Seeing what occurred on the Asian stock markets this morning, we thought we would post this. 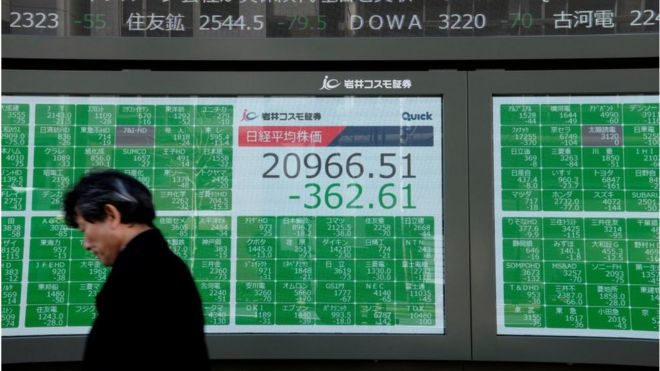 Many people have become very concerned about the economy because of the stock market’s plunge in the last two weeks. While the spread of the coronavirus gives us very good reason to worry about the state of the economy, the plunge in the stock market does not. In fact, those folks who are very concerned about wealth inequality can celebrate because the wealth of the top 1 percent has just dropped by around 10 percent, while the wealth of the bottom 50 percent has barely been touched. (I tend to focus on income inequality, in large part for this reason.)

Anyhow, the stock market does not generally provide us with very good insight into the future of the economy, except when it looks like more of the same. It’s sort of like hearing the weather forecaster tell you it’s sunny, as you step outside into the sunlight. You didn’t really need them for this purpose. When it comes to telling about the storm just around the corner, the stock market is a much worse predictor than weather forecasters.

We don’t have to look to ancient history to see this point. In October of 2007, the S&P 500 hit what was at the time a record high. That was less than two months before the beginning of the worst recession since the Great Depression. The stock market did not give us much warning on that one.

As I noted last week, the run-up in the stock market in the last few years had pushed price-to-earnings ratios to unusually high levels. I did not argue that this necessarily implied a market plunge, but I did point out that as a matter of logic, high price-to-earnings ratios virtually guarantee low returns in the future. For this reason, a sharp market downturn should not be a surprise, even if the specific cause is.

If the stock market is not a very good predictor of the economy’s future, it is also not generally a causal factor. There is a sort of fairy tale story that a high stock market is good for the economy because it means that companies can effectively borrow cheaply by issuing new shares. In this fairy tale, that means that they can more easily raise money for investment, which means more growth and higher productivity and wages.

The problem with this story is that companies rarely issue new shares of stock to finance investment. Most often large share issues are done to allow early investors to cash out some of their holdings. Companies will also issue shares to adjust their debt position. For example, if they issued bonds that pay a high-interest rate, high share prices may give a company an opportunity to issue shares and use the money to retire some of its debt. However, it is rare that a company issues shares to directly finance investment.

The one major exception to this rule was during the stock bubble of the late 1990s. In that bubble, new companies, many of which did not even know how they could make a profit, were often able to raise hundreds of millions, or even billions, on initial public offerings. In that context, the plunge in the market from 2000 to 2002 did lead to a sharp reduction in investment, as this channel of financing largely disappeared. (The Nasdaq, where most of these new companies were listed, lost more than 80 percent of its value from peak to trough.)

The plunge in the market in 2000-2002 also had a major impact on consumption, as more than $10 trillion in stock wealth (roughly $20 trillion relative to today’s economy) was destroyed. Stock wealth was clearly driving consumption at the end of the 1990s boom, as savings rates fell to what were then record lows. (The housing bubble pushed the savings rate even lower.) It was not only the wealth itself that drove consumption but the expectations of future stock rises. It was common at the time for otherwise sane people to expect that the stock market would produce double-digit nominal returns for the indefinite future.

Anyhow, this sort of causation from a stock plunge to a recession is not plausible today. Investment is already weak and clearly not being driven by the stock market. And, savings rates are considerably higher than they were in the years of either the housing or the stock bubble. Losing 10 percent of the market’s wealth will surely have some negative impact on consumption, but almost certainly not enough to cause a recession.

The Coronavirus and the Economy

While the drop in the market by itself may not be bad news, the prospect of the spread of the coronavirus certainly is. In addition to the very serious health risk it poses to tens of millions of potential victims, it also could have a very large economic impact.

There already has been much written how the efforts to contain the disease in China have led to the shutdown of many factories, leading to shortages of important production inputs here. This can force factories to curtail production until alternative sources of supply can be found or Chinese suppliers are back up and running. But this is just the beginning of the sorts of economic disruptions that we may see if the coronavirus spreads quickly across the United States.

In a Huffington Post piece, Hayley Miller and Arthur Delaney examine the economic consequences of the sort of school closures that we have seen in Japan and elsewhere. A large percentage of the affected workers will be forced to stay home since they will be unable to make alternative child care arrangements. This could mean millions of workplaces are unable to maintain normal operations since they are understaffed. Look to longer wait times at everything from restaurants and barbershops to doctors’ offices and hospitals. The lines at the latter will also be affected by the increased demand from people who either are infected with the virus or are worried that they could be.

If the coronavirus becomes very widespread, we could see enormous economic impacts. If people become very worried that they can catch the disease if they go out in public, this will mean many fewer people will go to restaurants, sports events, movie theaters, and concerts, or anyone else where they are likely to be in close proximity to large numbers of people. Many of these businesses are likely to shut down, at least until the major threat of the virus has passed.

Plane travel will also be drastically curtailed, as few people will want to be on a crowded plane, which could include several people with the virus. That will be a huge blow to the tourism industry, as people put off vacations, until the threat lessons.

There are few areas of the economy that would not be affected if the virus becomes as widespread as was the case in Wuhan China and possibly now in parts of Japan. It would be good if the United States had an effective public health team that could take the necessary steps to limit the spread of the virus. The Center for Disease Control (CDC) does have top-notch experts in this area.

However, it is not clear that they will be making the big decisions. Trump has placed Vice-President Pence in charge of the response to the epidemic. Pence is a person who does not believe in evolution or climate change. In other words, science is not his strong suit.

Furthermore, it is clear that Trump and Pence are more worried about the politics around Coronavirus than effective steps to stop its spread. They have demanded that all public statements about the disease must first be cleared with Pence. They have already acted to punish a whistleblower who called attention to the fact that passengers exposed to the virus on a cruise ship were greeted by people without protective gear and without medical training.

We may still get lucky, and the spread of the virus may be fairly limited in the United States. But with the containment effect being led by a bunch of vindictive clowns, people are quite right to be worried about the public’s health and prospects for the economy.

Vanessa Bilancetti – From Berlusconi to Weinstein to Westminster: Why we need a feminist political economy

Beyond all the salacious sensation around Harvey Weinstein and his cohorts at Westminster in the mainstream media, this event could be an important turning point in the Western world. Vanessa Bilancetti looks past the headlines […]

Since we are all heading for lockdown again, we thought it might be useful to post a few longer pieces to keep you occupied. We may not come out of this as better people, but […]