Many economist have been claiming that the International Monetary Fund has learned from its past mistakes, especially as it has recently published papers pointing this out and promising change. Change however never comes, as we are currently seeing in Ecuador. 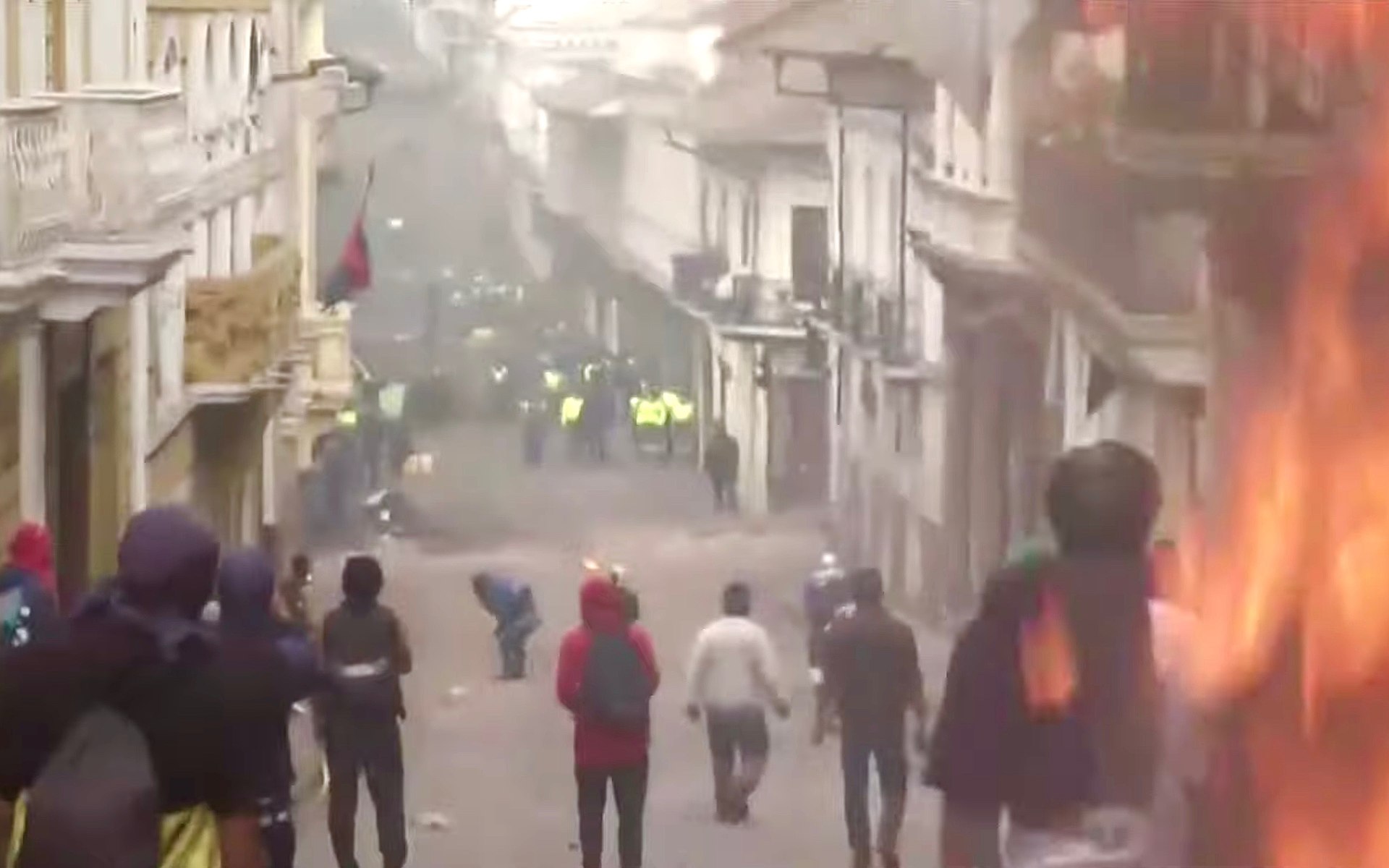 With a stubborn stance that almost led to political suicide, the Ecuadorian government of Lenin Moreno used savage police and military repression against thousands of indigenous people, students, residents, and workers who had risen massively throughout the country against his “economic package” imposed in October 1. Eventually, the strength of the people prevailed and Moreno withdrew the infamous Decree 883 after 12 days of demonstrations. The social cost of these protests was high: 8 dead, 1,340 injured and 1,192 incarcerated.

The oil price plunge of 2014 and the subsequent US dollar have hurt the Ecuadorian economy. To finance growing fiscal imbalances, the previous government resorted to central bank financing. Public debt doubled over the past five years and international reserves fell to very low levels.
Erroneously, the Moreno government banned government’s indebtedness with the Central Bank and other public banks and resorted to bond issues at high interest rates. Finally, last March the government decided to request a $4.2 billion loan to the IMF.

The 1 October economic package – which was one of the conditions attached to the loan requested from the IMF – was seriously harming most citizens, damaging the economy, and not contributing to solving any of the fiscal or current account problems of Ecuador, even putting the nation’s dollarization system at risk (Ecuador uses the US Dollar as its currency). As David Suárez, from the Centro de Derechos Económicos y Sociales, has claimed, the conditions of the loan involve commitments that constitute international obligations by Ecuador, which, according to Article 2.1 of the Vienna Convention, give the agreement the status of an international treaty. Article 84 of Ecuador’s Constitution gives rise to the conclusion that the agreement should have been considered and approved by the National Assembly, in order to ratify its validity and bring it into force. Despite this, Moreno’s government kept secret the fundamental details of the agreement, resulting in legal action by human rights organisations in Ecuador to request deferment of the agreement and that the question of its legality be referred to the Constitutional Court.

It is not the first time that the IMF demands illegal measures to be implemented on a country requesting lending. For Europeans, Greece is a very recent and painful example of IMF’s illegal behaviour. In its intervention in Greece, as a member of the Troika, the IMF violated the Greek Constitutions as well as human rights. It is worth noting that the European Convention on Human Rights has repeatedly held that while obligations under the ECHR do not preclude States cooperating in certain fields of activity, the obligations of Contracting Parties continue even after a State has transferred certain competences to international organizations. IMF Member States are thus required to comply with their existing human rights obligations including when acting under the auspices of the IMF. Furthermore, the IMF as an international organization subject to international law, is ‘bound by any obligations incumbent upon them under general rules of international law, under their constitutions or under international agreements to which they are parties’. The IMF is required to refrain from steps that would undermine the possibility of a borrowing State complying with its own national and international human rights obligations. The IMF, moreover, is bound by the general principles and purposes of the UN Charter as a specialised agency of the UN. These general principles and purposes include respect for human rights and fundamental freedoms. Sadly, this has not been the case in most IMF interventions.

In Ecuador, the fact is that the alliance between the government, the chamber of commerce, the association of private banks, and other business associations, had submitted, apparently rather happily, to what the International Monetary Fund (IMF) dictated in the agreements it signed with the regime in March 2019. President, vice-president and ministers followed the usual libretto: ‘there is no alternative’, they claimed. They maintained that it was necessary to eliminate subsidies for fuel (petrol and diesel), in order to avoid putting Ecuador’s dollarization at risk. They obsessively asserted that public spending had to be cut, even at the cost of unconstitutionally violating the labour rights of state employees. And they propagated a position, that it is of “common interest” to lighten the financial burdens on importers and the business sectors, by eliminating or lowering tariffs and lowering the tax on capital outflows (ISD).

Central to the IMF’s imposed policy was the elimination of subsidies: the price of petrol would have increased in price by between 60% and 75%, depending on the quality. The cost of diesel would have surged by more than 200%. Additionally, all goods and services would have risen in price (in an already expensive country). This is why the small farmers of the Sierra mobilized immediately, because this measure increased their transport costs and the price of all products (especially those bought from the urban sector), pushing them further into poverty. It should be noted that rural poverty rose from 38.2% from December 2016 to 43.8% in June 2019, while extreme poverty rose from 17.6% to 17.9% during the same period. We also understand the reaction of secondary school students, university students, and residents, especially from Quito, since poverty in the capital increased from 7.9% in June 2016 to 11.9% this year; and extreme poverty from 1.7% to 3.6% as well. The rise in transport prices in Quito, for example, means that a person who takes 4 buses a day would see transport costs climb from 1 dollar a day to 1.40 dollars (42 dollars a month), equivalent to 10.6% of the monthly minimum wage. It must be mentioned that Ecuador’s previous governments who rejected engagement with IMF had succeeded in reducing poverty over the past two decades. The percentage of the population living below the national poverty line had fallen from 64.4 percent in 2000 to 21.5 percent in 2017 and the share of the population living below US$1.90 a day fell from 28.2 percent in 2000 to 3.6 percent in 2016.

Moreno’s government also announced that the salaries of public employees would be reduced, through measures such as reducing the remuneration with the renewal of temporary contracts by 20%; the contribution of one day’s salary per month to the government, and the reduction of the number of days of yearly vacation to 15 days. These are brutal measures in a nation where permanent jobs with a wage fell from 41.2% in December 2016 to 37.9% last June; and where the forecast for economic growth this year, according to the IMF itself, is -0.5%. If prices rise, growth is negative, and wages are frozen or even fall, the logical result would be a fall in purchasing power and a tremendous deterioration in living standards. These measures were flanked by a discourse claiming that public servants are lazy and unproductive persons (that’s why they cut the number of days of vacation by half). This is just part of the broad usual attack on the public sector by the IMF, including the obligatory neo-liberal proposal, of privatizing public assets.

Contrary to the decline in the living conditions of a broad swathe of the populace, were the benefits to be heaped upon the importing and business sectors. This would have further undermined the current account balance. In a dollarized country, where the non-oil trade balance closed last year with a negative balance of $4,958.5 million, the Ecuadorian government under pressure from the IMF had decided to eliminate or reduce tariffs for capital goods (machinery, equipment, as well as agricultural and industrial raw materials), cell phones, computers and tablets. The capital outflow tax (ISD) was also to be reduced by half for some imports and the tax for vehicles, which cost less than $32,000. All these measures would have a negative impact on liquidity due to the outflow of dollars, thus compromising dollarization.

It was obviously outrageous that in an economy in decline since 2017, where bank profits have risen from USD 396 million in that year to USD 554 million in 2018, the “economic package” of October 1 was aimed at increasing the profits of these major economic sectors. As a public relations sop, the government decided to levy a minor tax on companies with incomes above $10 million per year, which would generate only $100 million per year for the treasury (less than 0.1% of GDP); as well as to eliminate – indiscriminately – the advance payment of income tax. These fiscal benefits would be added to those already received by businessmen with tax arrears or even tax evaders last year, when the government forgave them the fines, interest, and surcharges on debts with Ecuador’s Internal Revenue Service, with the Ecuadorian Social Security Institute (IESS), and with the municipalities, that amounted to around $4,000 million (close to 4% of the GDP).

According to the Minister of Economy’s the day after the fiscal package was announced, it would have generated revenues of $2,986 million and the “fiscal sacrifice” – read direct transfers to importers and businessmen – will be $713 million. On the other hand, the “social compensation”, an increase of 15 dollars per month to the “poorest”, will only cost $54 million, if it is for the 300,000 new poor, or USD 234 million, if it is for the 1.3 million citizens who would receive the human development bonus, in the best of cases. This was not clear at all. What was clear is that tariffs and tax measures do not contribute to solving Ecuador’s fiscal deficit, nor the problems of the external sector, nor the problems of productivity. Such measures would have aggravated the already deteriorated living conditions of the majority of low- and middle-income sectors of Ecuadorian society.

Ecuadorians have defeated Moreno’s government and temporarily stopped the IMF. However, the agents of capital will not cease in the attempt to pursue their neo-liberal shock agenda. Ecuadorians must beware and not let the government and the IMF manoeuvre past their recent achievements.

On Matthew Klein’s and Michael Pettis’ Book “Trade Wars Are Class Wars” and how to correct today’s egregious inequality. Dean Baker is a Senior Economist at the Center for Economic and Policy Research (CEPR) Cross-posted […]

Dimitar Bechev – Elections in Bosnia: More of the same, but there is a silver lining

Elections were held in Bosnia and Herzegovina on 7 October. Dimitar Bechev explains that Bosnian politics continues to be dominated by two ethnically defined poles, each with external support. The country will probably hold together as […]

Steve Keen – The Cormann Conundrum: Is the new OECD Secretary-General a friend or a foe of environmental action?

Mathias Corman with an atrocious climate change record seemed the worst possible candidate as leader of the OECD. Now he has been appointed to the position. Steve Keen is a Distinguished Research Fellow, Institute for […]