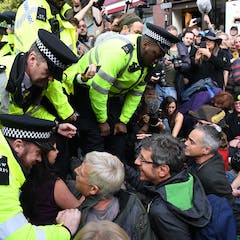 Extinction Rebellion is making people angry. After weeks of disrupting drivers in central London, protesters from the climate change activist group have enraged commuters by stopping Underground trains. Critics have come out in force. Stopping hard-working people from getting home by shutting down one of the lowest carbon forms of transport available will only lose you support, runs the argument. Which completely misses the point.

Those who criticise protesters for causing “disruption” are likely to be the same people who, a few years from now when serious climatic disruption is unsettling their daily lives, will complain that “nobody did anything”. Certainly protestors need to disrupt carefully (tube trains are surely not a good target), but without disruption of some kind, how else will urgently needed system change happen?

I’m reminded of the words of abolitionist Frederick Douglass:

If there is no struggle there is no progress. Those who profess to favor freedom and yet deprecate agitation are men who want crops without plowing up the ground; they want rain without thunder and lightning.

Extinction Rebellion should be used to criticism by now. They have also been told they are too middle class. That their targets are unrealistic. That they are misuing science to exaggerate the catastrophic nature of climate change. And that they are too reliant on fear to try to motivate people. Some of this criticism deserves consideration and some a defence. But there is another, overlooked problem that I think is a more serious threat to the movement’s goals.

The movement’s co-founder, Roger Hallam, is among those who has been criticised for saying climate change will kill billions and threatens the very existence of the human race, positions that scientists have said are not supported by the evidence. The question for activists is whether the science is not already alarming enough to win support for sufficiently radical climate action.

First, it’s not clear how many people supporting Extinction Rebellion, or whose attention has been grabbed by the movement, actually share these fears of an existential crisis.

As Alex Randall of the charitable Climate and Migration Coalition notes:

I don’t think that it’s Hallam’s inaccurate doom mongering that has brought people out onto the streets for XR. Rather, XR provided an organisation and a platform for people who were already worried enough to take to the streets. Hallam’s apocalyptic ramblings are not the driving force force behind their civil disobedience.

Meanwhile, “the science” – endlessly attacked and muddied – is not clear on the exact level of risk we face, and doesn’t say anything about how we should respond to it.

Perhaps the most often quoted source of evidence on climate change is the output of the UN’s Intergovernmental Panel on Climate Change (IPCC). It was designed as an inherently conservative organisation because the US didn’t want to be forced into international action by scientists, as it felt it had been over the issue of the ozone layer. As a result, the IPCC may well be underestimating the risks of climate change by erring on the side of least drama.

In fact, some scientists at the coalface of climate study are super scared of what’s going to happen. There’s also anecdotal evidence that some scientists are self-censoring, particularly with regards to how much warming the Earth is likely to experience. This may be because they are worried being bad news messengers may not be good for their careers, or a belief that only hope in preserving our current climate will encourage people to act.

This chimes with the criticism of Extinction Rebellion that inspiring fear will only demotivate people from acting, paralysing them by spreading the view that the situation is so hopeless that nothing can be done. This may or may not be the case (it depends). Fear certainly seems to make processing difficult information harder.

But writing as someone who has studied corporate resistance to the Australian carbon pricing system, I can tell you that a lot of the fear-mongering around climate change comes from those with a vested interest in the status quo. Even though a carbon price would have had very mild economic effects, coal companies and their allies repeatedly hired economists whose models “proved” such a price would provoke imminent economic Armageddon, in well-publicised “sky will fall” reports, every time a carbon price was proposed. Once such a scheme was finally adopted, it lasted just two years before it was scrapped. Fear can indeed be a powerful tool.

Ultimately, regardless of how many degrees of warming are likely, what we need is urgent action. And this is where we come to the bigger problem with Extinction Rebellion. Action doesn’t happen because of one-off mobilisations, but rather constant, specific pressure at all levels – local, national, international – by informed, engaged citizens who are in it for the long haul. This is regardless of what I call the “emotacycle”, a social movement’s predictable course of action inspired by emotion, taken whether or not it achieves the movement’s stated goals.

While protesters stop traffic in central London, local authorities around the rest of the country are largely getting away with declaring climate emergencies and then doing nothing. When the protests end, we have to hope that those who have braved the cold nights on thin cardboard will join with others for the excruciating boredom of town hall scrutiny committees.

If we are talking about the behaviour of activists having a bad impact on the possibility of radical climate action, it’s not the anger of commuters or the fear of children we should worry about. But rather it’s the feelings of disconnection that so many people feel after attending a badly designed and badly run activist meeting. Standing on top of a tube carriage will only ever get you so far.

Today is the 200th anniversary of what has come to be called the Peterloo massacre.  On 16 August 1819, 60,000 working people gathered at St Peter’s Field in Manchester England to demonstrate for the right […]

Capitalism’s newest spin. Michael Roberts is an Economist in the City of London and prolific blogger Cross-posted from Michael Roberts Blog Stakeholder capitalism – that’s the way to ‘shape’ capitalism into something inclusive of all.  […]