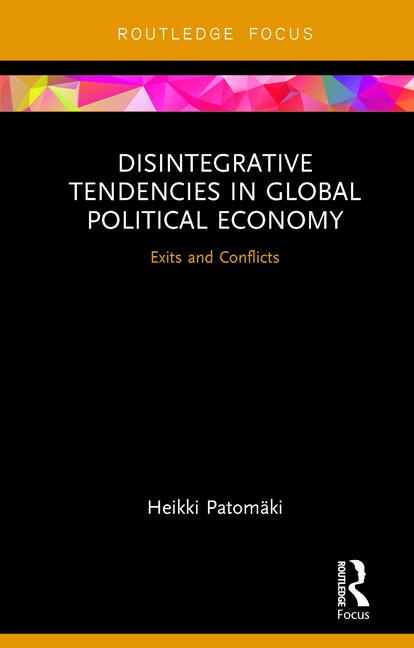 Heikki Patomäki is Professor of World Politics at the University of Helsinki, an academic with passions which, despite the scholastic format (and price) of his newest book,Disintegrative Tendencies in Global Political Economy: Exits and Conflicts, keeps breaking to the forefront. The author does not see himself solely as a scholar, but as an activist in the political process. He has run for public office, including for the EU Parliament.

In his book  Patomäki sees the world’s global political economy in crisis, as current structures crumble. He examines four recent developments as disintegrative paradigms: Brexit; the conflict between the EU and Russia in Ukraine; Donald Trump’s trade policy; and growing inequality. For Patomäki these phenomena are harbingers of worse to come.

Patomäki takes a sober look at the elements contributing to the crises he analyses and discovers unifying themes: “The main point is that market globalism is not sustainable.” This is destroying the political and ethical basis of our society, the social fabric that has defined nations, and obliterated the consensus concerning societal recognition and equality.  Referring to the theories of the Austro-Hungarian economic historian Karl Polanyi (who died in 1964), Patomäki points out that disintegrative tendencies are following a period of free market liberalisation and market interconnectedness.

In the case of Brexit he brings a number of diverse elements together. How great a role did Britain’s lack of identity with the rest of Europe or the ineffable political incompetence of then Prime Minister David Cameron play? On the other hand, as Patomäki explains, there is nothing new about Brexit. Europeans have repeatedly rebuffed the EU and its policies. Norway has voted against membership twice (Iceland just changed its mind about joining). That Conservative Eurosceptics were able to mobilise the “lower strata of peripheral parts of (UK) society!, is the result of the horrendous impact of neo-liberalism and the market globalism it is inexorably imposing upon national economies, in this case with the EU as its adjutant. The resulting deindustrialisation destroyed the secure existence of millions of Britons, replacing it with a deregulated gig economy. Add to this the policy of austerity that the EU inflicted upon those Europeans it had just relegated to precariousness. As Patomäki points out “existential uncertainty and insecurity” can trigger social-psychological mechanisms, such as resentment and emotional distancing. And the EU elite wonders where so many of what it views as neo-fascist anti-Europeans suddenly came from. For Patomäki, Brexit was the “attempt of those left behind in Britain to protect themselves from the predatory nature of market fundamentalism”. The EU’s neo-liberal regimen had prepared the field for the seeds of resurgent nationalism and populism.

Patomäki however sees opportunities in the making. Like any movement, the current rise of nationalism and populism, not only in Britain, but in many nations in the world, will inevitably end in crisis, when it cannot deliver upon promises of a better life – something we can currently observe with President Donald Trump in America.  To put more social responsibility back into the mix, however, means offering true social, democratic, and ecological alternatives to neo-liberalism.

Patomäki is a child of the enlightenment. Against the sensationalism of the media and the rhetoric of politicians he pits H. G. Well’s aphorism: “Civilisation is in a race between education and catastrophe”. The author breaks down the crises into their various pieces and tries to reconstruct them as possible solutions. The principal approach that he offers is holoreflexivity, whereby “one can see oneself as an active part of a dynamic whole,” incorporating a holistic rational “analysis of mechanisms, structures, and processes which is not only global but also planetary”. This has three elements:

This is the basis of Western civilisation, whose defining moment was its rejection of the tyrant in ancient Greece and the creation of civil society. In the case of the crises that Patomäki analyses, we discover at its heart a rebellion against the economic and political tyranny of neo-liberalism.

Book Review by Mathew D. Rose The highest praise that I have usually lavished on a book- and this book certainly fulfils this – is: “It has changed my way of thinking about a topic”. […]

Book review by Mathew D. Rose Universal Basic Income, or UBI as it is abbreviated, is without a doubt a popular topic. The problem is that behind the emotional hype there is a lot of […]