Society cannot function without the essential work that women do

Emily Scurrah is an Assistant Researcher at the New Economics Foundation 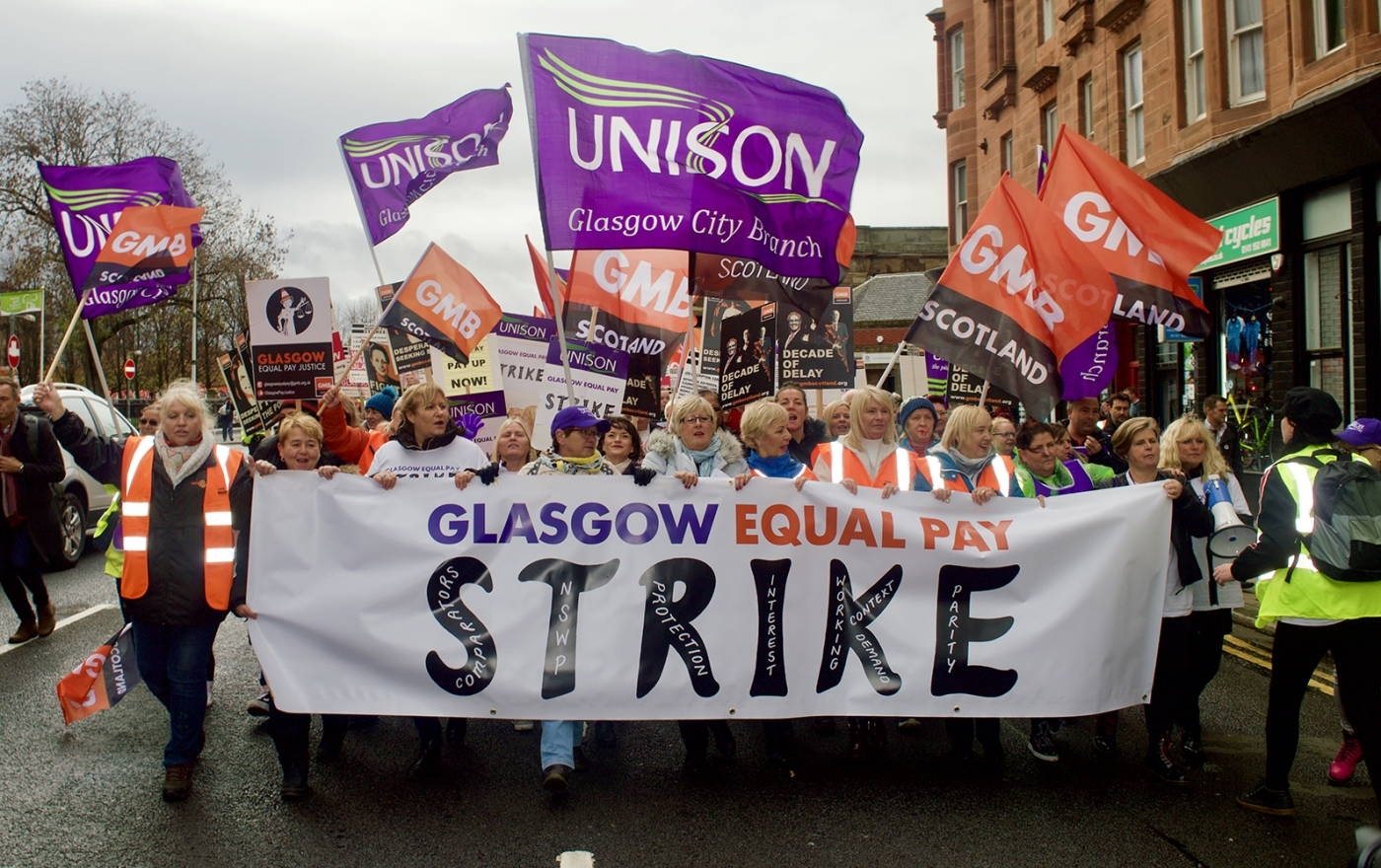 Last week, a group of women brought the city of Glasgow to a standstill. These women, an 8000-strong force of striking carers, cleaners and caterers, took to the streets following a twelve-year embittered dispute over gender parity in pay.

The origins of this strike are ironically in a 2006 job evaluation scheme to address equal pay, which resulted in female-dominated jobs like cleaning, catering and care work being paid up to £3 an hour less than male-dominated roles such as refuse collection and street sweeping. This was primarily because the new scheme effectively penalised those with irregular hours or on split shifts. In addition, a payment protection was granted to men who had missed out on past bonuses, whilst female workers were left with nothing – this was later deemed discriminatory by the Court of Session. The ensuing battle has been a lesson in the way that typically female roles are devalued and exploited, and women’s roles as workers are repeatedly undermined. By bringing the city to a standstill, people will be compelled to acknowledge the enormous and criminally undervalued contribution of women’s work in enabling our cities to function. The spectacle of striking workers is significant as it makes the hidden workers who juggle multiple jobs suddenly visible.

It’s not only the events leading up to the strike, but also the response that has gendered dimensions. A major point of contention from opponents of the strike is its impact upon people who use public services — the elderly and sick who rely on carers; the children in schools and nurseries who rely on caterers; the public who rely on cleaning staff in their community spaces. Similarly, opponents have pointed to the​‘undue pressure’ the strike will place upon local government — with the subtext of a strain upon essential public services.

The backlash to the strike has been predicated on a centuries-old misogynistic trope, which expects women to sacrifice themselves to provide and care for their children, partners and society at large. The vulnerability of those who rely on these services had prevented strike action up until now, but as one woman involved in the strike pointed out, some of the striking women are resorting to food banks to provide for their own families, despite many juggling two or more jobs. If the livelihoods of the workers are not protected, how can they be expected to fulfil their duties to care and provide for others? And unless they demand it, how can the workers expect to be protected by an economy that systemically devalues their labour?

On top of this, an attempt at appeasement of the workers came in the form of issuing a small payout just before Christmas. The women would be hard pressed to have turned down such an offer in an economic system that constructs and exploits massive expectations of parents during holiday season, despite the financial strain this might entail. This is a further example of the way in which women’s roles in society have been taken advantage of throughout these disputes.

What’s more, as a striking worker pointed out, emotional labour — and its resultant toll on the workers’ wellbeing — is completely overlooked in their pay packets. Care and emotional support for vulnerable service users fail to be acknowledged for the skills and responsibility that they entail. Using emotional blackmail to shame women for demanding that their right to fair pay is a dirty tactic on the part of the strike opponents. This is especially the case when low paid workers are resorting to food banks to provide for their families.

On top of the ​‘professionalised’ emotional labour involved in the sectors represented by striking workers, there is a further dimension to society’s exploitation of women’s labour. Evidence has shown for years now that women have been hardest hit by austerity and cuts. This has played out within the domestic sphere, through women taking on unpaid care roles and extra childcare responsibilities due to cuts. Women, who account for 90% of single-parent families, will be hardest hit by the welfare cuts from the rollout of Universal Credit, potentially losing up to £800 per year, whilst cuts to domestic violence services have put them at greater risk of danger. Council leader Susan Aiken stated that the workers did not know what they were striking for. This implies that the striking women are merely the puppets of their unions, and refuses to recognise them as fully cognisant political agents, as well as drawing upon distorted media narratives used to stigmatise unions. Low paid women are acutely aware that they are being penalised in both their professional and personal lives, and now they are pushing back.

Labour disputes have historically been the catalyst for wider political discussion about discrimination in society at large. It was the women striking in the Ford factory in Dagenham in 1968 which eventually led to the Equal Pay Act of 1970. Kimberlé Crenshaw also developed her work on intersectionality (a foundation of modern feminism), based on the way in which African American women workers at General Motors factory were discriminated against based on both their race and their gender.

We must stand in solidarity with the striking workers in Glasgow as they demand the fair wages that are so crucial to their and their families’ survival. We must also recognise the wider economic and political context in which they exist, where female paid and unpaid labour is systematically exploited. It is time we stop denying women workers respect, and instead acknowledge the essential work that women do – without which society would not be able to function at all.

The relationship between Britain’s current strike wave and Brexit. Philip Cunliffe is Associate Professor of International Relations · UCL Institute for Risk and Disaster Reduction (IRDR). He is also one of the founding editors of […]

Jarosław Kaczyński in his struggle to modernise the conservative Law and Justice Party (PIS), but not turning neo-liberal. It is a pity that the party is so denigrated by mainstream media as it is one […]