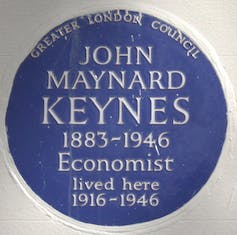 When people think of John Maynard Keynes, who died 75 years ago on April 21, they probably think of his ideas about economic demand and how government spending is essential to emerge from a recession.

England’s most famous economist is renowned as the one-time civil servant and Treasury adviser whose thinking dominated economic policy in the middle decades of the 20th century. He died at the age of only 62 after leading marathon negotiations for the UK over the post-war international financial system and the Anglo-American loan agreement.

But as a behavioural economist, I want to focus on another, lesser-known aspect of Keynes’ legacy. His views on what he referred to as “animal spirits”, or human optimism, represent an important part of behavioural economics today. This also underpins Keynes’ more famous ideas and has important implications for governments in their efforts to achieve an economic recovery from the COVID-19 pandemic.

First, I need to briefly outline Keynes’ main contribution to macroeconomic theory. He challenged the neoclassical orthodoxy of his day that an economy left to its own devices would spontaneously achieve full employment in the short to medium term.

Where neoclassical economists believed that supply determined demand, Keynes said that it was the other way around. Instead of prices and wages adjusting downwards quickly during an economic downturn, so that the demand could quickly adapt to the supply, Keynes said that markets were not perfect enough to achieve this – above all labour, since it was particularly difficult for firms to cut workers’ wages in harder times.

Demand was instead liable to stay low, and the economy could experience prolonged unemployment. To move the economy toward full employment, Keynes argued, the state had to intervene.

Keynes argued that people’s expectations contributed to keeping demand low, which is where his views on optimism come in. Consumers will buy less and entrepreneurs will invest less if they expect that the economy will be depressed for the foreseeable future.

In a radical shift from the view of most economists at the time and for decades later, Keynes thought that these expectations in people were not fully rational, but were essentially based on their psychology, or how optimistic they were feeling. As he explained in his most celebrated book, The General Theory of Employment, Interest and Money (1936):

Most, probably, of our decisions to do something positive, the full consequences of which will be drawn out over many days to come, can only be taken as the result of animal spirits – a spontaneous urge to action rather than inaction, and not as the outcome of a weighted average of quantitative benefits multiplied by quantitative probabilities.

With this in mind, Keynes saw government spending as crucial not only to sustain consumer and business consumption, but to nudge individuals so that their confidence in the economy stayed high, to avoid a collapse in their expectations.

This hinges on a view of human decision-making that is close to the view held by behavioural economists today (Keynes may well have influenced one of the key texts in the field, though this was never explicitly acknowledged). Human behaviour is not – or not only – the result of rational calculation using the information available, but is affected by things like emotions, false perceptions and rules of thumb.

After all, in a world where people are completely rational, increasing government spending would be much less effective. People would see their governments getting into more debt to increase public spending and they would know that taxes would probably rise in future to cover the cost. Instead of going out and spending any money they received from this government largesse, they would save it to pay for future taxes (the so-called Ricardian equivalence).

Interestingly, Keynes was more interested in the economic effect of public expenditures on things like bridges or railways than the public good they provided. If necessary, in the name of stoking demand and people’s expectations, “The government should pay people to dig holes in the ground and then fill them up.”

Keynes’ ideas on stagnation and unemployment were nurtured during the great depression of the 1930s. Observing the unemployed crowding on the streets was probably an important source of inspiration, and his recommendations were soon being adopted by governments around the world.

His influence declined in the 1970s, when economies were facing very different challenges in the form of low growth and high inflation (stagflation as it became known). Economists generally thought that increased public spending would only cause more inflation, so governments sought other answers, such as unleashing the power of business through deregulation and controlling the money supply.

It is certainly not by chance that there was a return to interest in Keynes during the global financial crisis of 2007-09, when it fell to governments to rescue the world economy from the consequences of the financial crisis.

Looking to the COVID era, Keynes would certainly be pleased to see the robust interventions of governments almost all over the world sustaining consumption and employment. But he would be much less happy to hear the discussions around deficit reductions that are starting to take place within the UK government and among Conservative MPs.

He would feel that these discussions would depress expectations, making economic recovery even harder. Though he would probably agree that governments must deal with their deficits at the appropriate time, he would also urge them to avoid such discussions until the pandemic and its effect on the economy is over.

Be it the Americans, Russians, British, Saudis, it does not matter who. Modern warfare is a humanitarain disaster with incredible numbers of civilian casualties. Patrick Cockburn is the author of War in the Age of Trump […]

During the leadership contest of Germany`s largest political party, the rightist Christian Democrats, climate change was not a topic. The debate in Germany concerning strikeing school students is not about climate change, but if kids […]

Lee Jones – Britain and the Self-Paved Road Back to Serfdom

Europe’s political class has failed its citizens. Economically, socially, and with regard to climate change. If you go beyond the mainstream media, you will discover that there is  a deep political dissatisfaction with this failure […]