Do not panic!  What appear to be confusing, complicated economic formulas are explained by Frances, so the article is accessible to all of us. And what she writes is of great importance. This is what Heiner Flassbeck terms the “German Model”, which has been forced upon the rest of the Eurozone. This is not globalism, it is mercantilism.

Sectoral balances can tell us so much about what is going on in an economy. Especially when they are expressed as a time series, as in this remarkable chart from the ECB: 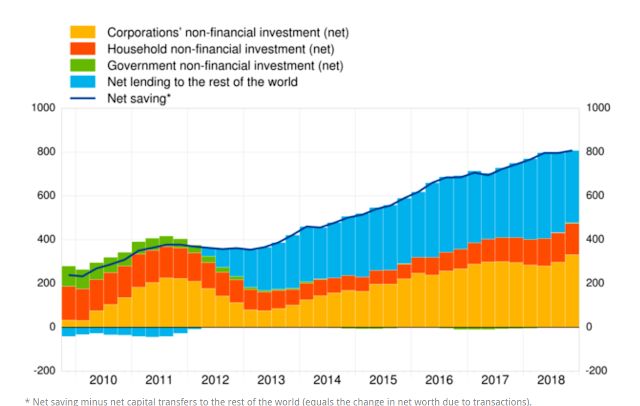 Although it is a time series, this is not a rate-of-change chart. The y axis is in billions of Euros, not in percentage growth rates. But the chart nevertheless shows that Eurozone net saving has risen steadily since the financial crisis, except during the Eurozone crisis of 2011-12 when it dipped slightly.

What do we mean by “net saving”? The legend appears to conflate saving with investment, and the brief explanation at the bottom of the chart doesn’t really help. So here’s some simple algebra to sort it out.

In national accounting, “saving” is the excess of income over desired consumption. For the private sector, it looks like this:

where Y is the net income of the private sector from all sources, T is tax payments, and C is all other consumption.

Thus, “net saving” is what is left over after the private sector has paid its taxes, met its other obligations such as rent and debt service, fed and clothed itself, and bought the latest Mulberry handbag. It is a residual. So when economists and politicians say “we need more saving in the economy,” what they really mean is people and corporations should spend less.

The public sector can also “net save”. It looks like this:

where T is tax revenue (the same T as in the private sector equation) and G is government spending. The OECD defines government net saving thus:

Net saving arises, and accrues over time, when revenues exceed expenditures without taking into account capital expenditures, such as public investment, transfers to publicly-owned enterprises or transfers to financial institutions (for instance, rescuing them during the financial crisis).

Thus, a government that is running a persistent budget surplus is “net saving.”

Putting private and public “net saving” together gives us this:

which is also equal to total net investment:

This identity is crucial. The chart above breaks down total net saving, S, into its investment (not saving) components:

where h is households, c is corporations, g is government and x is the rest of the world (positive sign here indicates outward investment, ie capital exports).

The chart shows us that since 2009, with the exception of the two worst years of the Eurozone crisis, the Eurozone as a whole has been investing like crazy. But as Adam Tooze observed on Twitter, the investment has not gone into the Eurozone: 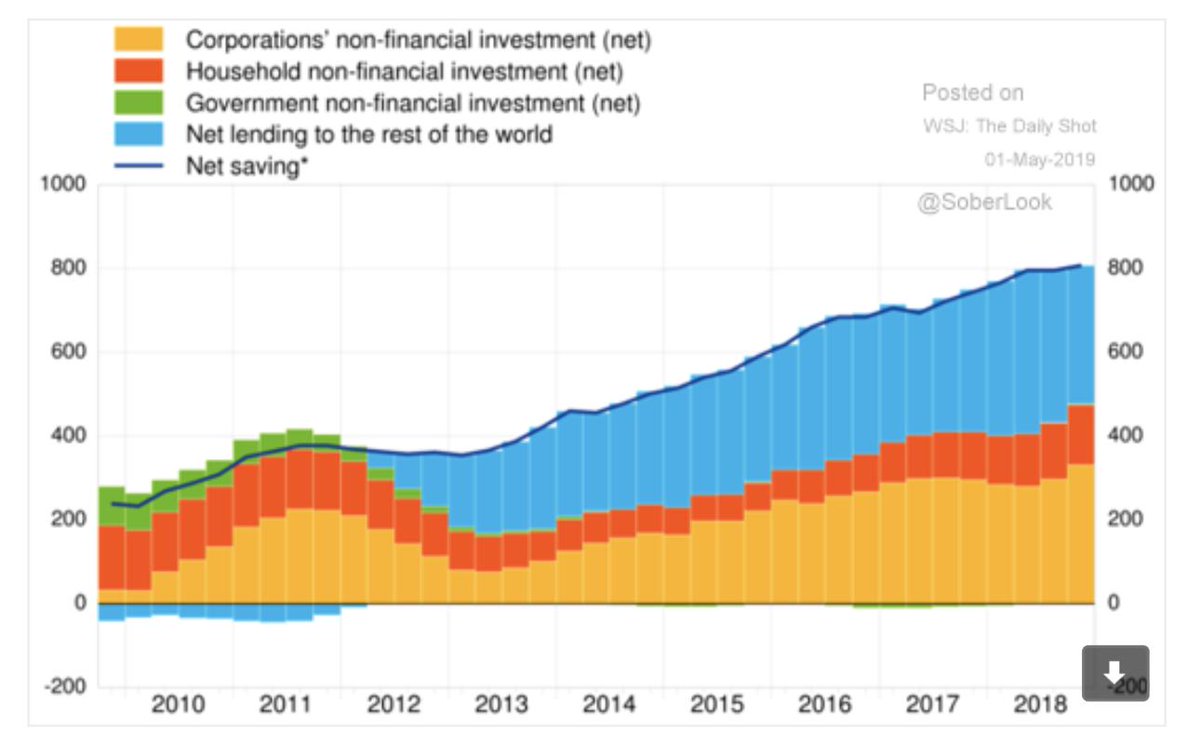 This data on Eurozone net saving should be retweeted daily! Large foreign lending is the flip side of the current account balance. But it is the low level of domestic investment and the complete absence of net public investment since 2012 that is truly dramatic.

It wasn’t only Eurozone corporations that stopped investing in the Eurozone. As Adam says, the growing external surplus is the flip side of the Eurozone’s current account balance. The chart shows that in 2011, the Eurozone abruptly switched from net borrowing from the rest of the world to net lending to it. This is consistent with a “sudden stop”, in which external investors abruptly pull their funds, causing severe economic damage. If so, then we would expect to see the current account switch from deficit to surplus at this time (net borrowing from the rest of the world indicates a current account deficit). And that is indeed what Eurostat shows:

The Eurozone’s “sudden stop” in the last quarter of 2011 is hardly news. Many people have commented on it. But the point is that it is driven by the behaviour of external investors. It was not just domestic investment that collapsed in the Eurozone crisis. External investment fled too. And the persistently wide current account surplus since then tells us that it has never returned.

Economies don’t always bounce back after a “sudden stop.” If investment doesn’t return, then the economy stays stuck in a slump. That is what has happened to the Eurozone. It needs much, much more investment. Investment by domestic corporations is slowly growing, but the ECB says that households are still deleveraging. And government investment is all but absent, as balanced-budget rules proliferate across the Eurozone and  Brussels threatens to impose draconian sanctions on any country that dares run much of a deficit. Meanwhile, external investors stay away, put off by the Eurozone’s poor growth prospects and rising political risks.

But the Eurozone authorities have very good reasons for pursuing policies that discourage external investment. The “sudden stop” in 2011 nearly destroyed the Euro. Those in charge in the Eurozone daren’t risk another one. The current account surplus, and associated capital exports, are protective. After all, if you never borrow from the outside world, they can’t hurt you. And if you are a net lender to the outside world, you have some leverage over them. Of course, they can still trash your currency, but as you don’t need to service external debt, that doesn’t cause you a major problem. It simply helps you to sell them more goods. Alternatively, they can refuse to buy your goods, in which case the loss of export income will make your population poorer. But hey, the people are already used to austerity, because that’s how you maintain your current account surplus. They won’t notice even more pain when the export income dries up.

In fact the Eurozone is behaving in much the same way as developing countries have since the Asian crisis of 1997, and for much the same reasons. Just as developing countries pursued export-led growth strategies and built up large FX reserves to protect themselves from sudden stops, so now the Eurozone, scarred by its own “sudden stop”, is doing the same. Perhaps Eurozone leaders think the investment chill that is causing the Eurozone’s poor growth, high unemployment and stubbornly low inflation is a fair price to pay to keep the Eurozone together.

But the Eurozone is not a young developing country whose population is generally living on a low income. It is a mature Western economy with a population that is used to a relatively high standard of living and whose net worth took an absolute beating not only in the 2007-8 financial crisis, but also in the Eurozone crisis: 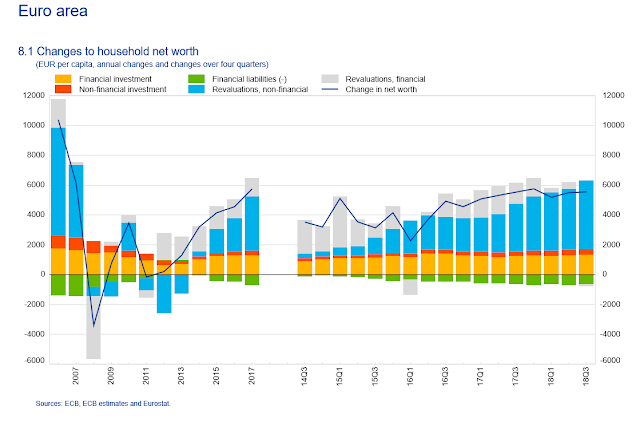 (chart from the ECB)

Rising property prices seem to be the only means the people of the Eurozone have of restoring their lost wealth. But for the young, already suffering from high unemployment, rising house prices mean an even more impoverished future. For how much longer will they tolerate this Long Depression?

During 20 years of reporting on the conflict, I learned first-hand that Israel’s version of events around the deaths of Palestinians or foreigners can never be trusted Jonathan Cook is an award-winning British journalist based […]

Hayley Stevenson – Global Climate Governance in an Age of Bullshit

George Hoare: The Full Brexit – towards a political theory of Brexit