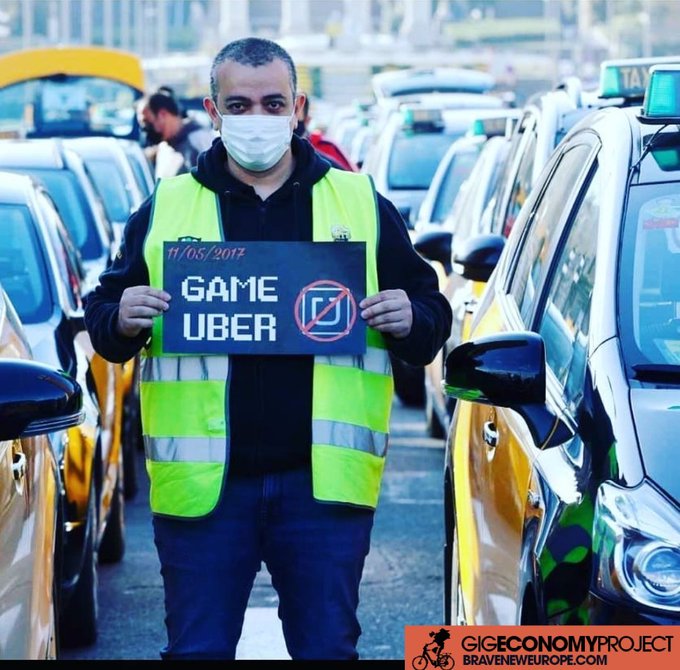 Uber, the global ride-hail platform, has sued the leaders of Barcelona’s taxi drivers unions for intimidation and collective boycotts, as part of its latest attempt to break back into the Catalan capital’s private hire market.

The Gig Economy Project reported in March on Uber’s botched return to Barcelona. The company officially re-launched in the city on 16 March claiming 350 licensed drivers ready and willing to use its app, despite the regulator, the Metropolitan Taxi Institute (IMET), stating that Uber were in breach of regulations because they were not offering a closed price fare. After protests by Élite Taxi association drivers – the main union for taxi drivers in the city – shutdown the city, the alleged support for the Uber app amongst licensed drivers melted away. Citizens are still unable to make bookings on the app two months after Élite Taxi’s resistance began.

Juan Galiardo, director of Uber in Spain, said of the complaint: “Hundreds of taxi drivers have registered to work with our new service. But this campaign makes many of them afraid to go out to work. After several months of continuous harassment of drivers who wanted to use Uber, and to ensure that they can use our app, we are filing this complaint.”

Élite Taxi Barcelona responded with a statement denying that they “coerce anyone”, but stating that they were happy to be considered coercive towards Uber as a company, “because we understand that the list of Uber’s criminal actions is overwhelming, from its now famous deception with the collaborative economy to the present day, and democracy deserves that someone unmasks this multinational, which persistently flouts the laws and harms the public interest.”

Th statement goes on to criticise ACCO, stating they are “not surprised” that Uber has taken their complaint to the competition authority “because this institution always moves under the protection of the most powerful interests”.

Élite Taxi added: “If they had something real to prove against us, they would have taken us to court, as we are going to do, and as we have had to do so many times against them, and they would not have turned to their friend ACCO.”

Writing on the Gig Economy Project following Uber’s failure to re-enter Barcelona, Carlos Rodríguez, Élite Taxi Barcelona’s community manager, stated: “We will continue to fight because the battle is not yet won. Barcelona will be the spearhead, the beginning of the end for Uber in Spain, but as would be expected in this David versus Goliath struggle a lot of work is necessary.”

The global ride-hail platform first appeared in Barcelona in 2014, and was met by months of strikes, traffic blockades and occupations, a movement that led to the formation of Élite Taxi Barcelona. An indefinite strike and protests in 2018 and further strikes in January 2019 led to tighter regulations being introduced in the city, and Uber deciding to fully withdraw operations from the Catalan capital (read more here).

Uber withdrawing from a major European metropolis due to pressure from a taxi workers’ movement is without precedent, and Alberto ‘Tito’ Álvarez was recently invited by taxi drivers in Brussels to speak at a virtual event about how to kick Uber out of the city.

Patrick Cockburn – Forget the Peace Process, the Focus Now Should be on Restoring Civil Rights to Palestinians