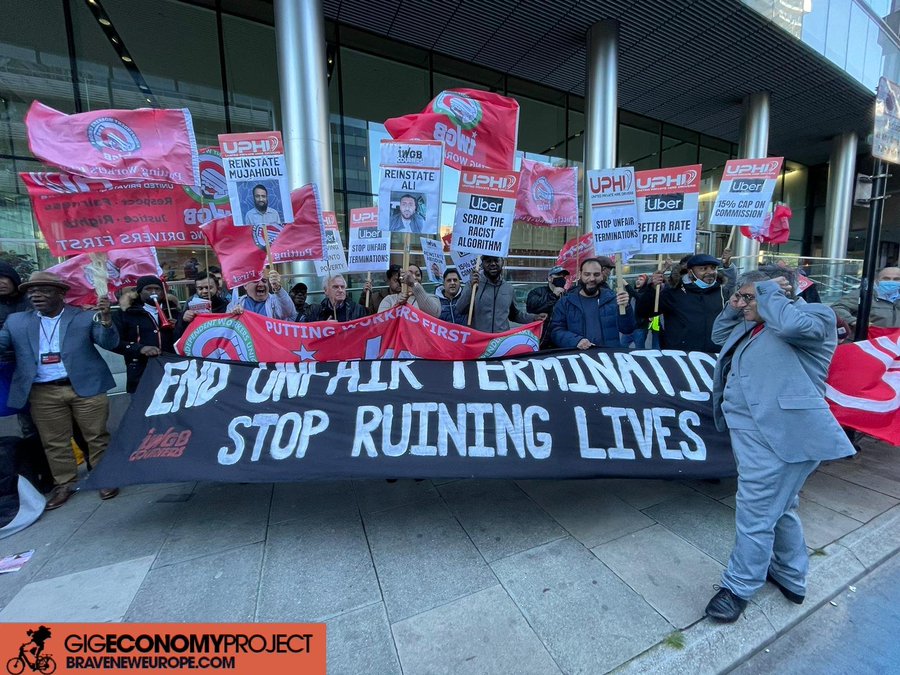 Uber drivers have gone on a 24-hour strike on Wednesday [6 September] in the UK, and have called for the support of the public to boycott the app, while new legal action against the ride-hail giant has also been announced over its “racist” facial recognition software.

The striking drivers, organised through the United Private Hire Drivers (UPHD) branch of the IWGB union, are demanding an end to unfair terminations from the app and the scrapping of the facial recognition system which the union claims has led to the termination of at least 35 drivers due to mistakes in the software.

The Microsoft system has been used by the company since 2020, despite Microsoft admitting in 2019 that the system did not work as well for black and minority ethnic (BAME) people. One report found that the software fails for one-in-five female BAME and one-in-20 male BAME. A recent survey found 90 per cent of Uber drivers in London are BAME.

The IWGB legal action is a claim for indirect racial discrimination on behalf of one of its members whose Uber account was terminated following an alleged facial recognition error. The driver, who has asked not to be named, had his photo rejected by the Uber app twice in 24 hours, locking him out of his account. Four days later, his account was deactivated, with Uber sending a message stating: “Our team conducted a thorough investigation and the decision to end the partnership has been made on a permanent basis. The matter is not subject to further review.”

The Supreme Court ruling in February which found that Uber drivers were workers not independent contractors also affirmed the right to protection from discrimination. The IWGB say their court action could lead to Uber having to replace the Microsoft software.

Striking drivers mobilised at the Aldgate Tower in London at 11am.

Speaking ahead of the strike, Nader Awaad, Uber driver and chair of the UPHD branch of the IWGB, said: “This movement is gaining real momentum now because we know that we must stand up for our rights if we want them respected. The gig economy is growing faster than ever and must not be allowed to remain a place where the bosses keep all the profits and the workers bear all the costs. We didn’t make it through three lockdowns to settle for that world. We will not be treated as second class citizens. We deserve equality, fair pay and job security and we are prepared to fight for it.”

The strike is also being backed by Black Lives Matter UK, which stated: “The impact of Uber’s facial recognition algorithm reflects a complete lack of care for black people and their livelihoods. The gig economy, which already creates immense precarity for Black key workers, is now further exacerbated by this software that prevents them from working at all, purely based on the colour of their skin. Racist practices such as these must come to an end.”

Henry Chango Lopez, General Secretary of the IWGB, said: “Uber’s continued use of a facial recognition algorithm that is ineffective on people of colour is discriminatory. Hundreds of drivers and couriers who served through the pandemic have lost their jobs without any due process or evidence of wrongdoing and this reflects the larger culture at Uber which treats its majority-BAME workers as disposable. Uber must urgently scrap this racist algorithm and reinstate all the drivers it has unfairly terminated.”

Responding to IWGB’s legal action, Uber stated that it “strongly refutes the completely unfounded claims”, that the facial recognition checks were “designed to protect the safety and security of everyone who uses the app by ensuring the correct driver is using their account” and that “there is always a minimum of two human expert reviews prior to any decision to remove a driver”.

The IWGB has represented over 200 drivers who have been terminated by Uber in the last year alone.

The Gig Economy Project spoke to Brian Forwood in July, a former Uber driver who’s account was terminated because of what he claims was a false customer complaint. He wasn’t given any due process by the company, despite working for Uber for 12 years.

We also spoke to Abiodun Ogunyemi, an Uber Eats courier who was locked out of his account after the facial recognition software kept failing.

“Sometimes when you want to log-in, they ask you to upload a live picture,” Ogunyemi said. “And there are two options: allowing the algorithm to recognise your face, or by human recognition. So, I did the algorithm ones, and every time I tried to do it the machine couldn’t recognise my face, so I ended up having to use human recognition; through human interviews. And it wasn’t the first or second or third time that I had to do it this way, it was happening a lot.”

Over 60 MPs signed a motion in the House of Commons supporting IWGB’s campaign for a fair system of terminations in the gig economy.

As well as the demands over ending unfair terminations and scrapping the facial recognition system, the union is also calling for a liveable wage for all drivers, through introducing a better rate per mile, a 15 per cent maximum commission taken from Uber, transparency of charges on customers, an end to fixed-rate trips, and a 50 per cent surcharge on out of area trips. 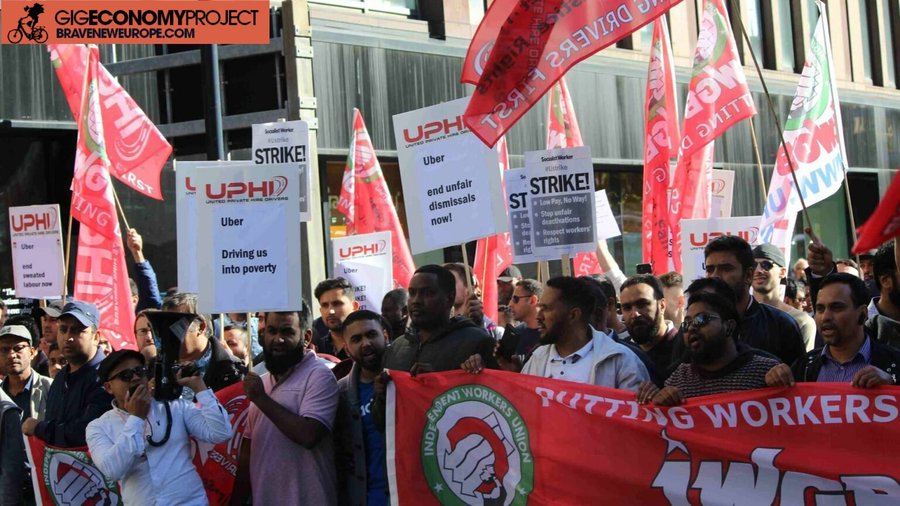 Writing ahead of the strike in Novara Media, Rema Diallo, Uber Driver and member of the UPHD branch of the IWGB, said that “Uber has attempted to undermine the Supreme Court’s judgment at every turn”, highlighting the fact that the Supreme Court judgement that drivers should be paid for waiting times while using the app has been entirely ignored by the company, which continues to pay only from pick-up to drop-off.

“This means our real pay can still be well below the minimum wage, forcing us, and our families, into poverty,” Diallo explained. “The minimum wage is supposed to only be a floor, not the limit of our ambitions. While it is outrageous that the company is failing to meet even the most basic standards, we are demanding more than that. We are striking tomorrow for a liveable income.”

The strike comes just a week after the App Drivers & Couriers Union (ADCU) Uber strike in the UK, and ADCU also announced a legal action on Tuesday over the Microsoft system of facial recognition used by Uber, which is being backed by the Equality & Human Rights Commission.

Michael gives his prediction for the worldwide economic development in 2022 Michael Roberts is an Economist in the City of London and a prolific blogger Cross-posted from Michael’s Blog At the beginning of each year, […]

Once again just an incremental step by the EU. We are still far from tax justice. The Tax Justice Network is an independent international network whose core mission is to ‘change the weather’ on a […]