The university strike in UK has seen some dramatic developments this week. In his third report (read the first here the second here) Michael Mair brings us up to date.

Dr Michael Mair is a Senior Lecturer in Sociology at the University of Liverpool and works on politics, accountability and contemporary warfare and conflict. 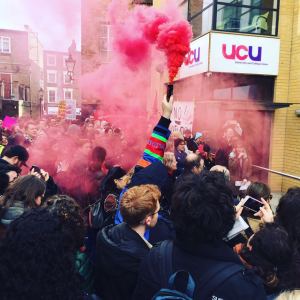 The fourth week of the UK’s university strike has been a dramatic one. On Monday the employer’s body, UUK, was in disarray, the rationale for its proposals questioned on all sides. Some universities began promising not to dock any wages from striking staff due to the incoherence of the proposals which had sparked the dispute in the first place, vindicating the action staff had taken and adding further pressure on UUK to back down. Another wave of expenses scandals and critical commentaries made the front pages of local and national newspapers (see, e.g., here, here and here), exposing university management to further charges of greed and pork-barrelling. Those on strike could thus be forgiven for thinking a positive resolution was well within reach. Across the UK, branches of the University and College Union, UCU, met to discuss what they would regard as a positive outcome. There was near unanimity; not only for the pension proposals to be abandoned entirely but for the articulation of new demands setting out the bases for progressive change across higher education as a whole in the UK. Uncompromising industrial action was clearly working.

As discussed in an earlier post on the strike, strikes are educative. Some lessons come harder than others however. History shows industrial disputes are never easily won and there can be several decisive junctures that must be successfully passed through on the way to winning them. Monday night was one such critical moment in the history of this strike. Returning home, picketers found news of a potential deal: UCU negotiators had arrived at an ‘agreement’ on the proposals with UUK. But the agreement was deeply flawed. Although the pension would not be fully financialised as initially proposed, there would be a 19% cut in pensions overall, there would be new caps on payments and the whole matter would be visited again in three years-time with no guarantees that the original proposals would not come up again. Adding insult to injury, striking university staff were being directed by their own union to make up for work missed, thereby retrospectively nullifying their withdrawal of labour and undermining the bases of future disputes. The disjuncture this revealed was stark – the negotiators seemed to inhabit a different universe to the university staff who had already committed so much to the strike and there was widespread dismay that any such agreement could have been put forward, a situation expertly described and dissected by Ed Rooksby, among others.

This disjuncture between university staff and those negotiating on their behalf might have been expected to weaken resolve and break the momentum that had been so successfully built around the strike. In fact, it has had the reverse effect: the appearance of the proposal has further strengthened and mobilised university staff. Calls immediately went out to reject the proposed deal in its entirety and information spread quickly. By Tuesday, branches around the country were intensively lobbying members of the union’s national executive to vote against the deal. The same levels of rigour, organisation and passion that had been brought to the picket lines were brought to the business of over-turning the new proposal. Due to the pressure from below, the union’s executive withdrew its support. Those on strike know this dispute can be won and that belief has now been communicated unambiguously to the union’s leadership. As a result, 14 more days of strikes have been called with room to escalate the dispute indefinitely if required.

This industrial dispute will ultimately come to be assessed by how well we, as university staff, dealt with the sorts of juncture points we have had to negotiate this week. But just as there are lots of ways strikes can be lost, there also lots of ways they can be won. That we did successfully fight off this particular deal hinged, crucially, on collective recognition that there was a fateful disjuncture between the body of the union and its negotiators. From that shared starting point and based on the relationships forged on the picket lines and in publicising the strike in new and old media, university staff were able to claim collective control over the dispute and how it will be resolved. That we were in a position to articulate our position collectively shows how much we have already achieved and how far we have come. We now see things differently and will not be deterred. The same applies to students. Their support remains strong with a wave of peaceful occupations of university buildings across the UK in solidarity with the decision to reject the deal and continue the strike. At a difficult moment, then, this dispute has been given a new lease of life. Britain, as a society, is relearning how to fight for workplace rights. By maintaining our resolve and seeking the victory we know we can secure, the university strike will provide significant lessons for the disputes and action to come.

Steve Keen – The Delusional Leaders of the Eurozone

Steve Keen too has a look at 20 years of the Euro. Steve Keen is an economist. He is an expert on Minsky’s Financial Instability Hypothesis, and is one of the handful of economists who […]

…says the former diplomat Craig Murray. It always has been an option and will always be. Craig  Murray is a British former diplomat, political activist, human rights campaigner, blogger, and whistleblower Cross-posted from Craig’s website […]