Austerity continues unabated in Britain and the EU. Behind a conflict that  obsesses corporate media lies a basic consensus: neo-liberalism

One does not need to be radical to see that a spectre is haunting Europe – the spectre of citizen vengeance for fiscal austerity.

Across Europe austerity policies have undermined support for the European Union.  From Italy comes the most recent evidence verifying public outrage at the dysfunctional fiscal policies of the European Commission, championed with religious zeal by the German government.  In addition to its destructive and immediate impact on the welfare of citizens, fiscal austerity depresses economic growth.

Recent claims of growth recovery, especially those lauding euro zone performance, represent a mixture of low expectations and misrepresentation.  The recovery is by historical comparison modest, indeed.  The average across euro zone countries is only a bit over a 2% annual rate, with the German “powerhouse” even lower.  More importantly, economic growth rates grossly overstate the extent to which countries have recovered.

The chart below shows the change in domestic goods and services, those available to the population of each country, from the beginning of 2008 through the second quarter of 2017.  Over these ten years (41 quarters), for only four euro zone countries was the increase as much as ten percent.  The four are among the smallest countries of the 19 member euro zone (Malta with the lowest population, Luxemburg second lowest, Estonia fourth and Slovakia 11th).  At the other end the change was negative for five countries, two of which are among the largest members (Spain and Italy).  By contrast only one of nine non-euro countries showed a negative change (Croatia). 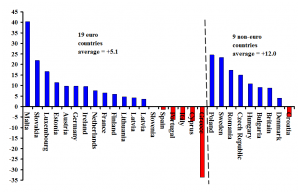 Source: Author’s calculations based on statistics from Eurostat. Domestic goods and services equal gross domestic product minus the trade balance.

This is a dismal outcome by any assessment, real domestic improvement of a meagre 0.5% per year across the euro zone and barely above one percent for non-euro countries.  The result is all the more dismal when we focus in on the euro zone countries, where in every country but one rising trade surpluses left the increase in domestic goods and services well below the increase in gross domestic production.

To put it simply, the mercantilist drive for “competitiveness”, a trade surplus, has substantially reduced the benefits of growth.  For example, during 2008-2017 Irish GDP increased by 35% while the domestic availability of goods and services rose by less than 10%.  Even more extreme was Portugal, where the export boom left residents worse off.  GDP increased by 30% and domestic goods and services fell by over 5%.

The explanation for this dismal performance, immiserizing growth, has a clear cause, fiscal austerity.  The chart below shows the change in government current expenditure during 2010-2017, eight years that should have brought robust recovery to EU countries.  Of the nineteen euro zone countries five show decline or no change (Slovenia).  When the statistics in the chart on current expenditure are matched with economic growth rates for the same years, the relationship is strikingly close.  There is a one-to-one link between percentage changes in expenditure and the rate of economic growth.  Fiscal austerity kills growth.  It is that simple. 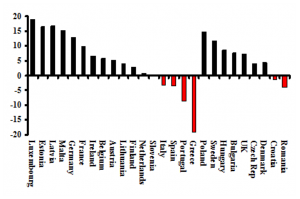 Source: Author’s calculations based on statistics from Eurostat. No statistics for Cyprus and Slovak Republic.

It is beyond reasonable doubt that fiscal austerity and its associated mercantilist trade policies are undermining economic growth and domestic welfare throughout across the European Union.  They magnify the inequalities among and within those countries, a result verified by the World Bank.  As a result voter revolts against the euro and the Union itself should come as no surprise.

What is surprising is that the response of politicians in Brussels and Berlin to the EU’s austerity-driven crisis of legitimacy – more of the same.  The recent EC “European Semester Winter Package” assessing economic performance of member countries maintains an almost obsessive focus on budget balances, asserting that the “Commission has now concluded that 11 out of the 12 Member States examined are facing either [fiscal] imbalances (8) or excessive imbalances (3)”, with Italy listed prominently as one of the “excessive” offenders.

The “Semester Package” could be dismissed as no more than a bureaucratic exercise.  Much more serious are two personnel changes at the top of the EU hierarchy.  Just last week in a move shocking in its lack of transparency even by the standards of the European Commission, the German national and austerity advocate Martin Selmyar became EC Secretary-General.  The outrage generated in the European Parliament should be welcomed but will have little practical impact on this fait accompli  in the consolidation of austerity policy.

It did not take a leftist to see the mistake of appointing Selmayr.  Co-chairman of the European Conservatives and Reformists Group, Syed Mamall, said: “How does the Commission expect people to believe that the EU is capable of change and listening to the voters when the process for appointing to top positions is so opaque?”

As bad as the appointment of the widely disliked Selmyar may be, far more dangerous is another German, Jens Weidmann, the probable replacement of Mario Draghi as head of the European Central Bank.  As should be expected from the head of the Bundesbank, Weidmann would be the polar opposite of his Italian predecessor; by his own description he is a hard-line advocate of tight money policy.

In his keynote speech to a meeting of the Bank of International Settlements, Weidmann left no doubt where he stands on fiscal  and monetary policy.  Not withstanding the major declines in fiscal deficits across the euro zone, the ECB president-in-waiting told his audience,

[Despite] the recent deficit figures for the currently favourable business cycle, one cannot fail but see that consolidation has in effect stalled in the euro area member states… In the European monetary union…fiscal discipline is absolutely essential.

We now have an austerity zealot at the helm of the EC civil service, a large centre-right majority in the European Parliament, and not one large EU country with a progressive government.  Add to this solid-right control the imminent possibility of a reactionary as head of the European Central Bank.

I began with a paraphrase of Marx and Engels.  To finish I draw on Shakespeare, “something is rotten in the state of Europe”.

George Hoare – Why the Tories Are Blowing Brexit

The Conservatives are in a mess because they never understood what Brexit really meant. Instead of delivering to the voters who elected them they are finding ways to carry on in essentially the same way […]