Germany, the great hypocrite with regard to fossil fuels, is continuing its tradition of lies and dissimulation, this time under a minister of the Green Party, Robert Habeck. 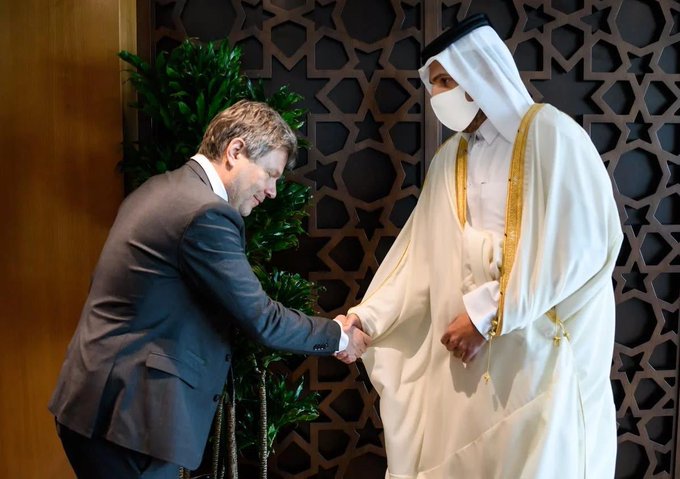 The meeting of the G7 energy and climate ministers in the last week of May took place in Berlin. This year Germany holds the G7 presidency, and so the German Energy Minister Robert Habeck announced the resolutions and declarations of intent at the conclusion of the conference. By far the most important was ending the generation of electricity from fossil fuels by 2035. Coal and gas-fired power generation will then be a thing of the past. Beforehand, Habeck had once again urgently appealed to his colleagues: “Our greatest enemy is the congestion quo. What we are doing is too little” to really implement the Paris resolutions of 2015.

Not for the first time, these are grand words at an international conference. But the national practice is then mostly the opposite. Just one example: in view of the still scandalously high global subsidies for the fossil industry of $5.9 trillion (according to IMF figures from 2020), the conference in Berlin decided to terminate subsidies for fossil energy by 2025. Parallel to the Berlin conference, Germany’ chancellor Olaf Scholz travelled to several African countries including Senegal, where he assured millions of dollars in aid for the development of natural gas production. Energy Minister Habeck wants Germany to build four new LNG terminals in the next 2 years at a cost of over one billion €, although Western Europe could be fully supplied with gas with the existing terminals.

On the sidelines of the Berlin conference Habeck approved extensive fracked gas imports with his colleague Kerry from the USA. As with his visit to Qatar a few weeks ago, however, these agreements have a big catch. The supply contracts run for 20 years; because the business is only profitable for the US corporations for this long time frame; this also applies to the envisaged supply contracts of LNG gas with Qatar.
So until 2045, Germany will be importing massive amounts of gas. This is in stark contrast to Berlin’s announcement to phase out fossil-based power generation by 2035. In the Berlin final declaration, however, the G7 ministers left themselves a loophole in view of the Ukraine war: “Recognising that the promotion of national security and geostrategic interests are of vital importance”, there may be exceptions to the ambitious target.

What madness this is is shown by investigations of the British daily newspaper “Guardian” a week ago: The new planned fracking gas drilling projects in the USA would release a total of 140 billion tonnes of climate gases. That alone is more than a quarter of the remaining global budget for achieving the 1.5 degree target!

Meanwhile the European Union wanted to decide this week on a new full oil embargo against Russia by the end of the year. But the EU’s oil import sanctions against Russia are full of loopholes and remain controversial. The current decisions only affect sea imports for the time being. The important “Druzhba” pipeline from Russia to the Czech Republic, Slovakia and Hungary remains open, partly because Hungary is 100% dependent on it for its imports and has no sea access and no pipeline to Western Europe.

These latest decisions by the EU are such a serious intervention in the global oil market as has not been seen for decades. After all, Russia is a big player and the absence of Russian oil is shaking up the global market. So far, Russia exports about half of its oil to Europe, but China is in the meantime the largest single customer.

This political intervention by the EU in the world market is as so typical completely inept because neither OPEC was brought on board (the OPEC countries refuse to support the Russia sanction), nor were any regulatory measures imposed for major oil companies with their market dominance. The EU has still again overreached itself with this political project. The EU has neither the political, military, nor economic influence to control the world crude oil market in any significant manner. Not even the USA can do that these days.
The sole beneficiaries are the big oil multinationals. The world’s biggest multinationals such as Aramco, Exxon, Chevron and BP have already been making the highest profits in decades as a result of the more than 50% increase in the price of crude oil. In the first quarter of 2022 alone, the Arab oil company Aramco made a profit of $40 billion (!).

Despite these so-called “windfall profits”, the EU does not manage to implement uniform taxation. Here, too, only individual states such as England (25% on windfall profits) or Italy do so. Germany is almost the only country in Western Europe that refuses to levy a windfall tax on oil and gas companies. Germany’s market-radical Liberal party, FDP, which is always a loyal servant of big business, but they are by far the smallest memeber of the coalition and it is all too convenient for the other coailion parties, the Social Democrats and Greens to be able to point their fingers at the FDP. In the end the bill for these insane energy price increases will be paid by the consumers alone and here, of course, the poorer households the most.

Due to the high gas import prices as a result of the sanctions policy against Russia, the price of electricity in Germany has also risen very sharply. For new customers, the price increase last year was 65%. Since in Germany the price on the electricity exchanges is determined by the last power plant needed to meet the demand for electricity and these are usually gas-fired power plants that are switched on at short notice, the electricity price on the most important electricity exchanges in Paris and Leipzig has gone through the roof. The German RWE Group in particular has profited from this. Power generation from hard coal and lignite is now profitable again despite the CO2 levies because, as mentioned, the gas-fired power plants determine the price. Another price driver in Europe has been France in particular for the past six months. This is because almost half of all French nuclear power plants are out of operation or very prone to failure. This is why the French state-owned electricity company EdF has to buy large quantities from Germany, among others, which pushes up the price for all German customers even more.

In their helplessness to get the price increases on the electricity market under control, both the largest opposition party, the conservative CDU, and the smallest coalition partner in the government, the FDP, have recently been propagating the extension of the operating lives of the last three German nuclear power plants. In fact, these power plants are to be finally taken off the grid at the end of 2022. Opposition to this policy has been accompanied in recent weeks by massive media criticism with the old refrain “otherwise the lights will go out in Germany”. Continued operation of the nuclear reactor Isar 2 in Bavaria near the city of Landshut, for example, is not problematic. The head of the power plant, Carsten Müller of the electricity company Preussen-Elektra, pointed out a few days ago that there is a deadline for continuuing the use of the reactor and that was 1 June 2022. In the Bavarian state parliament, Müller explained that for continued operation, new fuel rods would have to be ordered, a comprehensive power plant overhaul initiated and new staff hired by 31.5.22. The same situation exists in the reactor in Neckarwestheim near Stuttgart. The problem is exacerbated by the fact that this reactor has long been criticised by local anti-nuclear activists for cracks in the pipelines, among other things. The time for German nuclear power plants has simply run out, and even the supporters of nuclear power from the ranks of the CDU, FDP and the radical right-wing AFD can no longer change that.

Overall, the current energy policy of the German government is characterised by many announcements and promises on the international stage. At the national level, however, these ambitious climate goals are repeatedly undermined by ill-conceived political measures. Be it through public pressure to bring Russia to its knees, be it through the lobbying influence of the fossil fuel industry or through the conflicts in the governing coalition between the radical neo-liberals of the FDP and the cautious regulatory efforts on the part of the Social Democrats and the Greens. Minister Habeck is the proverbial personification of this completely contradictory policy.

Global leaders will fail to address the climate crisis unless they confront its root cause: an unjust economic system that is killing the planet Laurie Macfarlane is economics editor at openDemocracy, and a research associate […]

Andy Storey – Exit Stage Left? What Scope for Progressive Politics against the EU?

We have become notortious for breaking our own rules, so why stop now? We have already reviewed Costas Lapavitsas´book The Left Case Against the EU (here). It was one of the most popular book reviews […]

E-fuels are a prohibitively expensive and remarkably inefficient way to decarbonize the transportation sector. Stephanie Searle is Programme Lead at ICCT Cross-posted from the ICCT website Most claims about e-fuels are hard to swallow, including […]