Italy is Germany’s favourite enemy. Is it just envy, prejudice, or stupidity that prevents a sensible debate on Italy’s policies and the problems of its European integration?

There is no other question where the German media and German politics are so collectively wrong as with Italy. Whenever the discussion about our southern neighbour flares up, there is a hydra of prejudices that threatens to devour anyone who uses his intellect. Yes, it is no exaggeration to say, as I explained a few months ago in a three-part series (here the first part), that in the case of Italy the Germans obviously have no inhibition in their criticism, while towards France, the “arch-enemy”, the Germans are afraid to show such open national or nationalistic resentments.

In substance, Italy’s situation has not changed much from the situation we described in detail last summer. But the clear victory of the Lega (regularly called “populist” or “nationalist” by the German media) in the European elections and their renewed demands for a relaxation of the rules of the Stability and Growth Pact have once again produced a wave of extremely absurd and really stupid statements in Germany.

The Commission is totally failing
But how can one reproach the naïve journalists if the European Commission with its hundreds of “experts” is not able to see through some simple economic relationships? In its most recent report on Italy, the Commission once again impressively proves that it really has not understood anything that has been discussed for years now and that is being discussed with regard to its overly simple world view.

It seems that, in the case of Italy in particular, that somewhat more reasonable forces in the Commission have been completely silenced. An attempt is being made by brute force to prevent the Lega (and the “populists”) from liberating themselves (in the sense of a fundamental change in the Stability and Growth Pact) that would also serve as a model for other euro nations. Because this is the case, however, it cannot be ruled out that “interested northerners” such as Germany and the Netherlands will put massive pressure on the Commission not to budge a millimetre.

In its report the Commission writes:

“Italy’s potential growth is estimated to have increased in 2018, to 0.5% (up from 0.2% in 2017), but to slow down again to 0.3% in 2019 before picking up to 0.5% in 2020. Overall, it remains very low. As a result, Italy’s negative output gap is estimated by the Commission to have closed in 2018, to -0.1% of potential GDP, from -0.5% in 2017, but to widen again to -0.3% in 2019 due to the starker deceleration in actual GDP growth, before closing again in 2020. Despite progress achieved in some reform areas (e.g. labour market and public administration, fight against tax evasion, banks‘ balance sheet repair), the legacy of the crisis and persistent structural weaknesses keep weighing on Italy’s growth potential. …Italy’s real GDP has hardly recovered to the pre-crisis level, while real GDP in the rest of the euro area is now 21% higher than in 2004. More in detail, Italy’s average annual growth rate was 0.1% over 2004-2018, compared with 1.5% in the euro area excluding Italy.”

That is grandiose nonsense, even by the standards of the economic mainstream. The Commission calculates a “potential growth” that fluctuates from year to year and adapts to the economic situation. In 2019, however, there will be a purely cyclical setback for the whole of Europe, affecting almost all countries and not affecting the potential growth rate in any of these.

There is no production potential and no output gap
But the considerations about an “output gap” are pointless even if they refer to a longer period of time. The concept of the output gap implies that there is something like a potential growth rate dictated by the structural conditions of an economy. The resulting capacities are used to a greater or lesser extent “cyclically”. The output gap is intended to measure whether an economy can still be stimulated by cyclical measures (i.e. demand policy) without real tensions (i.e. overheating) that could trigger inflation.

The concept therefore assumes that an economy cannot really be stimulated by cyclical measures to invest more and thus grow stronger. That is, I am sorry to say, just stupid stuff, a kind of nursery school economics, which does not get any better from the fact that it is presented as an extravaganza and gives itself a scientific coat of paint with long, complicated calculations. There is no separation between the cycle and growth. Exactly the opposite is true, only those who are economically successful during the cycle can also be successful in terms of growth or economic development. A radical revival of investment activity in the economy as a whole, which can only be achieved through a robust economic upswing, increases growth opportunities and capacity utilisation at the same time.

This part of my criticism is shared within the Anglo-Saxon discussion of this topic (as the Financial Times reports). It is downright ridiculous that the Commission calculates an almost identical output gap for Germany and Italy, even though unemployment is much higher in Italy. This is absurd even under mainstream conditions, because one has to take into account that the possible danger of inflation is related to the level of unemployment. This makes an equally high inflation risk in Germany and Italy impossible, especially if one believes in the neoclassical labour market.

Italy in the German trap

Italy – as we have often shown – has been set back by the German policy of wage dumping in the monetary union and has therefore lost world market shares. Now the negative external effects on economic development cannot be compensated internally, because the conditions in the European monetary union force the country’s policy to exert massive pressure on wages in order not to fall even further behind Germany. This has nothing to do with “structure” in the usual sense and the consequences of this can only be offset in the short term by an expansive fiscal policy.

One can save oneself all the questionable exercises with output gaps and growth potentials if one consistently argues on the basis of fiscal balances. In Italy, the fiscal balances (Graph 1) show that there is no longer any market-based way to stimulate the economy. When companies save as much on balance at extremely low interest rates as they do in Italy, all traditional arguments against more government debt, as used and assumed by the Commission, are obsolete. In other words, an argument along the traditional lines of the Maastricht Treaty or the Stability and Growth Pact is useless from the outset, because the necessary conditions for the validity of such an argument simply do not exist. 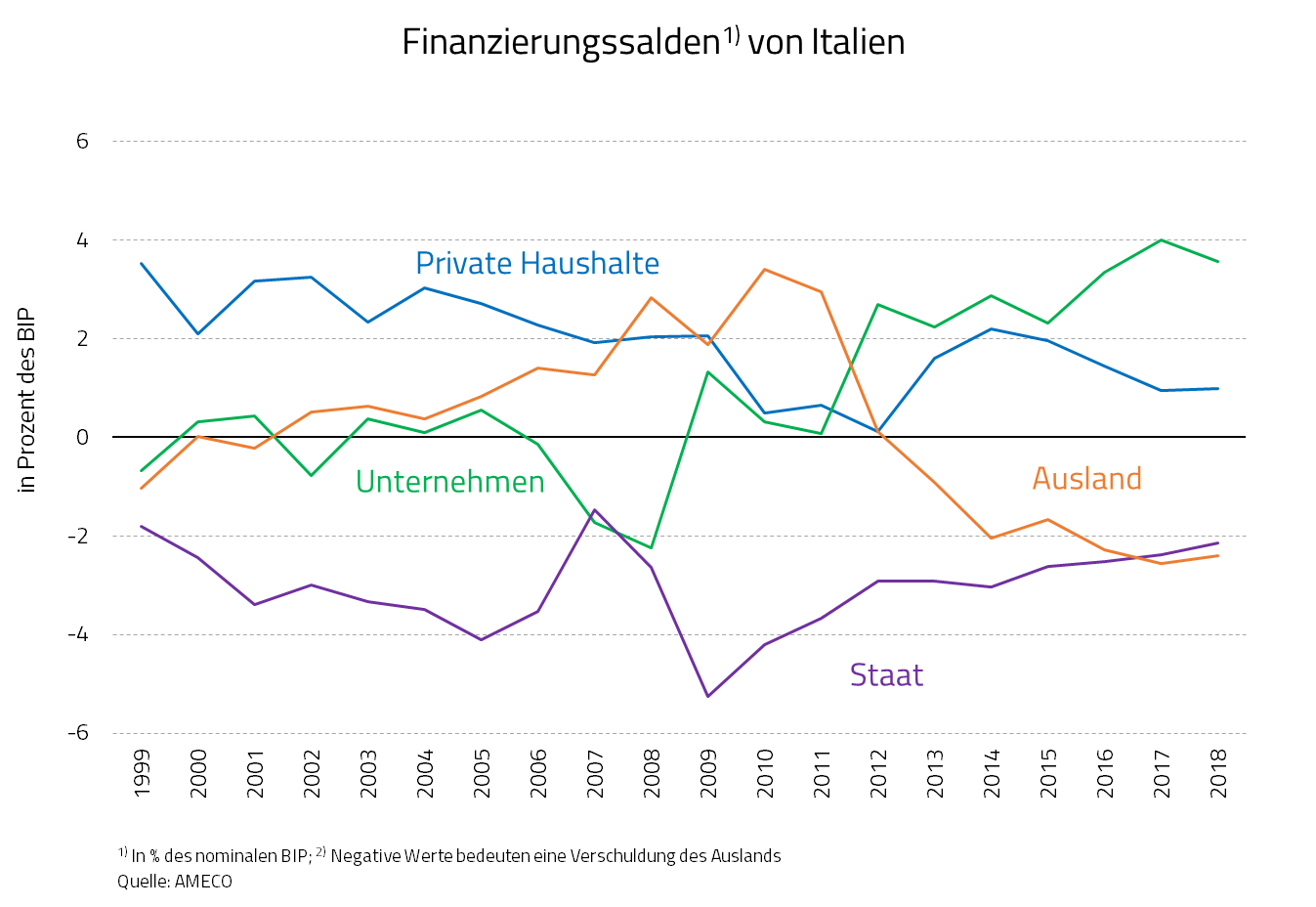 Italy cannot simply increase its current account surplus because in the monetary union this would only be possible with wage cuts in relation to Germany. But that would mean that – as was the case in Greece – domestic demand would collapse and cause damage far greater than what could be gained in foreign trade. Consequently, there is no other way than to ensure, through higher public debt, that demand does not collapse because of household and corporate austerity efforts. The state must close the demand gap in every period, no matter how high its current debt is. “Structural measures” do not change this logic as long as they are not likely to fundamentally change corporate behaviour. But this is not even the aim of structural measures, so there is no need to talk about them at all.

Unfortunately, it must be said that Italian economists, most of whom are mainstream educated, fail completely in their assessment of their own nation’s economy. A consistent macroeconomic analysis only exists in a few small circles, so that whenever Italian politicians make a move in the right direction, they are also massively criticised in their own country. That opens the door again for those who do not like the political policies of the current Italian government and who never want to criticise Europe or a neighbouring northern nation.

Since a similar diagnosis has to be made for France, Europe is paralysed and incapable of freeing itself from the misery that is currently getting worse. Graph 2 shows that investment by companies is less of a problem in France, but that the country has a current account deficit that forces the state to step into the breach. 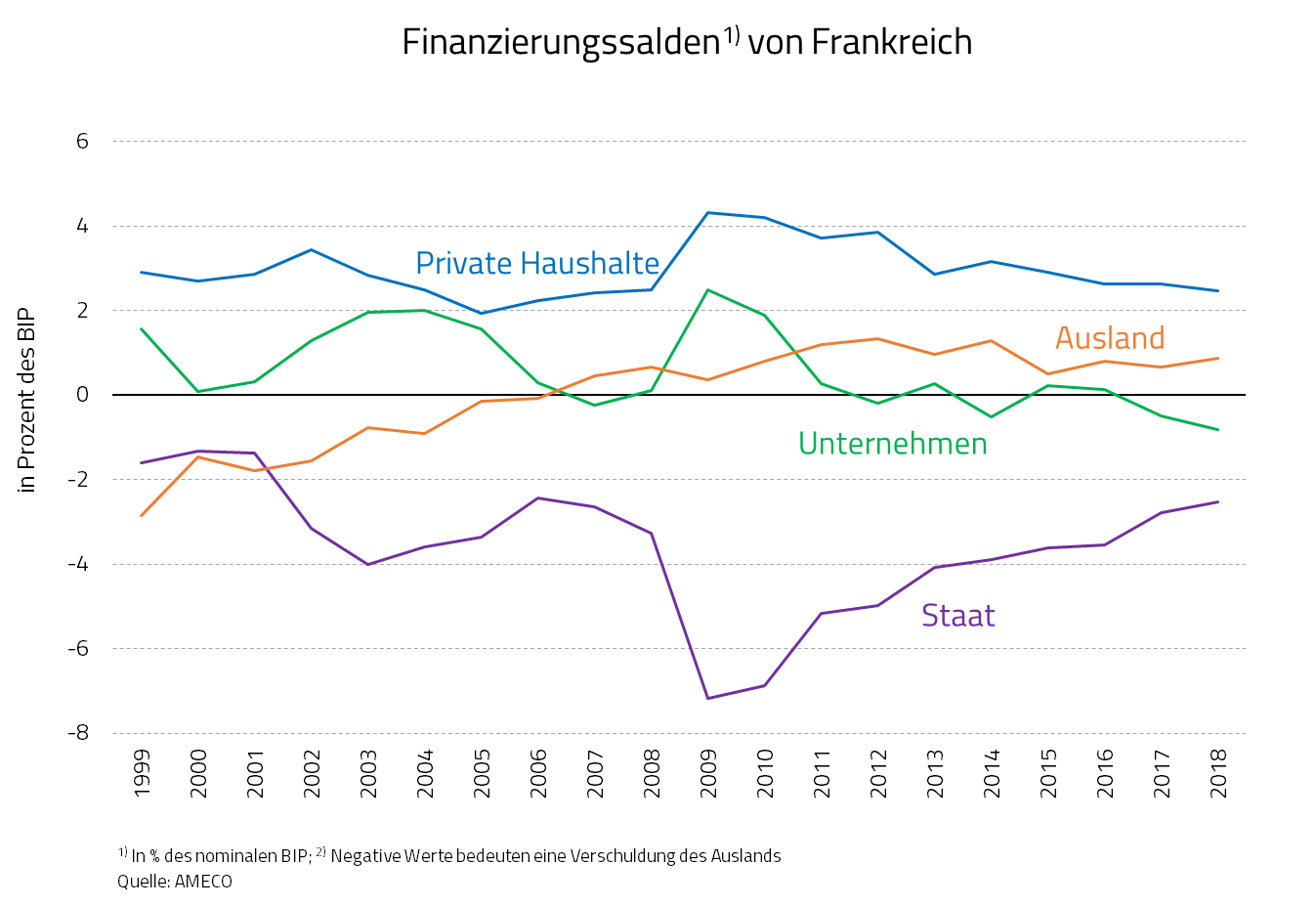 Those who resort to this kind of analysis should never make the mistake of viewing a nation as if it was a completely closed economy and limiting their solutions exclusively to national measures. Even those companies that do not appear in the mainstream analysis simply because it is assumed that they behave in the traditional manner (as debtors and investors) and thus as expected, cannot be overlooked here. Who – like the Commission and the responsible politicians of the “interested countries” – pretends that none of this exists is the true gravedigger of Europe.

David Whyte – Interview with Mireia Vehí, CUP and Member of the Catalan Parliament

The day after the incredible events of the Catalan referendum, and the day before a general strike that has been called to challenge the Spanish state’s violence, Mireia Vehí, Member of the Catalan Parliament, for […]

Ben Wray – Is Dissent Allowed in Keir Starmer’s Labour or The Intercept?

The “Left” has become as integral a part of neo-liberalism as the rest of the liberal-democratic parties. Joe Biden is often referred to as “left” as are social democrats. How far does the Left have […]