After two and a half years of enforced zooming, that is of giving or attending lectures online, I listened today, at UNDP offices in New York, to an excellent book talk, given by Leandro Prados de la Escosura, Professor of Economics and of Economic History at the University Carlos III in Madrid. (The book “Human Development and the Path to Freedom: 1870 to the Present” is here and an article on the same topic is here.)

Prados has just completed a seminal book that extends the Human Development Index (HDI), originally “invented” by Amartya Sen and now for several decades produced by the UN Development Program, in time all the way back to the early 19th century, and in scope. The index, as the aficionados of development know, includes three dimensions  of welfare: income (proxied by the GDP per capita), 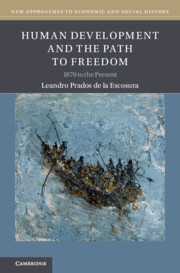 education (number of years of schooling) and health (life expectancy). The HDI has generated a huge literature: does adding up or multiplication of such components make sense, how to introduce inequality in each of the components, should some components be included at all (last Summer, Nuno Palma argued, rather vociferously but not unreasonably, that education should be dropped: it is a means toward achieving income, not a good in itself. I have to admit that I thought so for a long time but was reluctant to enter into that discussion). Leandro Prados’s book is extremely rich and powerful as it charts the evolution in human welfare across countries and regions over two centuries, but it is also provocative because Prados uses a somewhat different metric for the three original components and, importantly, introduces the fourth component or dimension: human freedom. The new Prados’s “augmented” HDI is possibly the most important development since HDI was first defined. (Another candidate for this title is taking into account the inequality with which the three components are distributed, done some 15 years ago.)

It is the proposed inclusion of the political component that I wish to discuss here. Prados’s view is well-grounded in the theory of “development as freedom” popularized by Sen. Political rights are seen as inseparable part of human freedom because they give individuals agency to exercise their choices in general, and even their choice over the three key dimensions in particular (perhaps that people would prefer better health to higher income). The fourth, political, components consists, as Prados explains, of two parts: negative freedoms (that is, absence of coercion and control over one’s ability to express opinions and participate in public life) and the way that such freedoms are politically “bundled”, namely existence of democracy and of political checks and balances.

Now, the agency or voice part of the political variable can be associated with “development as freedom”; the “democracy” part is, in my opinion, much more problematic. Increasing individual’s agency, provided that it does not limit the agency of others, is indeed an improvement in one’s condition, the same as greater longevity. Being able to access information, to express one’s opinions, to participate in political life are valuable in themselves. The exercise of individual agency must not come at the expense of others exercising the same agency. This is of course the well-known rule that our freedom is limited only by the same freedom for others. Agency therefore already includes a notion of equality. A country where 90% of the population have full agency and voice, but 10% are slaves is abhorrent even if a statistic of 0.9 may not be too different from that of an alternative country where everybody has one-tenth of their maximum freedoms abrogated. This implicit egalitarian bias in agency is something that I would leave at this point, but that can be developed further.

Another argument in favor of introducing agency is to check empirically if it tends to be associated with increases in other dimensions of human welfare. It seems so at first. But it is also possible that more agency, more freedom to voice opinions leads to political polarization, even to anarchy, and then to lower income growth and higher mortality. Whether one or other direction is more likely is something that we should discover empirically and this is why adding agency/voice is, in my opinion, very useful.

My concern is with the inclusion of a particular way to aggregate the opinions of the public: democracy. Democracy is just one way of such aggregation of preferences: other ways are not only possible but have existed, and continue to exist. Preferences can be aggregated through corporatist or representative bodies; a single party system via intra-party debate; by consultative monarchy; oligarchic or elite rule with popular consultation, by theocracy etc. The best way to rule a society is a topic old, in the West, at least 4,500 years. Plato, who was among the first to think about it, was not a great friend of the specifically democratic way of rule. We are very unlikely to ever agree on the best way to rule, and the introduction of liberal democracy as implicitly the ideal toward which humankind strives, brings a very specific political view of the world into an index that at least in its other components is free from excessive politicization. (I do not mean here only the direct politicization that such a component would bring into an international organization, composed of governments whose legitimacies are widely different–this is obvious—but even the politicization that it would introduce among the academic practitioners or users of the new augmented HDI.)

While agency proper can be, however imperfectly, measured, democracy cannot. Regarding the former, one could look at countries that allow full access to sources of information, those that do not, and others in-between. One could also look at the freedom to express one’s opinion: how many people are fined or jailed for that? Finally, one could look at the freedom to participate in protests and marches and petitions. While agency may never  be measured as well as the other three components of the HDI, it is susceptible of at least imperfect measurement.

This is not the case with democracy. As I mentioned, it is just a particular way to “bundle” people’s preferences; its measurement intrinsically depends on our subjective estimates. This is obvious from almost all currently existing indexes of democracy: what are the checks on the executive power cannot be adequately reduced to a number, nor can inequality in real political power be readily measured. How do we account for the fact that the rich “buy” policies they like by supporting electoral campaigns of these who would do their bidding? How do we account for the creation of “the correct” opinion by the media owned by the rich? All of these, immeasurable, factors often decisively influence the translation of preferences into actionable policies, and yet they are difficult or impossible to measure.

What are the conclusions? First, I think that the introduction of agency proper in the HDI should be applauded. It is clear what it means, it is measurable, and it is a good in itself. Second, the introduction of democracy as currently defined would represent the introduction of one particular way of political process which is both geographically and historically limited. This is a conceptual reason for leaving it out. But in addition (my third point), it is impossible to measure “democracy”: even if we could agree on what it is, and even more, if we could agree that it should be introduced into the HDI, it will remain measured by subjective “expert opinions”, it will remain heavily politicized, and hence it would never reach the acceptability of measures such as health or income outcomes.

Some food for thought on the weekend. Branko Milanović is an economist specialised in development and inequality. His newest  book is “Capitalism, Alone: The Future of the System That Rules the World” Cross-posted from Branko’s […]

What occurs when government breaks down? Branko Milanović is an economist specialised in development and inequality. His newest  book is “Capitalism, Alone: The Future of the System That Rules the World” Cross-posted from Branko’s blog […]