In Catalonia human rights are still being trampled by the Spanish government – but it is in the EU, so that is OK.

Ignasi Bernat and David Whyte are editors of Building a New Catalonia, a new book exploring the anti-capitalist, feminist and socialist dimensions of the Catalan independence movement. 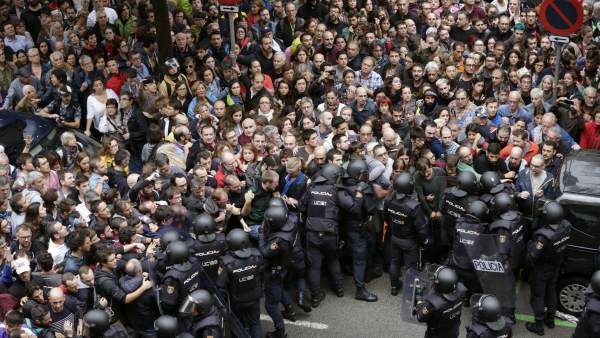 On Monday morning nine pro-independence activists in Catalonia were arrested in a swoop by the Spanish Guardia Civil.  They are charged with ‘rebellion’ and ‘sedition’, the same offenses that the 12 Catalan political prisoners are currently accused of.

The operation was conducted under the instruction of the Audiencia Nacional, the Spanish central court that deals with ‘offences against the Crown’ and ‘terrorism’. Two have now been released, but seven remain in custody in Madrid where they will be held incommunicado and brought before judges this week.

The Guardia Civil have said openly that the arrests targeted local groups working under the name Committees for the Defence of the Republic. Those groups came directly from the non-violent grassroots community organisation that was established to organise the referendum on the 1st October 2017 and since then has focused its protests on the political prisoners.  It looks very much like this police operation has been timed as a prelude to the verdicts of the 12 political prisoners who face sentences of up to 24 years for their involvement in the 2017 referendum.  A statement from the Catalan government asserted, “Repression remains the only answer from the Spanish state. They are trying to build again a narrative of violence before the rulings.  Those verdicts are due in the next few weeks.”

The arrests have allowed the Spanish state to heighten political tensions and to raise speculation around a threat of Catalan ‘terrorism’.  At the same time as the arrests, the Guardia Civil raided a warehouse storing fireworks that were used for the fiesta in Sabadell last week, and announced that they had been investigating “explosive material.”  They then announced seized documents, computers and materials that could be used to make explosive devices.  Yet the groups involved have been involved in non-violent protest.

Supporters of the accused argued that this was a bizarre strategy that sought to frame the activists and pointed out that the fabrication of evidence is a tactic that the Spanish state has used regularly to send a message to opponents of the government and neutralise protests against the sentences of the political prisoners. Last year, charges against two pro—independence activists Tamara Carrasco and Adrià Carrasco were later reduced to public disorder.  A whole succession of trumped up charges against pro-independence activists, including the bizarre accusation of “hate crimes against the police” have been heard in court and then dropped later.  This is how the courts are used in Spain now: to intimidate and to provoke fear and suspicion.

The prelude to the verdict on the political prisoners in Catalonia has been characterised by a rule of law based on hearsay and conjecture.  Last week, 47 lawyers, doctors, psychologists and left political activists from the Basque Country were forced into a plea bargain that saw twenty year sentences for terrorism reduced to two years in the Audiencia Nacional, the same court that ordered the arrests of the Catalan activists.  They had been accused of membership of Eta, yet all of the activities they were accused of came after the ceasefire of 2011. Some of the convicted were lawyers who had been arrested while defending their clients in court.

It is not surprising that they were forced into a plea bargain.  The Audiencia Nacional has a dubious reputation in Spain for it highly politicised judgments. This is the court responsible for initiating the prosecution of the Catalan political prisoners before their cases were passed to the Supreme Court for trial.  In the sense that it is designed to represent the political establishment, the court inherited the mantle of Franco’s notorious Public Order Tribunal. The court explicitly deals with issues of conflict deemed to be ‘political’.  The Audiencia Nacional has been condemned frequently in the European Court of Human Rights for a string of wrongful imprisonment cases and miscarriages of justice. It has, for example, convicted a group of activists who burned pictures of the Spanish king; and notoriously it was responsible for the false conviction of eleven Pakistani men who spent six years in prison for terrorism before they were finally released.  The court sanctioned four police operations against anarchist groups between 2014 and 2015 with more than sixty people arrested accused of terrorism.  Those cases ended with no convictions.

The lawyer Benet Salellas who is the lawyer acting for Jordi Cuixart, one of the Catalan political prisoners, told us, “We continue to defend the presumed innocence of the nine arrested because we believe that the central judicial institutions do not act with neutrality and objectivity, but are acting for  the interests of a political project and discourse”

Monday’s arrests have all the hallmarks of a miscarriage of justice, created to shape public opinion in the prelude to the impending verdict on the trial of the Catalan political prisoners.  It represents a profound attack on democracy and the right to protest.   Civil liberties campaigners and human rights lawyers are questioning how Spain can be held accountable for a level of political repression that is escalating as the European Union and its member governments watch in silence?

Richard Murphy and the Tax Justice Network have been major actors in bringing about this development Richard Murphy is a Visiting Professor of Practice in International Political Economy, City University of London. He campaigns on […]