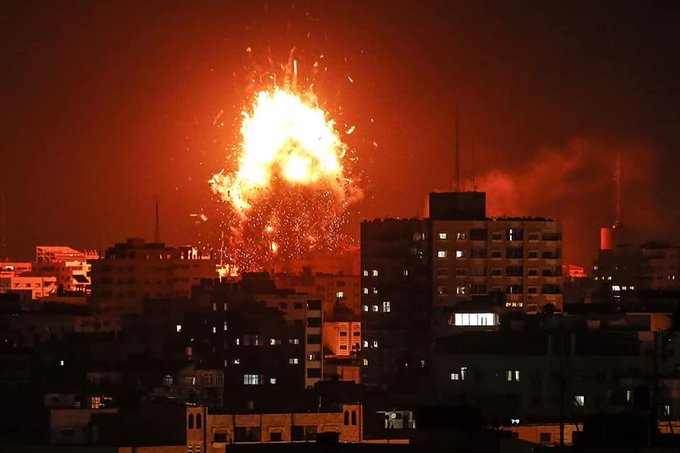 “THE FIGHTING ERUPTED on Monday after weeks of rising Israeli-Palestinian tension in East Jerusalem which culminated in clashes at a holy site revered by Muslims and Jews,” reported the BBC. A standard sentence, neutral, seemingly written to offend as few as possible. Yet also a sentence conforming exactly to what Branko Marcetic calls the “traditional way of reporting” the Israel-Palestine conflict:

That way involves boiling systemic injustice down to nondescript ‘rising tensions,’ describing state violence and resistance to it as nebulous ‘clashes,’ subtly presenting Israeli and Palestinian violence as roughly equivalent in scale and moral propriety, and generally making it impossible for casual consumers of news to do anything but throw their hands up in frustration and ask: ‘When will they learn to live together in peace?’

Questions of agency largely vanish. A succession of violent police raids on holy sites during Ramadan become “tensions”. A military battle that pitches stone-aged technology against super-advanced weaponry becomes “clashes”. Naturally no deaths and no atrocities should be celebrated, but the fact that 67 people have died in Gaza compared to six in Israel, a ratio of eleven to one, is listed as a bland aside.

Reporting of the Middle East has always been a study in the art of euphemism as propaganda. So perhaps it’s little wonder that people have a jaundiced idea of what’s at stake. It doesn’t help that anyone who has shown the courage to defend the Palestinian national cause, such as Jeremy Corbyn and Ken Loach, has been effectively expunged from mainstream politics.

Of course, while the reality of this on the ground is occupation, apartheid (the term used by mainstream and Israeli human rights groups) and vastly disproportionate casualties, it remains a sensitive topic. Israel’s atrocities have been grist for the mill of anti-Semites. That’s been a gift for those who want to defend the indefensible. Leftists themselves struggle to find the appropriate terms for criticising Israeli policy. Very often they are forced to resort to euphemisms and platitudes themselves.

I’ve heard it said that people should criticise the individual acts of Israeli governments without questioning the state’s existence. After all, they argue, the United States and the United Kingdom are also founded on genocide and systemic violence: does anyone question their legitimacy?

The problem is, the answer is yes, people do question the founding of the UK and the US. Indeed, our own state form is actively imperilled, hence we are openly discussing the “breakup of Britain”, partly as a consequence of post-colonial decline. In that context, the blandest of liberals are publicly slaughtering the sacred cows of the British state, ranging from Winston Churchill and Oliver Cromwell to William Wilberforce, William Gladstone and the Duke of Wellington.

America doesn’t face quite the same crisis. But it’s still a nation divided by questions surrounding the state’s foundations. Even the most milquetoast American liberals are now talking about “settler colonialism”, white privilege and the illegitimacy of a state founded on the genocide of the native population. Such topics are rampaging across America’s non-fiction bestseller lists. Books on these topics are considered mandatory for readers of Cosmopolitan and Vogue. In other words, everyone in the liberal class is questioning the founding legitimacy of the American state.

Yet it’s much less fashionable to question the $3 billion or so in American military aid that funds settler colonialism today. In British politics, likewise, you can be actively banished for raising these questions.

So really the hypocrisy should be inverted. It’s actually become rather chic to question the sinful foundations of your own state, albeit in the most empty, performative, privilege-checking manner. Yet it’s harder than ever to question our foreign policy insofar as it involves ongoing complicity in systemic brutality and ethnic cleansing. The former can get you a column in the Guardian; the latter still takes real moral courage.

The disputed land of Israel-Palestine needs to be a safe haven for Jewish people worldwide. Nobody questions that. But that shouldn’t mean denying the right of return to Palestinian refugees, one of the world’s biggest and most marginalised groups. It’s fine and dandy to criticise Netanyahu as one of the world’s “baddies”. However, a true understanding of this conflict (and any other) demands that you question the violent foundations of state power, and thus address the Palestinian nakba.

Europeans are unhappy with uncomfortable temperatures in mid-June, while in some parts of the world unbearable heat is bringing drought and starvation Cross-posted from CounterPunch The canary in the coal mine is dead. He died […]

A short but thoughtful piece Patrick Cockburn is the author of War in the Age of Trump (Verso) Cross-posted from Counterpunch Photograph Source: David Shankbone – CC BY 2.0   Some of the most sensible commentary […]

Dean Baker – The Opera Singer and the Sanctions