»There is nothing more political than money.«

This simple sentence is the very quintessence of the book. Fanny Pigeaud and Ndongo Samba Sylla explain the history, the functioning, and the consequences of the last remaining colonial currency: the CFA Franc. Africa’s Last Colonial Currency. The CFA Franc Story allows us – Africans and Europeans – to understand the immense importance of the CFA Franc for the democratic debates of our time. 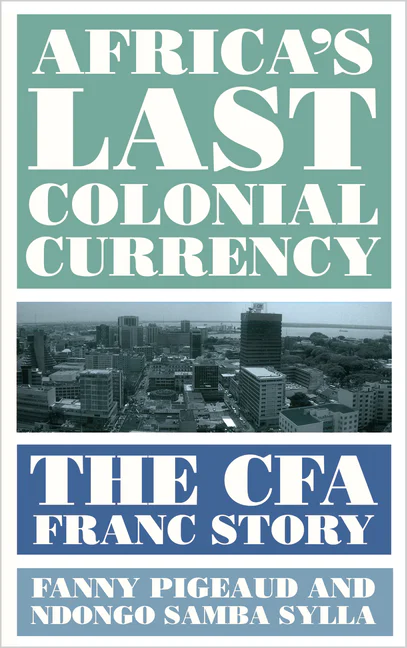 Sylla and Pigeaud begin with a historical recapitulation. Like any other colonial power in the nineteenth and twentieth centuries, France was eager to establish – or impose – its own currency in the conquered territories of Africa in order to drive the colonies into political and economic dependence. And, as the book demonstrates, France is trying to maintain its economic and political influence down to the present day – even though African countries have reclaimed their official independence.

Before the Franc was introduced, some African areas used their own currencies – such as the cowry, which was widely used in West Africa – and some areas were still not monetized. At the end of the 19th century France began to create local markets in their colonies where the only legal currency was the Franc – they also prohibitted the use of other currencies like the manilla in the ivory coast. In 1907, the colonial authorities forbade the payment of colonial taxes in cowries. Clearly, colonial taxes were an instrument of oppression and helped the French establish their currency in the colonies – which, however, didn’t succeed overnight but took more than 50 years.

In 1936, France abandoned the gold standard, which had been revived in the 1920s, and established a Franc-Zone based on the British model, which included Metropolitan France and all its colonies. Free trade was only possible within the franc zone, while protectionist measures were applied to the outside world. This meant: exchange rate policy and the approval of imports for the entire Franc-Zone were henceforth decided by Paris. Due to the massive devaluation of the franc after the Second World War, De Gaulle issued a decree on 25th of December in 1945 to reorganize the monetary situation in France and the colonies. The CFA Franc was born. However, the introduction of the CFA franc was by no means out of pure magnanimity, but rather to strengthen France’s own influence in these territories after the USA and the Soviet Union urged France to loosen its grip on its colonies following the Second World War.

The CFA Franc was established with a fixed exchange rate to the Franc and was designed to be overvalued from the very beginning. This was a major problem for the African colonies, the AOF (Afrique-Occidentale française) and AEF (Afrique-Équatoriale française), but clearly to the advantage of metropolitan France. Due to the overvaluation of the CFA Franc, imports from metropolitan France became comparatively cheap, so the colonies increased their imports from France, which helped the economy of metropolitan France. On the flipside, the overvaluation increased the prices of their colonial export products relative to those from their international competitors. As it became harder to sell products to international markets, exporters turned to metropolitan France, which paid with their own currency. Since the CFA Franc was fixed to the Franc (and later to the Euro), the CFA countries need to get a hand on Francs (later Euros) in order to be able to deliver on the promise to exchange CFA Francs to Francs (now Euros) at a given rate. Selling exports to metropolitan France and getting paid in Franc, was one way to achieve that. Obviously, the creation of the CFA franc forced the colonies into economic dependence on France, which had a very weak economy at that time, hence benefited a lot from both higher exports to and cheap imports from the colonies.

Sylla and Pigeaud suggest that some African deputies criticised the CFA Franc, which brought them nothing but obligations to France. The creation of the CFA Franc only meant a higher standard of living and a safe and cheap source of raw materials for France – at the expense of the colonies. To the present day, France imports raw materials like uranium and oil from the CFA nations at very low costs. This harsh criticism led France to make a few cosmetic corrections – but nothing changed in the basic system and dependency. At the end of the 1950s, due to growing global pressure for decolonisation, France began to develop strategies to grant formal independence to its colonies without having to relinquish its economic and political influence over these territories. In a “community” that was to recognise the previous colonies as sovereigns, France wanted to continue to secure the necessary political and economic influence. In the course of this, France urged the states of its former colonies to sign various treaties that were intended to ensure that France’s influence on economic policy, the currency and in other areas remained unbroken. Sylla and Pigeaud underline the absurdity of these treaties, which were undeniably at the expense of the African states, with a revealing quote from Jean Foyer, at that time Secretary of State for Relations with the States of the Community. He said: “France has the right to say that its colonisation [sic] has been a success. […] In economic terms, they [the treaties] guarantee preferential markets for our products. They allow us to pay in francs for purchases [from these countries].”.

Making use of the economic framework of Modern Monetary Theory – or MMT – , Pigeaud and Sylla point out how the CFA system works. Strictly speaking, the CFA franc consists of two currencies: the Central African CFA Franc (BEAC) and the West African CFA Franc (BCEAO). However, the two currencies are not convertible with each other. They state that the CFA system is based on four principles. First of all: The CFA Franc was pegged to the Franc at a fixed exchange-rate and has since been pegged to the Euro at a fixed exchange rate. Secondly: There is free movement of capital between France and the CFA zone. Thirdly: it is guaranteed that the CFA can be converted at the fixed exchange rate into Franc / Euro. Fourthly: The CFA countries have to hold half of their foreign currency reserves with the French Ministry of Finance – and the interest paid on the currency reserves is usually low, often even negative.

The construct of the CFA franc still brings France and the Eurozone huge economic advantages. No foreign currency reserves are needed to finance imports from the CFA-Zone. The free movement of capital also makes it easy to transfer profits from the CFA-Zone to France. On top, Sylla and Pigeaud point out that the construct also comes with political advantages. In 2010, the Ivory Coast found itself in a very unique situation. After the presidential election, the country had two presidents: the outgoing president Gbagbo, which had been recognised as the winner by the Ivorian Constitutional Council and Ouattara who was considered the winner by the international community. France had a clear favourite in these elections: Ouattara. For this reason, France made use of the CFA Franc system to put economic and political pressure on Gbagbo, urging him to resign. For example, they ordered all French banks in Ivory Coast to cease operations completely. Together with the BCEAO, the West African Central Bank, they eventually brought the country’s payments and foreign exchange to a complete standstill. Apparently, this economic form of repression turned out to be very effective. Justin Koné Katinan, former Ivorian budget-minister, later said that »a single official in France can block an entire country.«

With their book, Pigeaud and Sylla make an immensely important contribution. They reconstruct the historical development from colonial times to the present, elaborate on the problems arising from this system and elaborate on progressive alternative. As the book points out, the CFA Franc is a means of economic and political repression that deprives countries of their sovereignty. Reclaiming sovereignty requires reclaiming the currency. Fanny Pigeaud and Ndongo Samba Sylla are right: “There is nothing more political than money”.

Maurice Höfgen is an economist and book author (“Mythos Geldknappheit”), working as a research assistant for economic policy in the German Parliament. For more information: www.mauricehoefgen.com

Book review by Mathew D. Rose In 2011 Guy Standing wrote a book titled “The Precariat – The New Dangerous Class”, which showed great prescience. By the second paragraph he had already predicted what would […]