Shireff has taken a long look at what has become of the much heralded banking reforms in the aftermath of the recent financial crisis and found them indigent. 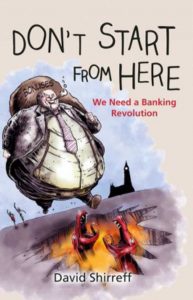 “To inspire confidence, banks have tended to be housed in prestigious buildings. That has come to obfuscate their basic function and has given bankers an exaggerated sense of their own importance. Victorian sewage works and pumping stations were also housed in prestigious buildings, but there was no illusion about the stuff they were pumping. When it comes to banks, there is.”

In his book “Don’t Start From Here” with the subtitle “We Need A Banking Revolution” David Shirreff, a recently retired journalist of The Economist, has taken a long look at what has become of the much heralded banking reforms in the aftermath of the recent financial crisis and found them indigent. In his seventy page monograph – in this case less can truly be more – Shirreff analyses the promised reforms that have gone lost along the way and explains their exigency in a coherent and enjoyable read.

Having covered banks for years for The Economist Shirreff starts out reflecting upon the original purpose of these financial institutions and the massive financial and political power they have usurped in the current millennium. He goes forward systematically and unassumingly starting with the question of what banks do, or better said, should be doing.

Shirreff then leaps directly into the fray, citing the two “glaring failures” of banking reform since 2008: The failure to simplify the complexity (breaking banks up into smaller units) and the failure to change the culture that permeates the world of finance (the termination of a culture of entitlement by bankers), whereupon he proffers ten remedies. This is root and branch stuff, ranging from “Simplifying the rules” and “Scrapping Basel 2 and 3” to “At least consider a financial transaction tax”. Shirreff has nothing against banks and speculation. He simply argues for a simplified regulation of the former, while the latter should be extruded into the non-regulated financial sector. There the casino world of finance can continue its existence, isolated from the taxpayer and small savers. Shirreff then goes on for a second round of bank reform recommendations, this time specifically for his native Britain.

Part 2 of the book is dedicated to the question of what went wrong – and still is: the tragic journey from Gramm-Leach-Bliley Act to the present. Shirreff dedicates a good part of this chapter to the European financial system. For readers in the United States surely an excellent insight into the financial crisis with regards to European banks, which might also be edifying for many Europeans, who think this has been all about US financial institutions.

Shirreff calls for “a revolution to reduce complexity in global banks, to split them into manageable chunks, and to change the self-serving nature of the culture that dominates them”. To popularize this Shirreff had admirably taken the complexity out of the subject matter, including a perspicuous glossary for the laymen. The book includes light-hearted topical cartoons by jack Coltman. Shirreff may not achieve the revolution he wishes for, but he certainly will get us once again focused upon necessary reforms to achieve sensible, if not existentially vital, financial regulation.

Book Review by Chris Bambery Not so long ago if you heard Italian spoken in the UK you could be reasonably sure that it would be by tourists. In my native Scotland famous Italian Scots […]

Will big business destroy our planet? By Peter Dauvergne