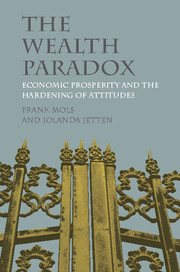 Since the UK referendum on membership of the European Union and the election of Donald Trump as US president, a seemingly inevitable narrative has taken hold in the media and public conversation. Blue-collar workers in the former industrial heartlands of the UK and the US have seen their wages undercut by globalisation and the consequent abundance of cheap labour. It is logical therefore that these “left behind” communities have developed xenophobic attitudes towards the foreign workers coming in to “take their jobs”. As one Spectator headline put it, “Brexit voters are not thick, not racist: just poor”.

Yet as exit-poll analysis indicated, there was also significant support for Brexit and Trump among high earners. In fact, as Frank Mols and Jolanda Jetten suggest in The Wealth Paradox, the notion that it is only the poor who “lash out” at immigrants and minorities is a myth. Rich people can be racist too; and although parties such as the UK Independence Party and Greece’s Golden Dawn gained popular support in the wake of the global financial crisis of 2008-09, xenophobia can also flourish at times of economic security. Contrary to the standard assumption that the Depression of the 1930s led inevitably to the rise of Hitler, support for the Nazi Party was as high in affluent Protestant rural communities as it was among the working class.

The explanation for this apparent “wealth paradox”, the authors argue, is that prosperity does not necessarily lead to contentment and, in turn, generosity: even the well-off can feel envious and insecure, regarding “outsiders” as rivals or threats.

The psychological experiments that comprise the empirical core of this book – illustrating the importance of relative rather than absolute wealth, and the impact of newcomers on these subjective perceptions – are no doubt significant within the authors’ disciplines of political science and social psychology. They will be less surprising to the general reader, familiar with the notion of status anxiety and “keeping up with the Joneses”.

The real value of The Wealth Paradox lies in its potential to undermine the pernicious and widely held assumption that right-wing populist leaders are the legitimate representatives of “ordinary working-class people” because they give voice to intrinsic feelings of fear and rage about the effects of immigration. Originally from the Netherlands, Mols and Jetten are now based in Australia – two countries with more than their share of “debates” about migrants and multiculturalism. Politicians and commentators sometimes imply that to condemn hostility towards immigrants is to traduce the disadvantaged in particular. Mols and Jetten counter this by pointing out that the disadvantaged are not uniquely prone to such hostility.

They are on trickier ground when they challenge the Marxist association between deprivation, grievance and rebellion, questioning whether the protests that led to the Peterloo Massacre and the Luddite uprisings were genuinely working-class revolts. Here the spotlight is shifted away from the prejudices of the prosperous and towards an apparent attempt to downplay all responses by the dispossessed to their plight – whether they are reactionary or revolutionary.

If economic crisis is not necessarily responsible for xenophobia and demagoguery – both now and at iconic moments such as the 1930s – then what is? The answers lie, as the authors acknowledge, beyond the remit of their study: in drivers such as inequality, media stereotypes and the corrosive ideology of capitalist competition and bootstrap aspiration.

Notwithstanding these constraints and a rather technical style, this book deserves an audience beyond academia: this is myth-busting at its most politically useful.

The Jakarta Method by Vincent Bevins

Shireff has taken a long look at what has become of the much heralded banking reforms in the aftermath of the recent financial crisis and found them indigent. Don’t Start From Here “To inspire confidence, […]