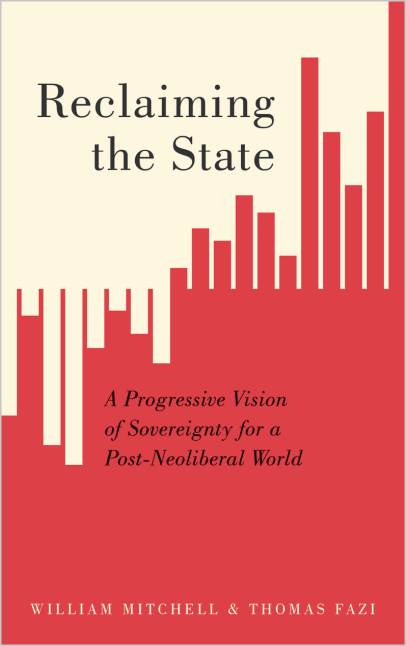 According to Bill Mitchell the book’s original title was “Reclaiming the Nation State”. The progressive publisher wanted the word nation removed. The term “Nation State”, claimed the publisher, was not a progressive term. Obviously it was too close to the politics of the right.

Nothing illustrates better the difficulties facing progressive efforts to challenge neo-liberalism and globalism. This has been abandoned to the right – and they are having great success with it, while the social democrats, with the exception of Britain’s Labour Party leader Jeremy Corbyn, have been virtually wiped out in Europe. The left has been duped into adopting fake economics and is furthermore being manipulated by a false moral code created by neo-liberalism espousing the egalitarian forces of a free market and globalisation. Oxfam reported a short while ago that the eight richest men possess as much wealth as the poorest half of the world’s population. In Europe inequality is rapidly increasing to record levels in modern history. Where is this egalitarian force? What is so positive about neo-liberalism and globalism that the left are supporting both?

This is the question that Bill Mitchell and Thomas Fazi address in their book, which focusses on Europe. It has two parts. The first, “The Great Transformation Redux: From Keynesianism to Neoliberalism – and Beyond” is the analytical portion, tracing how the European left became neo-liberal acolytes. The second part, “A Progressive Strategy for the Twenty-First Century”, explains how the European left – at least what still exists of it – can extricate itself from its past errors. This section goes beyond the scandals and shocking facts typical of so many books concerning neo-liberalism, in that it proposes in-depth solutions to reverse the political and economic process of the past four decades.

One might expect, after all the books, chapters, and articles written about the rise of neo-liberalism, that the first part of this book would simply be a repetition of much that has gone before it. The authors do analyse the historical path of neo-liberalism leading to the current devastating consequences for prosperity and humanity, but they concentrate on the role of sovereign states in the West. They trace how after the war Western governments tamed and harnessed capitalism using its ability to regulate its employment, economy, and finances and thus advanced general well-being among their citizens. The sovereign state also provided a social safety net for its people.

To alter this did not mean stripping the state of power, as is often claimed by politicians and critics of neo-liberalism, but it meant reconfiguring the state, as it still had an important role to play. This could only be accomplished by taking control of the state – which was tantamount to state capture. The neo-liberal offensive also needed a financial ideology, which was delivered by monetarism – and an economic dogma, “fake knowledge”, propagated by neo-classical economists.

The authors examine this process in Europe, especially the EU and its member states, by identifying and explaining key moments when the European left bought in to neo-liberalism. The seminal nation was Britain. Although the authors identify the second Wilson (Labour) government’s conviction, that stable inflation optimised growth, as a watershed, the true turning point is identified as 1976. This was when the Labour government of James Callaghan and his Chancellor Denis Healey terminated Keynesianism in Britain. The destruction work had been done. Margaret Thatcher merely needed to install the neo-liberal regimen. There follows a similar analysis concerning France, in which they recount how President Francois Mitterrand, a Socialist, killed off Keynesianism in France, and Jacques Delors, another French Socialist, went on to pave the way for the single currency, withdrawing financial self-determination from the national governments involved while pushing through  capital liberalisation in the EU.

Whereas the EU states had given up certain sovereign powers, such as financial policy and control, especially those nations in the euro zone, they were in no way enfeebled. They used their authority to support and spread neo-liberal policies domestically and internationally, their principal project being globalisation. All of this was supported by academics and think-tanks, claiming the nation state was becoming irrelevant because of globalisation, and that these states had no alternative to fostering the interests of capital to ensure their own nations’ prosperity.

This led to the development on one of the most important tools used by politicians to hide their neo-liberal agenda: what the authors term “depoliticisation”. It means reducing national sovereignty and democracy, giving this power to non-democratic multilateral organisations and institutions, then claiming to be unable to challenge the rules and treaties of the same international bodies they had created. Europe is now, say the authors, dominated by “a powerful neo-liberal state form insulated from popular democracy accountability”.

Domestically these same governments blame unpopular neo-liberal policy on the same institutions that they created and control, pleading political impotence because of international laws and treaties. Thus the EU is in such a hurry to implement “international trade-agreements”, such as TTIP, which have little to do with trade, but legally further cement the dominance of international corporations over national governments.

The second part of the book maps out a progressive vision of (national) sovereignty, in contrast to the reactionary concept of the right. What both have in common is that they are an expression of citizens demanding the return of their democratic rights – call it taking back control, the empowerment of the people, or re-democratising the EU.

The first solution offered is Modern Monetary Theory (MMT), a body of work – some call it a school of thought – of which Bill Mitchell is one of the world’s primary proponents. In MMT all government spending is funded by money created by central banks on the government’s behalf. Governments spend to guarantee the well-being of its citizens. Taxes are not the basis of government finance, but a tool to stabilise the economy. The capacity to tax, and indeed to borrow, does not constrain government spending. In this system a fiscal deficit is neither good nor bad, but simply financial policy. The primary goal of a national government is not excessive pay and profits for international corporations, but the welfare of its citizens, which includes the environment.

Another chapter criticises Universal Basic Income (UBI), since, in the opinion of the authors, it does not address the promise of a truly democratic society: full employment and providing a living wage. UBI does not solve poor socio-economic results, high youth unemployment, stagnant wages, low GDP, or inequality, but proposes a solution at a very low level, yet in the interests of international finance and corporations. Long-term unemployment used to be measured as three months, now it is one year, and in Europe there are proposals to increase it to two years. With UBI, endless unemployment will become acceptable. A job guarantee, made possible by MMT, allows governments to buy up all excess labour. To their credit, the authors do not skirt the issue of coercion to work.

The answer to neo-liberalism offered by the authors is to restore the power of nation state and its democratic commitments. This entails rolling back the policies of the past four decades to reach a status where the nation state is once again sovereign, but correcting the mistakes in the Keynesian system that made neo-liberalism possible in the first place. What the authors do not address is the fact that international corporations and finance, as well as the 1% of the world’s population they serve, are not going to accept this lying down. As we know from Greece and many third world countries, they can bring a lot of power to bear. Still, there is no other option for the left than to take up the challenge, because as the authors warn, if the alternative to neo-liberalism “offered to electorates is one between reactionary nationalism and progressive globalism – then the left has already lost the battle.”

Bill Mitchell: Central bankers have created excessive unemployment for decades because they use the wrong theory