The Equal Pay Act, the 8-hour day, the two-day weekend, parental leave, holiday pay – organised labour is behind many of the rights we have today. We must mobilise in our thousands to fight the government’s latest effort to crush it.

Jeremy Corbyn is the Labour member of parliament for Islington North 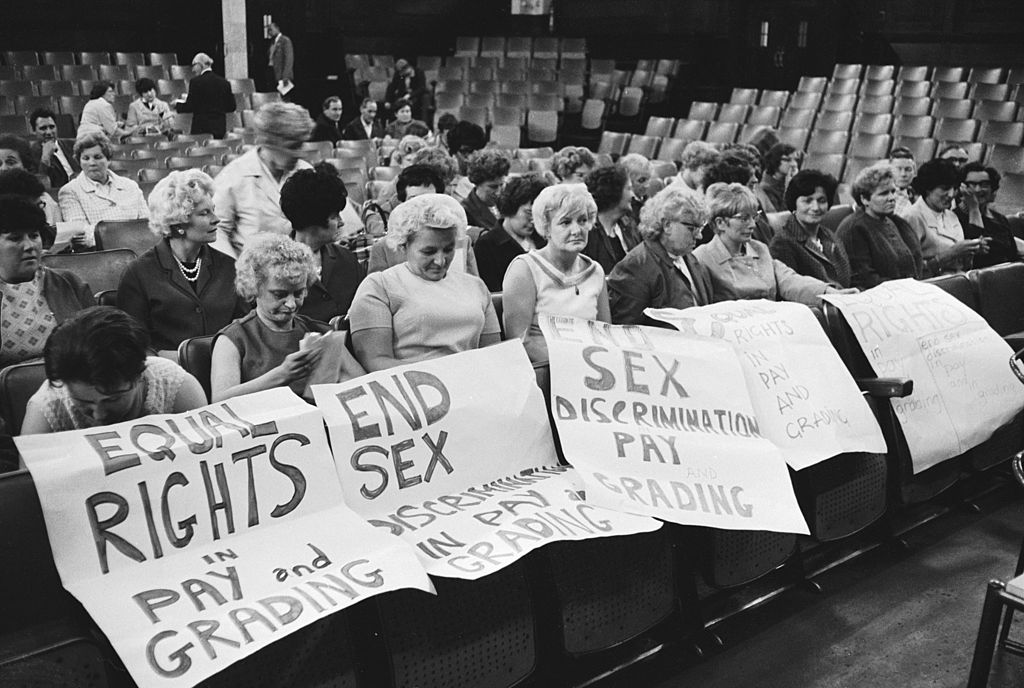 Thank you very much for fighting for us. We are very proud.’

Gwen Davis recalls the feeling of solidarity when she and 186 other women went on strike on 7 June 1968. They were working as sewing machinists in Dagenham, in of the most profitable car-production plants in Britain, employed to make covers for car seats. Following Ford’s decision to re-classify its wage structure, women learnt that they would now be categorised as ‘unskilled’ and subsequently receive lower pay than the men working in the same plant. Collectively, they decided to take industrial action in protest of such egregious pay inequality, which inspired other female workers at a plant in Halewood, Merseyside to down their tools too.

Ford’s production line came to a halt. In taking strike action, the women showcased something that could be said of workers everywhere: without their brain and muscle, not a single wheel can turn. As Gwen Davis recalls, they faced hostility, but they also mobilised a wide-ranging coalition that supported their demands. Many women in particular would come up to them on the picket line and thank them for standing up for principles of gender equality, fairness, and dignity in the workplace.

Their bravery did not just change the lives of female workers in Dagenham. It changed the lives of female workers across the country. The year after the strike, the National Joint Action Campaign Committee for Women’s Equal Rights was born. The year after that, the government passed the 1970 Equal Pay Act which, for the first time in Britain, legislated to equalise the pay and employment conditions of men and women.

Alongside the Equal Pay Act, we can also thank strike action for a shorter working day. Protesting against long hours, sometimes reaching 16 hours a day, gas workers and dockers went on strike throughout the 1880s to secure something that would soon become the norm: the eight-hour working day. From the Equal Pay Act to the shorter working day, higher public sector wages to the two-day weekend, and parental leave to holiday pay, organised labour has secured victories for us all.

The gains workers have made, and the triumphs they are yet to win, are under threat. New government legislation intends to override a worker’s right to withdraw their labour, forcing them to work against their will. This includes a requirement for certain industries (including the health service, rail, education, fire, and border security) to provide ‘minimum service levels’; bosses will be allowed to sue unions and sack employees if these minimum levels are not met. In doing so, the government is in danger of contravening a fundamental democratic right, a right that is enshrined in the International Labour Organisation, dating back to 1919.

We already have some of the toughest anti-union legislation in the world. To pretend that the current economic crisis can be fixed by toughening them further is absurd and insulting to the millions of workers struggling to get by. The government has done its best to turn railway workers and postal workers into public enemies. Next, healthcare workers and teachers, campaigning to defend their jobs and defend our public services. In accelerating its fight with unions, the government is forcing workers to pay the price for a crisis caused by decades of austerity, economic mismanagement, and corporate greed.

It is a strategy of scapegoating that runs through the government’s entire agenda. The government’s latest attack on workers is part of a much broader assault on human rights; Suella Braverman is intent on withdrawing from the European Convention on Human Rights and reneging on the 1951 UN Refugee Convention. It is no coincidence that the government is targeting ordinary workers and refugees at the same time. They are all being blamed for a crisis that the Tories created. Their hope is that the scapegoats turn on each other.

Repealing anti-strike laws is not just imperative. It’s the bare minimum. We do not need to restore, defend, or protect workers’ rights. We need to build, expand, and amplify them. That’s why I will be standing up in Parliament, speaking out in the strongest terms against this legislation and campaigning to encourage my colleagues from all parties to do the same.

As well as repealing anti-trade-union legislation (both historic and modern), we need to re-emphasise the message that underpinned the women’s strike in Dagenham: those who keep this country going will not be taken for granted any longer. That means redistributing wealth from those who enjoy wealth to those who create it. If we’re prepared to clap for workers on our doorstep, we should be prepared to support them on the picket line and back their demands for an inflation-busting pay rise, funded by taxes on wealth, corporate profits, and the highest earners.

This distributional politics must underpin any programme of devolution. After all, local governments and communities require the financial capacity to tackle the crises they will be tasked with solving. The only way that workers and communities can truly ‘take back control’ is by transferring wealth and ownership from top to bottom. Indeed, being honest about our nation’s finances is not the same as pretending we have no money to spend. Instead, being honest about our nation’s finances means having the courage to tell the public where that money really is: in the pockets of CEOs, shareholders, and the 1%.

The Tories’ latest attack on workers is only the beginning. My hope is that the government has overplayed its hand; we must mobilise in our thousands to fight back. That means launching a new wave of union recruitment, which brings together otherwise disconnected workers: young people, those in the gig economy, and those who perform unpaid and unrecognised labour at home. The recent action by Amazon and Starbucks workers gives us much-needed hope that we can succeed.

We’re starting the year at a time of immense and intense stress for many workers, particularly in healthcare and education. It is essential that we ensure the collective solidarity that we showed in 2022 not only carries into 2023, but grows in size and stature.

The strikes up and down this country are not just about pay. They are about poverty, hunger, stress, insecurity, inequality, and injustice within our society. Today’s turbulent terrain and societal fractures cannot be resolved or healed without a politics of hope. A politics that stands up for those who run our public services, teach our children, keep our communities connected, look after us when we are sick, and care for the most vulnerable. As women in Dagenham taught us in 1968, when you stand by striking workers, you stand up for a better world.

The British economy is not doing well in any sense. Many UK citizens lead an existential battle of survival. All this has been caused by austerity, which was a miracle solution to solve all economic […]

We have posted three excellent articles today concerning what central banks and governments are doing, or should be doing, in the turbulences resulting from the Coronavirus. Michael Roberts is an Economist in the City of […]

I saw first-hand how Lula’s victory came from a left-led coalition of political parties and social movements. Who needs focus groups when you have solidarity? Jeremy Corbyn is a Labour Party MP for Islington North […]