For those of you who feel somewhat overawed by political economics or Marx, here is a good introduction, which will be followed by further such articles by John. We thank John, who revised the original article to make it more accessible to readers who have had no or little exposure to economics. 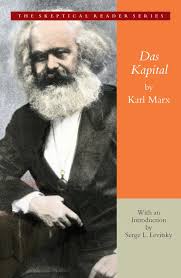 Few economists have been as misrepresented as David Ricardo. Fewer still have been vilified as much as Karl Marx, almost always for the wrong reasons. Yet Marx produced a wealth of key concepts and analysis that would lay the basis for modern macroeconomics, albeit not in the original terminology Marx used. These are found in the three volumes of Capital, only the first of which Marx lived to edit in its final form.

When most people think of Marx, a theory of labour “exploitation” usually comes to mind, that workers are paid less than the value of what they produce. Marx carefully develops his theory of exploitation in the first few chapters of volume one of Capital, the most sophisticated version of the analysis that workers receive less than the value of they produce. However, the idea of exploitation was not unique to Marx. Until the mid-19th century this theory of distribution was endorsed by all major economists including Adam Smith, David Ricardo and John Stuart Mill.

Marx made important contributions to macroeconomics that do not require endorsing the labour theory of value.* The most important of these are 1) the distinction between economic expansion and accumulation, 2) theory of technical change, and 3) causes of recessions and depressions.

His analysis of the aggregate economy begins with the insight that in a market economy production is for sale, initiated by capitalists with the intention of generating profit. His aggregate economy has two products, consumption goods and producer inputs, aggregated by calculating the labour time required to produce them. One need not adopt the labour input measure to develop his analysis. An equally valid simplification would be to ignore inflation and aggregate with market prices.

In Marx’s schema capitalists initiate production by hiring workers and purchasing material inputs. They exchange money for commodities that makeup the inputs of production. These inputs pass through production to become a different set of commodities, and the new commodities have a greater value than the old due to the value added by labour). These newly produced commodities must be sold, or “realised” to use Marx’s term. This is the “circuit of capital”, money generating ore money through production.

This simple flow of money into more money provides the basis for the analysis of economic expansion, and technical change. The latter occurs in the production process through improved machinery that reduces the labour input. In this flow, economic expansion without technical change is strictly equivalent to Keynesian national income equilibrium which I discuss in the next article. As for Keynes, whether the economy expands to a higher equilibrium depends on whether net fixed investment is zero or positive.

A central issue is whether total demand is sufficient to ensure that everything produced is sold. Detailed analysis of matching demand to production appears in the second volume of Capital, which few people read, not even Marx’s most enthusiastic fans. It is often quipped that that if one wants to hide something from a Marxist, tuck it into volume II of Capital.

Marx was the first economist to address seriously the problem of sufficient aggregate demand (“demand failures”), though it appears in Thomas Malthus famous work, Essay on the Principle of Population (1798) in a prominent but non-systematic way. One of Marx’s insights was to specify the fundamental source of the aggregate demand problem, which is the separation of the production process from the distribution and sale of that production.

Capitalists organise production and have ownership of it. They must transfer, sell, those goods and services to other capitalists (in the case of inputs, business services and machinery) or to workers and other capitalists (for consumption commodities). Workers’ incomes come as the direct consequence of capitalists hiring them, epitomised in the famous quotation from Joan Robinson that “the misery of being exploited by capitalists is nothing compared to the misery of not being exploited at all”; that is, being paid less than what one produces is better than being unemployed.

Therefore, all sales are driven by capitalists initiating production. The more robustly capitalists spend to initiate production the greater are profits and wages, thus total demand. This argument by Marx is captured in another quotation from Robinson, “workers spend what they get, and capitalists get what they spend” (which she attributed to Michal Kalecki). The driving force of capitalist investment anticipates Keynes’ treatment of consumption and investment as induced and autonomous variables.

The nature of capitalist circulation creates separation of production and sale. Production is matched or united with its sale by business expenditure. It remains to account for why business expenditure fluctuates, generating “business cycles”. Marx explained the systematic instability of business investment through his theory of technical change. The discussion of aggregate demand in volume II has the purpose of demonstrating that in the absence of technical change the circuit of capital tends to repeat itself at the same or an expanding level until disrupted.

Marx’s explanation of the causes of disruption that result in recessions and depressions is disarmingly simple. Introduction of new techniques undermines the market value of the capital stock of companies using older production methods. As a result, many businesses find it increasingly difficult to service the loans that purchased the older technologies. This is a striking argument, which treats the dynamism of a capitalist economy in which technical change is inherent as simultaneously the source of the recurrent recessions and depressions.

The conviction that capitalists expansion undermines itself led many Marxians into rather unenlightening “break-down” theories, which predict and anticipate a coming crisis that will destroy capitalism and bring on socialist society. Not such mechanical break-down arguments appear in Marx’s own writings. The closest he comes to a teleological prediction of capitalist collapse is his argument that the tendency of capitalist production to concentrate workers large production facilities raise theirs class consciousness.

Marx left an extremely important contribution in his analysis that instability is inherent in market economies. How that instability might be managed to prevent severe recessions and depressions would await the work of Keynes, the subject of the next article.

* In a letter to his collaborator and patron, Frederick Engels, Marx wrote, “The best points in my book [Capital Volume I] are: 1) the two-fold character of labor, according to whether it is expressed in use value or exchange value. (All understanding of the facts depends upon this.) It is emphasized immediately, in the first chapter; 2) the treatment of surplus value independently of its particular forms as profit, interest, ground rent, etc.” I discuss these in Chapter 3 of Capital, Eploitation and Economic Crises (first edition here) and the ones I develop here derive from those two points.

Tomorrow’s town planners could take a leaf from nature’s book with timber buildings. More than a leaf: the whole tree and all the cuttings as well. Tim Radford is a founding editor of Climate News […]

In economics the trickle down theory has been debunked as an ideological instrument in the class war from above. In education and media however there exists another sort of trickle down that does function: ideas. […]

The week starting March 9th has been another difficult one for the Spanish government as regards minority issues and, more particularly, the way in which the trial against the Catalan independentist leaders (February-October 2019) was […]