Beyond the positive results it could possibly achieve, Spain’s new government has the chance to show that politics still has a purpose in European democracies

Juan Laborda is professor of Financial Economics and Derivatives at Universidad Carlos III.

Andrés Villena is an economist and PhD in Sociology, and has published Las redes de poder en España.

Both are members of the Red Modern Money Theory (MMT) Spain. 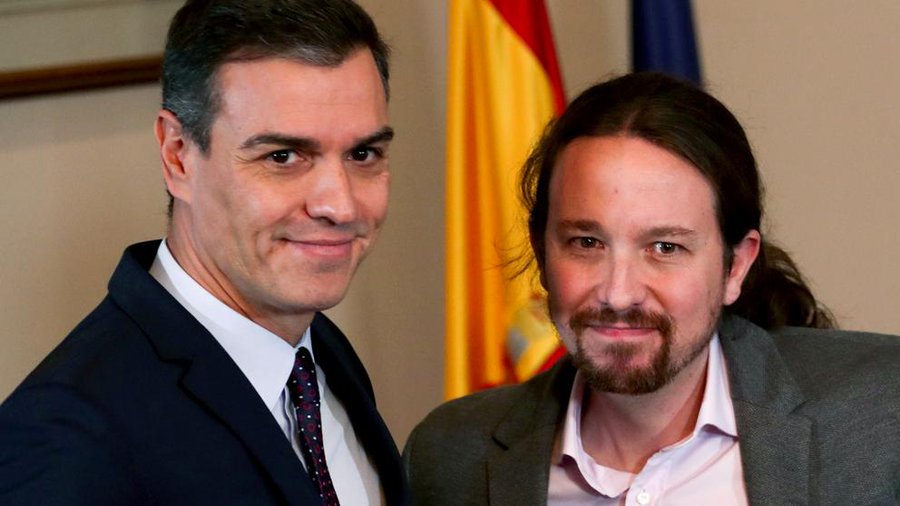 The newly elected coalition government consisting of the Spanish Social Democrats (PSOE) and Podemos will challenge the dominant reigning dogma, that set of premises, beliefs and assumptions that are deemed immortal, but in fact come and go. Knowing in detail the experience of the government headed by François Mitterrand in 1981 allows us to understand the structural limitations for a government with progressive and imaginative policies to bring about an economic change that can be exported to the rest of the nations of a Europe currently in perilous stagnation.

In 1981, François Mitterrand gained enormous political power in coalition with the French Communist Party, thanks to a programme of 110 reforms aimed at tackling a long crisis of capitalism, which at the time was dragging on in disarray, with a high level of inflation and unemployment.

Mitterrand launched a plan of nationalisations that affected part of the banking sector and large companies in financially difficult situations; fiscal policies were aimed at increasing social protection through an expansion of the welfare state; salaries, union rights, and forms of representation in the workplace were strengthened. A contraction of the French economy in the midst of the world recession of the early 1980s was avoided, allowing for growth of 1.5% and unemployment to barely reach 1.9%; in contrast, in Germany, unemployment had shot up to 5%.

But the French green shoots ended up being crushed by three factors that were feeding back into each other. First, the deflationary policies applied in other nations, such as the United States, Germany, and the United Kingdom, which operated with diametrically opposed measures. Conditioned by fear of inflation, these governments raised central bank interest rates to dry up the real economy, thereby moderating inflation and, furthermore, the resulting increase in unemployment would serve to “disarm the world of work”, as an advisor to Margaret Thatcher would declare a few years later.

French economic growth was hampered by the side effects of these policies: the increase in the value of the dollar and the then deutsch mark raised the price of imports for the French economy significantly. The problems of inflation were aggravated; the trade imbalances, which persist in France, became increasingly worrying.

Secondly, because of a conditional monetary policy. In other circumstances, France could have responded to adversity by devaluing the franc or by freely floating the national currency so that its products became more competitive on the international market and also so that expensive German and American products could find competitors in France itself. But, after the death of the Bretton Woods agreement (1973), some nations, including France, had decided to peg their exchange rate to that of others to ensure monetary stability. France, within the European Monetary System, was obliged to prioritize the control of inflation and cost competitiveness.

The third pillar was not exactly minor. As had also happened in the United States, the organisation of France’s business leaders, which was intimately connected, had already been holding back investment for several years in response to the depressed rate of return. Mitterrand’s entry and the advances in labour and union rights triggered a distrust that materialized in less investment and greater capital flight.

Defeated by the right in the 1983 legislative elections, Mitterrand refused to use his powerful social base to take control of investment and ended up giving in to a new “common sense”, which was to ensure monetary stability in order to attract investment.

Will the nightmare be repeated in Spain? A failed model and a new context of opportunity

Any attentive spectator todayhas been able to learn during the past decade that this economic “common sense” has been radically shattered since the crisis. The dogmas of early neo-liberalism are slowly being buried. Firstly, deflationary policies, the industrial scourge against inflation of the 1970s, has left our economies defenceless, with a combination of latent deflation, rampant unemployment, poverty, and uncertainty keeping the main centres of economic dogma, including central banks, without any real orientation.

Secondly, the European Monetary System, which in the meantime has evolved to the euro, is an area in which competitive currency devaluation is science fiction and in which the adjustment variable in recession for some countries, such as Spain, is unemployment. The malaise caused by the management of the crisis could lead to a collapse if we are faced with another critical scenario.

Thirdly and lastly, the business sector in Spain offers glimmers of hope. The employers’ associations CEOE and Círculo de Empresarios have reacted to the government’s announcement with panic. Investment in Spain has also been stagnant for many years and no ‘fiscal revolution’ to be paid for by citizens, will restore the lost ground. The declarations of the American Association Business Roundtable suggest a change of direction: business capitalism must stop being obsessed with the value of shares, when the threats of climate change, inequality, and other negative externalities will end up, in the long term, making the current conditions of existence impossible.

Knowing the complexity offers keys for the elaboration of a consistent and ambitious economic programme, especially in a historical context in which the old ideas, mere beliefs, are about to disappear. The next government must undertake an ambitious fiscal expansion – with the support of the European Central Bank – aimed primarily at halting the drain on employment and poverty that Spain is experiencing, with a well-designed combination of measures that have already gone beyond the marginal stage of the debate and that consist, in short, of guaranteeing universal minimum standards of living, quality work or a combination of both conditions. The challenges of the present, such as ageing and climate change, represent opportunities for channeling these programmes for social protection, personal dignity, and the use of talent and human capital in a productive manner. It should never be forgotten that there is no greater waste for a country than a double-digit unemployment rate.

The change in Spain must also have as its goal to become a model in Europe. The increase in wages and demand would set off some alarms typical in the model adopted by export-oriented nations. But growth can also be dedicated to expanding, improving, and optimising a rather neglected productive capacity, increasing productivity that has been burdened by the neo-liberal era.

In a system of relations between economies and countries, everyone is affected. The reactivation of national economies, in the opposite sense to the one employed in the past decades, could improve the situation of the wealthiest nations. Interest rates would rise, mitigating the ‘income effect’ which, until now, has discriminated against savers in this stage of ultra-low interest rates. Consumer demand would increase in traditional exporting countries, reducing their excessive current account surpluses, thus contributing to inclusive growth in the Eurozone. Possible inflation, the result of this whole process, would serve to progressively reduce the debt of countries that, like Spain, Portugal or Greece, which are incubating infinitely worse problems.

Burying the ‘Mitterrand syndrome’, and the subsequent dogma of ‘no alternatives’, entails both risks and opportunities, as well as an enriching debate on economic policy that many citizens have long wanted to witness and understand. The opportunity of a coalition government lies in the possibility of demonstrating that politics still makes sense in European democracies.

Richard Murphy – There is a post-Covid society to shape, and it is not like the one that existed before we went into this

We all seem to have forgotten that before COVID we were, and still are, confronted with an existential climate crisis and an economic recession due to the failures of neo-liberalism (again). Richard Murphy is a […]

Zacarias Pereira da Mata / shutterstock Nicholas Beuret, University of Essex The latest UN climate talks, known as COP24, have just concluded. The supposed story this time was one of a grinding victory by the […]