The Spain that was forged in the 1980s has become an explosive combination in which Cádiz is seen as a symptom and reflection of all this. 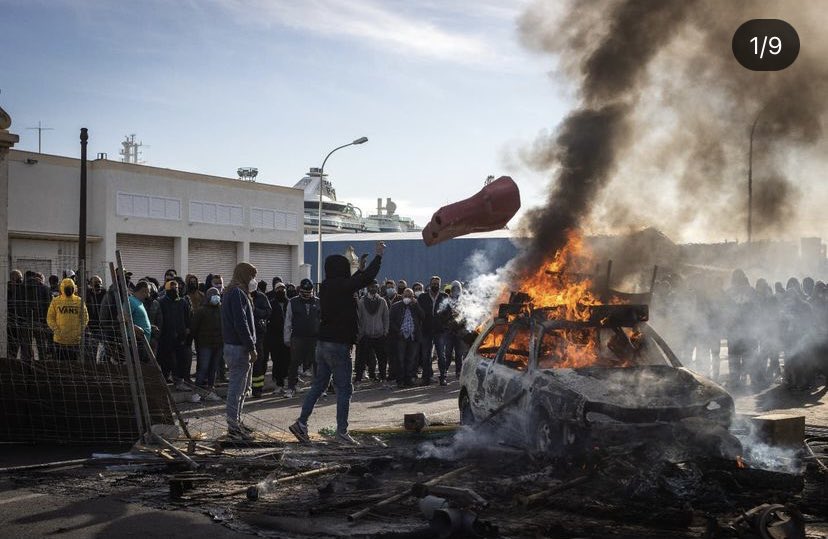 The strike in the metal sector in Cádiz is a reflection of the economic, social, and demographic problems that have been building up during the years of our fragile democracy. Throughout these years, decisions were taken that have ended up being very negative for our future. The Spain that was forged in the 1980s has become an explosive combination that requires decisive action to unravel practically all the threads woven by the country’s power networks. We already know the consequences: deindustrialisation, delocalisation, extreme financialisation, rentierism as an economic engine, and a hollowed-out Spain with no future. Cadiz is a symptom and reflection of all this.

To understand the effects of deindustrialisation, I have always relied on the studies of the Korean economist Ha-Joon Chang, possibly the world’s leading expert on development economics, and undoubtedly one of the most relevant heterodox economists on the current scene. Following the analysis of the economist Ha-Joon Chang, Spain since the mid-1980s, with the entry into force of the Treaty of Accession to the European Community, is an example of why the free market and globalisation, as it has been designed, does not work. Spain was required to undergo industrial restructuring and to liberalise and open up its goods and services markets, which, together with the free movement of capital, ended up being absolutely disastrous for our future. The role we were “assigned” implied massive deindustrialisation, outsourcing of the economy and excessive power to the banks.

In contrast to the Spanish case, Chang analyses the case of his home country, and concludes that, unlike Spain, Korea in recent decades grew various infant industries through tariffs, subsidies and other forms of support until they were strong enough to withstand international competition. All banks were government-owned, so it was able to direct credit to the various productive sectors. Some large projects were implemented directly by state enterprises, although the country had a pragmatic rather than ideological approach to state ownership of the means of production. If private companies worked well, fine. But if they did not invest in important sectors, the government had no qualms about setting up state-owned enterprises. And if private enterprises were poorly run, the government would take them over, restructure them, and then usually sell them.

The Korean government also had absolute control over foreign trade. They kept a tight rein on foreign investment, welcoming investment in some areas with open arms and completely closing their doors to others, in accordance with the imperatives of the national development plan. As Chang points out, “the Korean miracle was the result of a clever, pragmatic mix of the market’s drive and economic dirigisme”. All these basic lessons were forgotten by our leaders.

Massive deindustrialisation, outsourcing of the economy and excessive financialisation, which accelerated and inflated the real estate bubble, led to a production model based either on labour-intensive activities or on other rentier activities – tourism and various other bubbles. This did not prevent this model from coexisting with an extraordinary domestic manufacturing export sector – our exports have been growing steadily since 1994 – which, due to the inaction of our governments, was gradually taken over by foreign capital. As a result, investment decisions, staffing levels and wages for these jewels began to be determined beyond our borders.

The production model, the key to understanding labour relations

The model that was chosen in the 1980s, together with the assault on our crown jewels, has affected labour relations, and the labour factor itself, to a great extent. Either they are low value-added activities, or we are mere assemblers, and in what we are really very competitive, foreign capital begins to control it and decisions are taken abroad, with the continuous threat of relocation of production that this implies.

That is why the response of the national elites has always been the same, the search for flexible labour markets with the disruption of unions and workers, through the countless labour reforms. The problem is that this has not led to any improvement in competitiveness but simply to a fall in the workers’ share of national income to the benefit of capital and the wealthiest. To understand this idea I recommend the latest book by Michael Pettis, the former chief economist of Credit Swiss First Boston and now professor of finance at Peking University: “Trade Wars Are Class Wars: How Rising Inequality Distorts the Global Economy and Threatens International Peace”.

Spain as unsubstantial as a reflection

Allow me to introduce a third element, the geographical design of the economic and political power of our beloved Spain, which has resulted in profound inefficiency. In the capital of the Kingdom, everything that allows the patriotic economic elites, basically rentiers, to live at the expense of their fellow citizens, is forged. These are the same elites who in the past, during the 1st Bourbon Restoration, designed a railway or road network that converged, and still converges, in Madrid. It is enough for them to turn to Madrid to achieve their objectives by moving the right pieces, in ministries, agencies, consultancies and lobbies. It is a quasi-unique design that not only serves the interests of the power networks, but also depopulates and impoverishes the rest of the country. As we have already argued in these lines, if we want to promote a change in the productive model, confront a hollowed-out Spain, promote an open society, and improve the living conditions of our citizens, a necessary, though not sufficient, condition is the decentralisation of public ministries, bodies and institutes beyond Madrid, especially those related to to the awarding of money in public tenders..

The economic, sectoral and geographical design of the Spanish productive model has meant, in short, and as a corollary, that the private sector is incapable of generating sufficient employment, while the economic authorities have abandoned, except in the Basque Country, the use of active industrial policy – it is obvious that they have not read Mariana Mazzucato’s book El estado emprendedor: Mitos del sector público versus privado (“The Entrepreneural State Debunking Public Vs Public Sector Myths”). And all these fronts, from deindustrialisation, to a hollowed-out Spain, to the financialisation of almost everything, are reflected in an increasingly evident and growing social discontent. For this reason, what happened in Cádiz was yet another warning, a symptom that can only be tackled by unravelling the fabric woven by our power networks, and where the State must undoubtedly opt directly for being the industrial engine of our country. All the rest is just a matter of time.

Another in the series of Richard Murphy’s didactic economic pieces. Just the thing for beginners and intermediates. Richard Murphy is Professor of Practice in International Political Economy, City University of London. He campaigns on issues […]

The EU’s neocolonial ambitions seem to know no limits any more. An so much for progressive Scandinavia. The African Union condemns in the strongest terms possible, Denmark’s Aliens Act, which was passed recently and which […]