Before diving into an analysis of the German election, there are two facts that need to be noted.

1) German elections are decided by those voters who are voting against a party, not by those who support the policies of a party.

2) German politics is still stuck in the past millennium.They have made no developments in economic or social policies and show no signs of doing so in the near future. Their policy is dictated by the best paying corporations.

What we are seeing is the slow demise of German democracy otherwise know as There Is No Alternative. As I repeatedly write Germany has one neo-liberal party with six factions. Thus the election results are irrelevant. Little will change as has been the case over the past twenty years. Even on the much touted question of climate change none of the political parties, not even the Greens, had a programme that would make meeting the 1,5 degree global warming target possible. And as we know, that is the best case as nothing is as ephemeral as campaign promises.

All of the parties had one message in common: angst. Angst defines German history and character. Angst of the Slavs, the French, Western Europe, the Jews, the communists, the Soviet Union, Russia, Southern Europeans of the EU stealing their treasure, now China. In this election there was angst of climate change and angst of climate change policies taking away people’s prosperity and SUVs. The centre-right Christian Union even introduced the spectre of a socialist coup which included all the other parties including the ultra-neoliberal Liberals (FDP) who really have only two items on their political agenda: being corrupt and reducing taxes for their clientele. All that really seems to count is angst.

Angst is especially effective with older voters – and to be truthful they are the only voters that count in Germany. Almost 60 percent of German voters are over 50. Worse yet, they tend to go and vote as many younger voters do not, convinced that their votes are ineffective against the geriatric majority. Just an example: of the members of the Social Democratic Party (SPD) 11% are over 50, 21% over 60, 24% over 70, and 17% over 80. The Christian Union has similar numbers. As two thirds of the SPD members are men as are 73% of the Christian Union, German politics is shaped by angry old white men. This was reflected in voting as two-thirds of the voters for both these parties were over 60. 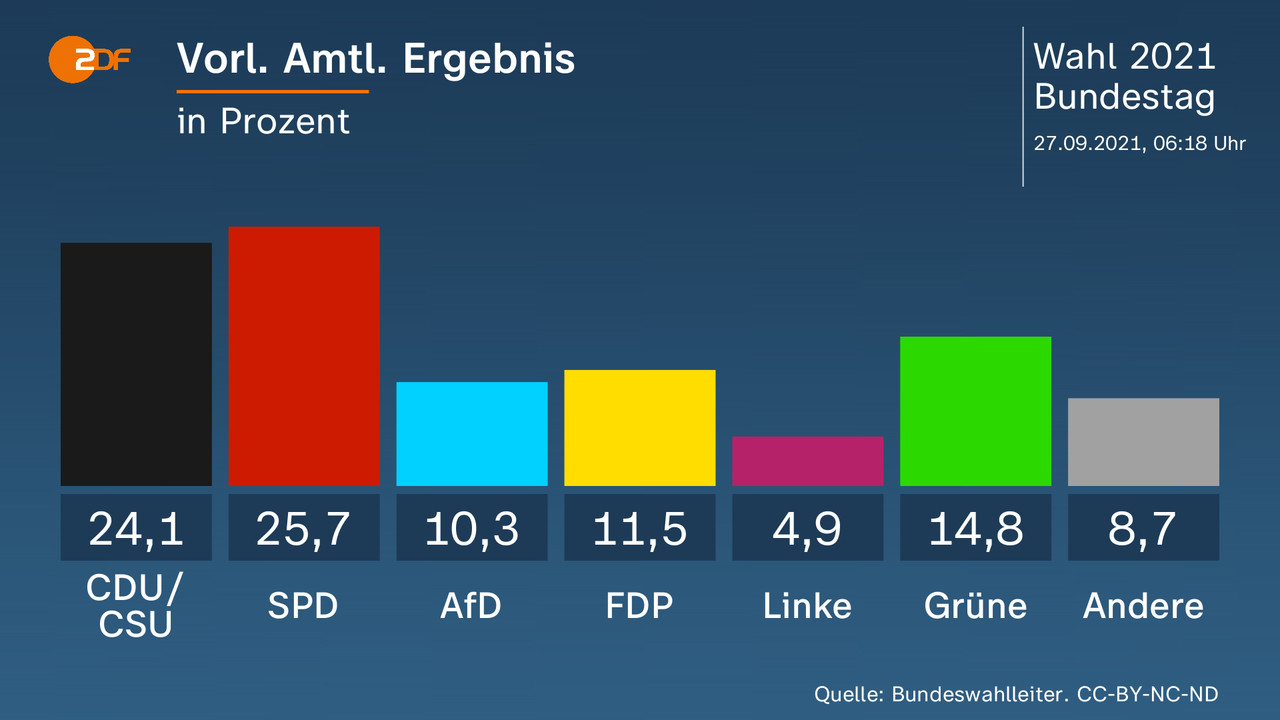 The reason for this violent reaction was the chancellor candidate of the Union, Armin Laschet. He is a provincial party operator with no charisma. He was Merkel’s choice as a successor, but then most everything Merkel ever touched has ended in failure. Laschet is the German equivalent of Boris Johnson, uninformed, mendacious, and opportunistic. The difference is that Johnson had a cause, Brexit. Laschet had nothing to offer except angst. Typical for Laschet was the moment when he was caught on national television having a good laugh as the German president offered his condolences to the families who lost members in the summer floods. For the angry old white men of the Union, after sixteen years of Merkel’s centrist policies, it was time for some good old conservative values. What they got was a centrist bumbling provincial politician. The election result of the Union with just 24.1 percent of the vote was by far the worst in the history of the party.

Not that the candidates of the other major parties were any better. The Greens are the party of moral posturing. Forgotten is that the previous time they were in government (with the Social Democrats) they were responsible for slashing taxes for the rich, the socially unjust Hartz IV social programme, and Germany’s engagement in the Afghan invasion. In best form they decided for a colourless, mediocre chancellor candidate with Annalena Baerbock. After sixteen years of a woman chancellor, putting up a woman candidate was not really a radical step. Maybe the Greens thought that they could replace the old Mutti with a young Mutti, signalling continuity in politics. Despite assertions of being environmentally radical and social, they have not changed their conservative policies. For ten years the party has led the government of the major state of Baden-Württemberg and there is nothing to show for it, neither in progressive or environmental policy. One kept hearing from people that they were voting for the Greens, not because they supported Baerbock or the party, but because they were the only party with a half-decent climate programme. As it was, the Greens, who were well above the 20 percent mark in the polls at the beginning of the election campaign, ended up with 14.8 percent of the vote – almost halved. This might be their best election result ever, but it was disappointing, to say the least.

The candidate of the Social Democrats, Scholz, is another colourless politician, deeply involved in a number of scandals as current German finance minister. His strength in this election campaign is that he is so boring that he could not make any mistakes. And being boring does not make angry old white men angry and does not cause angst. Although the result was the second worst in the history of his party (25.7 percent), Scholz ended up ahead of Laschet thanks to the angry old white men who formerly voted for the conservative Union. Without them he would have produced the  party’s worst election result ever, having been polling at 15 percent.

The Liberals, a perennial protest party, did not make any major gains remaining at round eleven precent. Despite all the votes coming from the Union, just as many protest voters from the previous election gave up on them and posted their protest votes with other political parties. Half a million simply did not vote this time round. Surprising is that many young people voted for them, but with the other chancellor candidates they may have seemed attractive.

The most surprising event of the election however occurred briefly after the results were announced. Robert Habeck, who now seems to lead the Greens, and the leader of the Liberals, Christian Lindner, announced that they were meeting to discuss a common plan for the future government coalition. After their poor election results, the Social Democrats and the Union will need the support of both these parties to form a government. The alternative would be still another Grand Coalition with each other, which was declared out of the question after the previous election, but happened anyway.

So what do the Greens and the Liberals, who in mainstream media are portrayed as opposite poles, want? Both parties have not had their snouts in the “Big Trough” of national government for many years (the Greens since 2005, the Liberals since 2013). One should be clear that this is where the real money is. One has billions of euros to dispensate, and a certain percentage feeds back to the political parties via donations, jobs, sponsorship, and many other possibilities. Add to this all the well paid jobs at their disposition for themselves, friends, and family while in government. When corporations became aware of what was coming they started making massive donations to the Greens and Liberals to ensure their obeisance after the election. According to the NGO Lobby Control both parties each received more than the SPD and Union together.

They also know that not being in government will have the same positive and negative effect upon the Social Democrats and Union. Thus they have apparently decided to join forces to get the best deal possible. This is a unique situation in post-war Germany. Usually the winner of the election forms the government and receives the chancellorship. Here there is simply too much money involved and political principles have never really been a hindrance in questions like these. Thus both will be vying for the coalition. The current situation has already been termed an “auction”.

Whatever happens, there will be no serious change in German political policy. The only challenge the government could encounter will be with regard to climate change from the courts, but these can be ignored or circumvented as has happened all too often in the past. So really nothing has changed in Germany – maybe the make up of the government coalition.

Branko Milanović – How to Create an Ethical Country, If not the World: Part 2 Review of Paul Collier’s “The Future of Capitalism”

In this second part of his book review Branko Milanović encounters a book with some progressive elements, but equally conservative solutions for a reformed capitalism. Sounds like another Oxford University Keynesian patrician. Branko Milanović is […]

Coming to grips with the value of the dollar and US debt and its consequences for the world economy. Frances Coppola  is the author of the Coppola Comment finance and economics blog, a contributor to […]

Meanwhile back at the real economy…A coalition of gig economy researchers at Fairwork explain how gig workers are being hit hardest by COVID-19. Co-authored by Funda Ustek-Spilda, Mark Graham, Srujana Katta, Kelle Howson, Fabian Ferrari and […]