While many Europeans are obsessed with the disaster that is supposed to engulf Britain after leaving the EU, hardly anyone is following the crisis unfolding in the EU. It is time to connect the dots.

Mathew D. Rose is an Investigative Journalist specialised in Organised Political Crime in Germany and an editor of BRAVE NEW EUROPE. 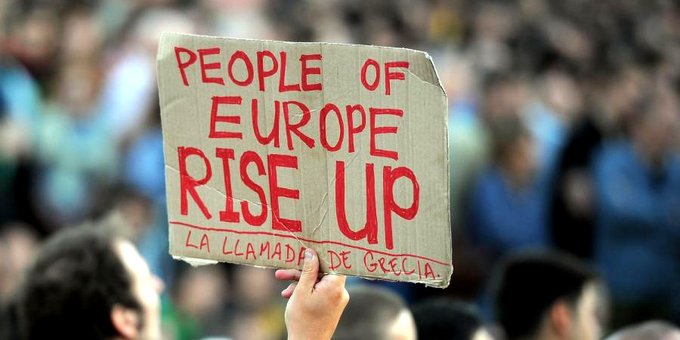 So, it has finally happened. A EU nation has left the Union. What everyone is missing is the fact that this is the end of a significant political era in Europe: the death of the fabricated teleological discourse of the monolithic agent of peace, democracy, and progress in Europe, the European Union.

Yes, there had been democratic setbacks along the way for the EU, such as the Danes rejecting the Maastricht Treaty in 1992 (A second referendum was forced upon them and passed). They then rejected the Euro in 2000. Ireland spurned the Nice Treaty, but again a second referendum was crammed down their throats. 2003 the Swedes rejected the Euro. The proposed EU Constitution was turned down by French voters in 2005 and Dutch voters in 2008. In an act of democratic infamy, the constitution was withdrawn and then passed as the Treaty of Lisbon, thus avoiding seeking democratic approval from EU voters. Then there was Iceland that in 2013 withdrew its application to join the EU as the consequences became clear. That was hushed up.

In 2016 with Brexit the majority of voters of an EU nation in a democratic process decided that the European Union had not fulfilled its promise. They were of the opinion that they would be better off outside the EU, democratically determining their own policy, free of a superimposed neo-liberal regimen. Good, the EU political elite claims that the referendum had nothing to do with the Union, but was the result of the failure of the political class in Britain itself and a deceived British populace. The EU political elite has not even once asked what their role in Brexit might have been.

Let us leave the EU-Romantic, the Ode to Joy, and all the “Oooooh EUs” behind us and we shall recognise that the EU has been mainly about the imposition of neo-liberalism in Europe. As many of us have learnt from Quinn Slobodian’s brilliant book “Globalists”, neo-liberalism was just as much a political as an economic project, entailing the destruction of democracy, which meant reducing the nation state from a functioning democratic institution to a geographical unit with a flag, national anthem, folklore, and a national team for sporting events – and of course defending the interests of capitalism with state terrorism.

The Four Freedoms of the EU have nothing to do with democratic aspirations, instead serving the domination of international corporations: Free movement of capital, services, goods, and labour (mostly the cheap sort from Eastern and Southern Europe). Where this is all going was made clear by the ugly face of the EU, Guy Verhofstadt: “The world of tomorrow,” he recently claimed, “is not a world order based on nation states or countries. It’s a world order based on empires.” Meant is a financial and trading empire, supported by an EU army, which is why the EU is investing much more effort in the creation of an army than stopping the climate crisis. And EU citizens? They are their to serve The Empire. This is not an empty threat. Verhofstadt has been made head of the planned EU Conference on the Future of Europe, still another top-down un-democratic exercise by the EU political elite.

The whole discussion about Brexit has been fatally flawed, driven by mainstream media. Their discourse has been a reversed Star Wars narrative, the virtuous Empire versus the nefarious Republic. In fact, the EU has been class war from above and a majority of British citizens voted to take a first step to end this. The EU political elite and continental corporate media put the blame on a band of second rate political opportunists who exploited the political situation to catapult themselves into power. Opportunists need opportunities, and the EU is ceaselessly providing these. It is the EU political elite and their neo-liberal TINA that have created the populist movement in Europe, something that so many economists (non-German) have been warning of for years. The EU “Liberal Democrats” have been able to save themselves up to now by claiming that the populists are destroying the EU. Their message is: “It is the fascists or us!” It is just a matter of time until the retort comes “It can’t be any worse than what we have now” as occurred in Brexit.

Brexit has had one great advantage for the EU political class: It has distracted from the inexorable crisis of the EU. The EU hegemon, Germany, realises it is losing its grip on power as the political and economic situation in the Union deteriorates. Thus they pushed through a German as President of the EU Commission. Even here they were made aware of the current state of EU affairs, as the epitome of German political mediocrity, Manfred Weber, was rejected. They then sent the corrupt, failed German Defence Minister, Urusla von der Leyen, who only won thanks to support from the “far right populists” in Hungary and Poland (at what price we do not yet know) and EU parliamentarians for Britain’s Labour Party (who had claimed they were going to end such back room, corrupt, undemocratic practices and reform the EU from inside the Union).

Nor has the rightist populist movement reached its zenith. Thanks to German imposed austerity, Angela Merkel’s government is preventing any sort of economic recovery in Italy, which will most likely result in Matteo Salvini’s Lega coming to power. This will entail a further shift in power away from the Liberal Democratic EU political elite.

Meanwhile in the “good liberal democratic” EU states such as France and Spain, state terror is being used to control popular upheavals such as the Gilets Jaunes and striking workers against macron’s neo-liberal politic, or the demands for self-determination in Catalonia and the Basque Country. Are these events a bellwether of a “EU Great Discontent”, of even an “EU Spring”?

Next on the list of crises is the new EU budget minus the round 9 billion euro net contribution provided by the UK. That will result in even more austerity, and that while the Union is sinking into recession. The Liberal Democrats want to use this to punish the populists in the Eastern European member states, but these have become cognisant of the power they have, which has increased since the British status quo parliamentarians left Brussels.

To make matters worse, it is becoming increasingly apparent that German mercantilism with its massive export surplus, not only has a major economic downside, but also a political one, as the US and China can force Germany to change its policy – and Germany the EU’s – by threatening to introduce major tariffs on automobiles and automotive products.

Nothing demonstrates this better than the current climb down by the German government concerning what role Chinese Huawei should play in the roll out of 5G in Germany. Banning Hauwei apparently resulted in a threat by the Chinese government to clampdown on German auto exports. such as BMW and Mercedes-Benz, to China’s market.

At the same time permitting Huawei to play a role in Germany’s 5G network could result in retaliatory tariffs from the US, the largest export market for German carmakers. Already in December 2019 the US forced Germany with a threat of sanctions to end its participation in the building of Nord Stream 2, a nearly-completed undersea pipeline being built to bring Russian gas to Germany. Germany meekly protested, but acquiesced.

The German economy, purported paragon of German superiority, appears to be heading for a recession as world trade declines. Up to now, mainstream media has portrayed Britain as helpless and at its knees in future trade deal negotiations with the EU. Britain is one of Germany’s largest trading partners, the Germans having sold €82bn of goods to the UK in 2018. More important is the trade surplus that Germany has with Britain, round 26 billion euros in that year. This is not something that the British are oblivious to, and they too might wish to introduce a high tariff on cars manufactured in the EU. Germany alone exports cars in value of 14 billion euros to the UK.

Let us not forget, Germany has no qualms about selling other EU nations down the river to serve its interests, as we all observed in the financial crisis with Greece, Ireland, Spain, and Portugal. Thus the brave words of standing together may be nothing more than that. Words. That is why the Irish are shitting their pants, because they are the most vulnerable.

Thus while the remaining EU-Europeans are eagerly awaiting the great post Brexit  British Armageddon promised by their politicians and mainstream media, the real fireworks may be happening on the other side of the Channel in the near future. Brexit is not the end of the EU crisis. It is just a further link in a long chain.

Russia’s war in Ukraine, in addition to being a human tragedy, represents a challenge for the global economy. It calls into question monetary policymakers’ strategy since it will simultaneously harm growth and put upward pressure […]