Like so many absurd claims by economists, Trickle Down may appear to work in theory, but reality tells another story. Here the newest chapter.

Well, Trump’s boast turned to dust in 2019. US GDP grew by 2.3% in 2019, well below President Trump’s promise of 3%+ growth. The most recent GDP number proved that the tax cuts championed by Trump had no sustained impact on US growth.  Indeed , even the most optimistic forecasts see growth to stay well below 3% for the next few years. Of course, that won’t stop Trump in his State of the Union speech today in Congress proclaiming a huge rise in the living standards of working people under his reign.  Actually, cumulative growth under Trump has been lower than under both Obama and Bush Jnr.

Leading mainstream economist Jared Bernstein, a senior fellow at the Center on Budget and Policy Priorities, used to serve as the chief economist and economic adviser to Vice President Joe Biden.  He points out that the Trump administration’s bullish forecast was based on the belief that the tax cut developed and passed by Trump and the Republicans at the end of 2017 would increase the economy’s trend growth rate. “Trump and his economic team have long argued that the tax cuts — especially the big drop in the corporate rate from 35% to 21% would kick off a virtuous cycle delivering lasting growth above the roughly 2 percent that has prevailed for the past two decades. The idea was that lower corporate rates would incentivize more capital investment in things like factories or large equipment and that this added capital stock would permanently boost the economy’s productive capacity.”

As Bernstein says, this is ‘trickle-down’ economics as popularized by economists like Art Laffer and Rober Mundell, wherein tax cuts targeted at investors trickle down through the broader economy, lifting growth, wages, and spinning off more tax revenue to help offset the tax cut’s initial cost.  But this has turned out to be nonsense.  On the contrary, real business investment has declined for three quarters in a row, the worst such stretch since the last recession.

Why did Trump’s trickle-down economics not work?  Bernstein answers that Keynes explains all.  You see, there is a lack of effective demand in the private sector.  And “Keynesian economics, in this context, argues that in periods when private sector demand is inadequate to achieve full employment, the government should step in and temporarily make up for the lost demand through deficit spending.”

So it’s a lack of demand in the private sector.  It’s clearly not household consumption or demand, which continues to rise.  Indeed, Trump can boast that hourly wages (but not weekly earnings) are rising at nearly the same pace as they were just before the Great Recession in 2008 under Obama. 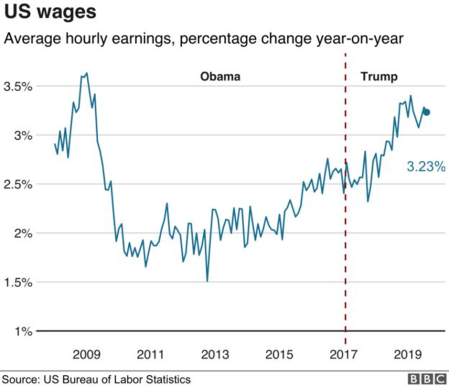 But it is business investment that is falling.  So, according to Bernstein, the capitalist economy needs “Keynesian fiscal jolts give economies a temporary boost by using, for a limited time, public-sector demand to offset lagging private-sector demand.”  Just for a limited time, mind; once capitalist investment is back on its feet, we can curb public investment and spending.  Although Bernstein notices that it may be necessary to “relentlessly go back to the Keynesian fiscal well year-after-year” or “we should expect such benefits to fade, as they have.”  Bernstein decides that “given the corporate sector’s unwillingness to invest their elevated after-tax earnings…we should consider a large public investment program” to boost productivity and ‘human capital’ (skills and education) and also to mitigate the effects of global warming.

Yes, capitalist investment ‘demand’ is too low.  But what Bernstein, and for that matter Keynesians in general, never explain is why the capitalist economy gets into this state of a lack of demand.  Private sector demand is too weak, ie businesses are not investing enough in productive activities.   But why?  There is no answer from Bernstein – it seems it just happens every so often.  And when it does, government must intervene to “make up for the lost demand”.

Keynesian guru Paul Krugman wrote a short book in the depth of Great Recession.  It was entitled End this depression now! – with the exclamation mark prominent.  In it he said, it matters less why there was a slump (in demand); more important was to take action to boost government spending to end the slump (in demand).

But surely unless we know why such recessions (or for that matter slowdowns in investment growth) take place at recurring intervals, we shall be trying to judge forever the amount of ‘limited time’ that governments need to run budget deficits and spend more or less.  And such macro-management of capitalist economies has never been successful.

Actually, there is plenty of evidence that can explain the ups and downs of business investment.  It is not changes in interest rates; and it is not sudden changes in ‘business confidence’, as many mainstream economists argue.  Those are usually the consequence, not the cause of low demand.  The fundamental cause under capitalism is profitability and the movement of corporate profits.  The evidence for that is in abundance.

The US rate of profit on productive capital remains well below where it was in the late 1990s.  It was hardly boosted by the depreciation of assets in the 2008-9 recession.

And this applies to the current real GDP growth in the US.  Growth is much lower than Trump hoped for because businesses have not invested productively but used the extra cash from tax cuts to pay larger dividends to shareholders; or buy back their own shares to boost the price; or to shift profits abroad into tax havens.  They have not invested as much in new structures, equipment etc in the US because the profitability of such investments is still too low historically; and especially relative to investment in the ‘fictitious capital’ of the stock and bond markets, where prices have reached all-time highs. 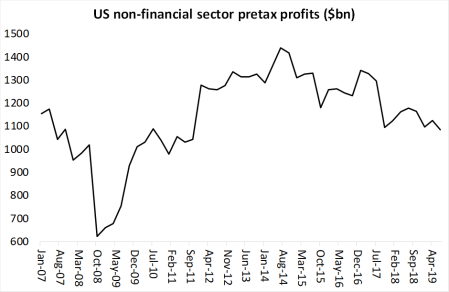 The bulk of productive investment decisions remain in the hands of big business.  Out of the 20% of US GDP in investment, only 3% is public investment and much of that is military spending.  Until that ratio is reversed, “relentless Keynesian” fiscal spending will no more boost growth than ‘trickle-down’ economics.  Only a good, deep recession can restore profitability by sharply reducing the costs of fixed assets and new investments for those businesses that survive.

With regard to climate change, this is an aspect which is gladly ignored. Tim Radford, a founding editor of Climate News Network, worked for The Guardian for 32 years, for most of that time as […]

Ann Pettifor – Is it unreasonable to blame bankers/rentiers for the rise in populism?

According to Pettifor Global bankers and financiers are to blame for the rise of populist and fascist political parties after the Great Financial Crisis and are already leading us to the next financial disaster. Ann […]