WORK is one of the areas of life that has been most obviously and profoundly re-shaped by the pandemic. We have experienced an unprecedented global experiment in working from home, one that employers are treating as a “living laboratory for a permanent – and highly profitable – no-touch future,” as Naomi Klein has argued.

Mathew Lawrence is founder and director of UK think-tank Common Wealth and a former senior research fellow at the IPPR. He is co-author of ‘Beyond Barbarism: A manifesto for a planet on fire’, which will be published in 2021 by Verso books. In July, Lawrence co-authored CommonWealth paper ‘Data and the future of work’ with Hettie O’Brien, the assitant opinion editor at the Guardian. Writing for The Gig Economy Project, Lawrence introduces the key themes of the paper. 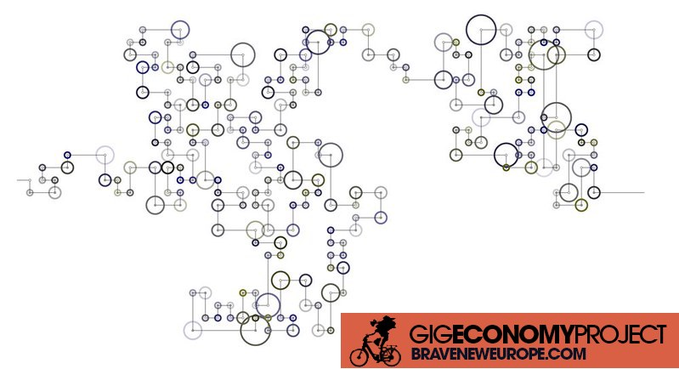 What could this future look like? It’s one where our every action is trackable and traceable, with bosses monitoring our keystrokes and GPS co-ordinates, and where gig work rebranded as “self-employment” becomes normalised.

We have already seen digital platform giants like Google and Apple capitalise on the crisis to leverage access to public data under the auspices of tackling a deadly threat, which it can then extract and utilise in various ways to extend its own IP monopoly power. Far from being weakened by the pandemic, these platform have consolidated their vice-like grip on data.

Digital platforms have deepened long-standing shifts towards outsourcing and the weakening of labour protections, while also allowing for the deployment of new technologies to monitor worker output. This is changing work at a rapid pace: 11 per cent have already earned an income from digital labour platforms in the UK, and by 2025 that is estimated to rise to one-third. A new platform is currently being proposed for the NHS where nurses would bid for shifts, rather than receive more stable contracts.

Just as Thomas Piketty argued that falling inequality in the post-war period was an aberration in the longer history of inequality, we may find that employment in the long twentieth century was an exception, with 21st century work increasingly akin to the piece-work, craft-work, and self-employment of the 19th century.

In exploring data and work, we need to think in terms of power: as trade union researcher Victor Figueroa has argued, the ability to collect, monitor and manipulate all and every form of data “threatens to massively boost the already overwhelming power of employers in the workplace”. But there is nothing pre-ordained about corporate algorithmic control; that is a social determination, not a technological one.

It is possible to imagine a future where power relations are somewhat different: where data is collected and stewarded in common based on consent, where the purpose of technologies is democratically discussed and their limits collectively agreed upon, and where workers use data to build shared power and solidarity.

The report makes a series of specific policy proposals for how to tackle issues around data and work, based on three foundational principles:

1) That we must overcome power imbalances through a new deal for work.

2) That we need to tackle the background inequalities which under-pin the platform economy.

3) That the company is re-shaped as a social institution, where democratic rights within the firm are re-allocated.

While the paper’s proposals are levelled at the UK level, the majority of the measures proposed are equally applicable elsewhere in Europe, where similar challenges apply. We have drawn on DIEM25’s proposals for “technological sovereignty”, and a European Parliament paper proposing a governance framework for algorithmic accountability and transparency in developing our own proposals. We have proposed a new ILO instrument setting out minimum rights and protections for platform workers internationally. The platform giants are transnational, so we need a symmetric response from activists, organisers and progressive think-tanks.

Ian Greener – Why Basic Income may not be the Answer

Two major problems with Universal Basic Income Ian Greener is Professor of Social Policy at the University of Strathclyde, Glasgow Cross-posted from the website of the Social Policy Association There is groundswell of support in […]

ICCT – A no-regrets option: What discussions in the European Parliament spotlight about a light-duty 2025–2030 CO2 standard for the EU