The Long Depression has become a fantasy world of rising financial asset prices, low investment and productivity growth, where nearly everybody can get a job (working part-time, temporary or self-employed), but not a living.

This week, the US Federal Reserve Bank decided to stop raising its policy interest rate for the rest of 2019.  The Fed started hiking rates from near zero back in late 2016 on the grounds that the Long Depression (in economic growth, investment and employment in the US and in other major economies) was over.  As economies reached full employment and used up excess capacity in industry, wages rises and price inflation would accelerate, so it would be necessary to curb any ‘overheating’ with higher interest rates to slow borrowing and spending.  This policy of ‘normalisation’, as it is called, seemed to be justified after the Trump tax cuts were introduced in late 2017. Those measures led to a sharp rise in after-tax profits for US corporations and an apparent pick-up in US real GDP growth, reaching a 3% yoy rate at the end of 2018.  All looked well.

So now the Fed is stopping its rate hiking and also ending its monetary tightening policy of running down its huge holdings of government bonds that it had built up as part of the ‘quantitative easing’ programme, launched in the Great Recession to save the banks and provide cheap money for investment.

What is happening?  Well, it always was a risk that hiking interest rates when economic growth and investment were weak would cause a stock market collapse and a new economic slump.  Now with US economic growth in the current quarter to the end of March likely to be no more than at a 1.5% annual rate and the Eurozone, the UK and Japan slipping back towards outright recession, the Fed has taken fright and put its normalisation policy into cold storage. So the Long Depression is not over after all.

The most startling difference, however, between the Long Depression and the Great Depression of the 1930s is that, in the last decade in the major economies, the official unemployment rate has dropped back to near record lows (in the US, UK, Japan).

And yet inflation has not spiralled upwards at all.  The trade-off between low unemployment and high inflation (as shown by the so-called Phillips curve), is a hallmark prediction of Keynesian aggregate demand theory. But it has not materialised.  The Phillips curve (ratio of the unemployment rate to the inflation rate) is nearly flat in most capitalist economies – there is little trade-off. 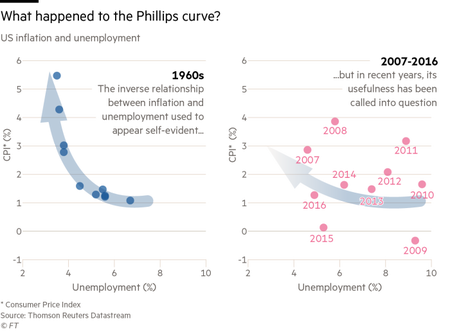 This is confounding mainstream economic thought and the policies of central banks, as I outlined in my previous post. “I don’t feel we have convincingly achieved our 2% mandate in a symmetrical way,” said Fed chair Jay Powell. “It’s one of the major challenges of our time, to have downward pressure on inflation”.

What seems to have happened is that, in the wake of the Great Recession, in an environment of low profitability on capital in most major economies, companies have opted to take on more labour rather than invest.  The new labour entrants are being employed in low-wage occupations, and/or on temporary and part-time contracts.

For example, there are 17% of American workers only employed part-time, one-third more than in the 1960s.  The US official unemployment rate may be down but that is partly because many Americans of working age have disappeared from the labour market: to study, work informally or just live at home with the family.

And there has been a rise in self-employment – in the so-called ‘gig economy’. So, while skilled workers (in short supply) have begun to experience wage rises, the bulk of the non-management workforce in the US, the UK, Japan and Europe instead have seen significant periods of falling real earnings. While the average real GDP growth rate per person in the US has been about 1.5% since 2009, average hourly real earnings for most US workers have risen only 0.8% a year. 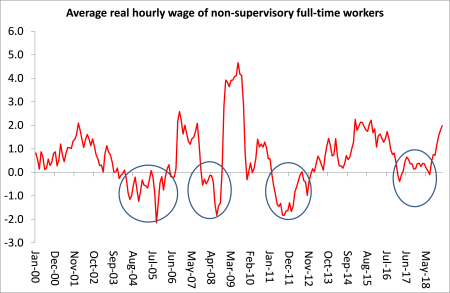 Thus there has been no ‘wage-push’ inflation and average real incomes have stagnated.  The capitalist sector has not increased investment in new machinery, plant or technology to a level that would lead to replacing labour or boosting the productivity of the existing workforce.  Whereas in the Great Depression of the 1930s, unemployment remained high up to the start of WW2 while productivity rose sharply; the opposite is the case in this Long Depression.

The latest estimate of global capital investment made by JP Morgan economists suggests that investment orders are falling and imports of capital goods have moved into negative territory.

In contrast, the US stock market heads back to new highs. We are now in an economic world where there appears to be a sort of ‘full employment’, but stagnant real wages (for most), low interest rates and inflation and above all low productive investment. Meanwhile corporate debt is rising fast globally as major companies issue bonds at low rates of interest in order to buy back their own shares and thus boost the company’s stock price and continue the party.

The Long Depression has become a fantasy world of rising financial asset prices, low investment and productivity growth, where nearly everybody can get a job (working part-time, temporary or self-employed), but not a living.

It was German Chancellor Angela Merkel who explained government spending in very simple terms for her very simple people: “You should have just asked the Swabian housefrau. She would have told us a wisdom of […]

Are governments listening? Karl Nesh/Shutterstock? Rebecca Willis, Lancaster University If targets were enough to beat the climate crisis, we would have cause for celebration. The UK, Norway, Sweden and France have written a target of […]

Rail privatisation has failed to deliver better value services, capital investment, and reductions in public subsidies. Despite this successive rail reforms have been unable or unwilling to renationalise the railway network and address the underlying […]