The pandemic-induced crisis has seen fiscal policy relaxed. Ill-evidenced orthodoxy must not be allowed to reinstate austerity. Economists Carmen M. Reinhart, Kenneth S. Rogoff, whose botched excel tables “proved” that a public debt ratio above 90 percent of GDP was not sustainable, resulting in austerity and so much misery for millions of people. The Japanese Finance Ministry was very impressed.

Few economic studies have had as big an impact on the lives of millions as ‘Growth in a time of debt’, published in 2010 by Carmen Reinhart and Kenneth Rogoff. The two professors’ paper came to the conclusion, drawing on historical data series on government debt and economic growth, that a ratio of public debt to GDP of more than 90% was associated with significantly reduced growth rates. This invited a causal interpretation: high public debt/GDP ratios are bad for growth. It was not long before this had a political impact. Especially in Europe, influential policy makers referred to Reinhart and Rogoff to argue for strict austerity.

‘Serious empirical research has shown that at such high levels, public debt acts as a permanent drag on growth,’ said Olli Rehn, then European Commissioner for the economy. In the United Kingdom, the finance minister, George Osborne, declared: ‘As Reinhart and Rogoff demonstrate convincingly, all financial crises ultimately have their origins in one thing’ – high public debt. And in the United States, the influential congressman Paul Ryan trumpeted: ‘A well-known study completed by economists Ken Rogoff and Carmen Reinhart confirms a common-sense conclusion. The study found conclusive empirical evidence that gross debt … exceeding 90 percent of the economy has a significant negative effect on economic growth.’

Reinhart and Rogoff quickly came under criticism, however. A postgraduate student, Thomas Herndon, showed that their results were biased by selective choice of data, coding errors in the Excel file containing them and unconventional decisions in weighting the summary statistics. After making corrections, Herndon and two co-authors found that Reinhart and Rogoff’s data no longer associated debt/GDP ratios of more than 90% consistently with lower GDP growth – there was no ‘magic threshold’ beyond which growth fell sharply, as the figure below shows.

Herndon’s criticism was widely reported, instigating a debate to which Reinhart and Rogoff were obliged to respond. During the intervening decade, many groups of researchers have used the (corrected) data, as well as their own data sets, to conduct extensive empirical tests of the hypothesis. 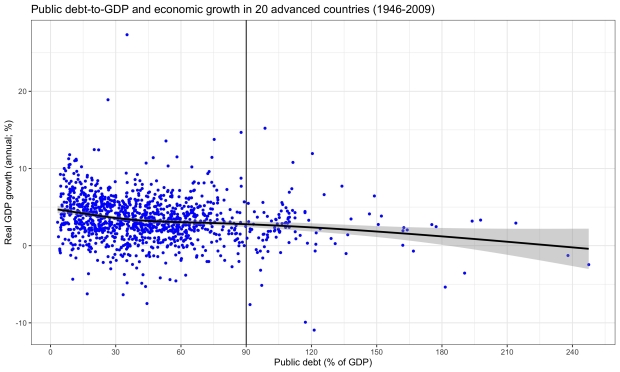 Source: Reinhart-Rogoff (2010) data as used in Herndon et al. (2013). The regression line is based on a generalised additive model with local smoothing.

So, what is correct? And why do different studies sometimes report contradictory results?

In a new paper, I present a quantitative synthesis of the empirical literature on the impact of higher government debt/GDP ratios on growth, using the tools of meta-analysis. The basic idea is to compile all relevant estimates from the literature and make them directly comparable. Different data and modelling choices are taken into account.

The debate on public debt, growth and the appropriate fiscal stance will gain momentum after the COVID-19 crisis. In that context, European decision makers should avoid repeating the mistakes of the recent past.

Lowering public debt ratios through austerity ‘at any cost’ would backfire – as we should know from the experience of the crisis in the euro area. Austerity policies at that time undermined recovery in large parts of Europe and thereby did not allow several countries to reduce their crisis-induced debt peaks. An excessive political focus on reducing public debt can thus be counterproductive in terms of debt sustainability.

The lack of robust evidence of a consistently negative effect of high debt/GDP ratios does not imply, however, that countries are able to sustain any level of public debt. Governments may still be confronted with (country-specific) unsustainable debt, in particular if interest payments increase strongly.

At higher government debt levels, there is a greater risk that governments are pushed into a bad situation, where panic-induced selling of government bonds by investors pushes up required yields. This is especially true in the euro area when, as during the crisis a decade ago, there are doubts about whether the European Central Bank will backstop government bond markets.

This suggests, though, that a government’s ability and willingness to use fiscal policy properly depends more on monetary policy arrangements and the structure of public debt than on its actual level. In the euro area, individual member countries de facto do not have control over the currency in which they issue debt, which makes them more vulnerable to experiencing rollover crises. Therefore, the ECB will need to continue to credibly signal that it will provide a backstop to government bond markets for all member countries to avoid self-fulfilling panic sell-offs of government bonds that strongly increase yields in the future.

Emerging-market economies that hold a large share of debt denominated in foreign currency will generally find it more difficult to sustain higher public debt levels after the COVID-19 crisis than advanced economies issuing debt in their own currency. However, there will still be important differences across countries in both groups, given varying institutional, economic and political backgrounds.

Does it matter significantly for future growth rates if euro area country A has a debt/GDP ratio of 100% after the COVID-19 crisis, while in country B it is only 70%? My results suggest this is not the case – and thus there is no general urgency to reduce debt ratios across the board. A careful reading of the empirical evidence calls for caution about one-size-fits-all austerity prescriptions in response to increased public debt. Further strengthening the crisis resilience of the institutional structure in Europe (e.g. by completing banking union) could help in avoiding unfavourable outcomes on government bond markets.

Europe’s policy makers, and also many economists, should reconsider their recent fixation on negative-growth implications of increased debt ratios – and avoid reviving it in the aftermath of the pandemic.

A short, but good take on what trade agreements are really about. Dean Baker is a Senior Economist at the Center for Economic and Policy Research (CEPR) Cross-posted from Dean Baker’s Beat The Press Blog […]

This is our second article concerning last week’s election in Hungary. In the first article by Zoltán Pogátsa, “Hungary’s Crisis is of the Left, not the Right“, the author analysed the domestic political situation in […]