Someone eventually had to  eventually confirm that the emperor was not wearing any clothes. 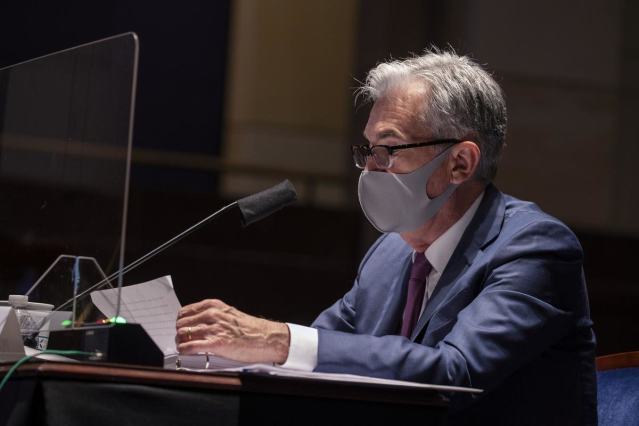 At the Kansas City Fed Jackson Hole symposium, the annual jamboree ‘think-tank’ for international central bankers, US Federal Reserve Chair Jay Powell announced the end of monetary policy as a tool to control inflation.  His speech of just a few minutes completely dropped the monetarist theory of inflation as proposed by Chicago free market economist Milton Friedman and pursued by his disciple and former Fed chief, Ben Bernanke. Powell also made it obvious that the Keynesian argument for inflation, namely as trade-off for full employment and rising wages, as graphically presented in the so-called Phillips curve, was also dead.

Powell noted that “over the years, forecasts from FOMC participants and private-sector analysts routinely showed a return to 2 percent inflation, but these forecasts were never realized on a sustained basis.”

And more recently, despite falling and record low unemployment (before the pandemic), the inflation rate continued to fall.  “The muted responsiveness of inflation to labour market tightness, which we refer to as the flattening of the Phillips curve, also contributed to low inflation outcomes….. the historically strong labour market did not trigger a significant rise in inflation.”

Why does it matter if inflation is falling and is below the Fed’s 2% a year target?  Powell explained: “Many find it counterintuitive that the Fed would want to push up inflation. After all, low and stable inflation is essential for a well-functioning economy.  However, inflation that is persistently too low can pose serious risks to the economy. Inflation that runs below its desired level can lead to an unwelcome fall in longer-term inflation expectations, which, in turn, can pull actual inflation even lower, resulting in an adverse cycle of ever-lower inflation and inflation expectations.”

What’s wrong with that?  After all, working people would be very happy if there was no inflation to cut into the purchasing power of their wages.  But the objective of the Fed is not to stop inflation hitting wages. The objective is to have some inflation, because without it “we would have less scope to cut interest rates to boost employment during an economic downturn, further diminishing our capacity to stabilize the economy through cutting interest rates.”  So low inflation means low interest rates and no room for monetary policy to cut rates further to “boost employment” or “stabilise the economy”.  In other words, monetary policy (changing the Fed policy rate and/or injecting quantities of money into banks) would no longer work.

Indeed, the reality of the last ten years since the Great Recession is that cutting interest rates to zero and applying quantitative easing (which has taken the Fed balance sheet to record highs) has done little or nothing to boost economic growth or the productivity of labour.  As Powell said in his Jackson Hole speech: “assessments of the potential, or longer-run, growth rate of the economy have declined. For example, since January 2012, the median estimate of potential growth from FOMC participants has fallen from 2.5 percent to 1.8 percent”.  So monetary policy has failed the productive part of the economy. The prices of financial assets and property have rocketed, on the other hand.

So what has Powell decided to do to justify his job?  “Our new statement indicates that we will seek to achieve inflation that averages 2 percent over time. Therefore, following periods when inflation has been running below 2 percent, appropriate monetary policy will likely aim to achieve inflation moderately above 2 percent for some time.”  The target of 2% a year has been abandoned in favour of some vague ‘average rate over time’. In other words, the Fed will sit on its hands and do nothing.

The stock market loved this because the rich-investing public (hedge funds, banks, insurance companies and pension funds) can now expect the cost of borrowing to speculate to be near zero for the foreseeable future.  But the Fed and mainstream economics provide no explanation of why inflation has slowed and so there is no guarantee that it won’t return in the future.

What are the mainstream explanations of low inflation in the last 30-40 years?  Powell commented that “some slowing in growth relative to earlier decades was to be expected, reflecting slowing population growth and the ageing of the population. More troubling has been the decline in productivity growth, which is the primary driver of improving living standards over time.” It seems that inflation is not “purely a monetary phenomenon” (Friedman), but instead is “driven by fundamental factors in the economy, including demographics and productivity growth— the same factors that drive potential economic growth.”

At the symposium, some mainstream economists attempted to offer an explanation for why US productivity growth has been so weak, thus keeping real GDP growth low and, with it, inflation.  One Chicago University economist (the home of Friedman and free market economics) argued that productivity growth was low because of “slowing business dynamism”.  Businesses were not innovating but had become lazy and just taking the money.  Why?  Because of the decline in ‘free competition” and the rise of monopolies. Market concentration had risen and average profit markups increased. The productivity gap between frontier and laggard firms had widened and the share of young ‘innovative’ firms had declined.

This is the argument of ‘market power’, popular among left economists as well, it seems, as among right-wing free market economists. It is ironic that usually the argument is that inflation is caused by monopolies using ‘pricing power’. Now the argument is reversed: monopolies slow productivity growth and so inflation slows.  So low productivity and stagnation is the fault of monopoly power.  The free market policy is to break up monopolies and return to (the myth) of ‘free competition’. The leftist policy is pretty much the same, or sometimes more radically, to call for the public ownership of these monopolies.

But is the problem of low growth in productivity down to ‘market power’?  I have presented several arguments against this explanation in previous posts.

The other explanation offered for low growth in real GDP, productivity and inflation is falling population. Jay Powell referred to an ageing population that spends less, thus keeping prices low.  And one economist at the Jackson Hole symposium argued that old people are less likely to want to use innovation, so businesses will invent less.

Does not sound very convincing does it?

A much better explanation can be found using Marx’s value theory.  In a previous post, I have spelt out a theory based on value creation. If new value created by labour power (divided into profits and wages) accelerates, purchasing power will accelerate and so will inflation of goods and services over time – and if new value growth slows, so will inflation.

The very latest corporate profit figures for the US economy provide strong support for the view that slowing productivity and inflation is driven by slowing profits and thus falling profitability of capital.  The US rate of profit peaked in the late 1990s and has not recovered from a 30-year low in the Great Recession.  And now the rate of profit in 2020 could end up at levels not seen since the deep slump of the early 1980s (and perhaps even lower).

US non-financial sector corporate profits have been falling since 2014, and now in the pandemic lockdown, have dropped another 20%-plus, to reach levels not seen since the depths of the Great Recession.

No wonder monetary policy has failed to restore economic growth, even to rates achieved before the Great Recession, let alone back to the years of the Golden Age of the 1960s.  Low inflation may be a product of ‘slowing business dynamism’, but that in turn is a product of slowing investment in productive assets because of low and falling profitability.

Strike is into its eleventh day and has spread to Chesterfield, Sunderland, and Huddersfield* BRAVE NEW EUROPE has donated to the strike fund. If you wish to support the Stuart workers of the IWGB donate […]