We continue our series on world economics due to the importance of  current developments.

Financial markets globally continue to gyrate on any news about the trade war between the US and China.  When President Trump announced that the Chinese had called him during the G7 summit meeting in Biarritz to agree on talks on a trade deal, the stock markets rose.  Within hours after China said no such call had been made and this was just another Trump ‘fake news’, markets reversed and went down again.

Clearly what happens in the ongoing trade battle has become a trigger point for a stock market collapse and a massive switch into ‘safe haven’ government bonds and gold.  But it is more than that.  Global growth has been slowing and corporate investment has dropped off sharply.  This is driven by a fall in corporate profits, a profits recession.

Take the earnings results of the top 500 companies by stock market value in the US, S&P-500.  With nearly all results in for the second quarter of 2019 ending in June, total earnings (profits) are up only 0.5% and sales revenues up only 4.7%.  After taking into account current inflation, real earnings were negative and revenues barely positive.  And that’s for the top 500 companies.

For the smaller companies, the situation is even worse.  Earnings are down over 10% from last year and revenues up only 2.2%, or flat after inflation.  Excluding the finance sector, earnings would be down 21%.  A sector analysis shows that the retail sector did best as the American consumer went on spending, along with the finance sector.  But productive sectors like technology saw a 6.3% fall in profits.  And that is key. 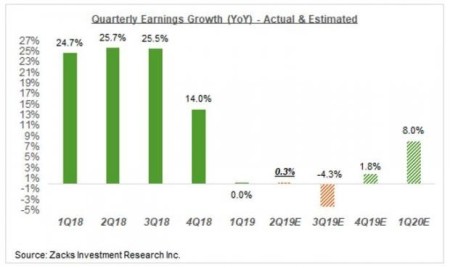 Everywhere, domestic production is dropping back.  The usual answer is to sell more overseas through exports.  But here the world trade picture is looking bleak.  The Dutch database company CPB provides monthly world trade figures.  And in June, world trade fell by 1.4% over May and compared to June 2018.  Indeed, world trade has fallen since October 2018 by 3.5%.

And now we have the trade war, which is intensifying.  Only last week, China announced that it was imposing tariffs on US imports in retaliation for the planned September tariffs on Chinese imports into the US already announced by Trump.  Trump promptly announced further tariff hikes in response.

JP Morgan economists now reckon that direct effect of these tariff measures on China’s growth, already slowing, would be to knock 0.2% of the growth rate and deliver a permanent loss of 0.5% of China’s GDP.  The extra hikes threatened by Trump would drive that loss up to 0.9%.  US growth also would take a hit, to the tune of about 0.25% to 0.5% in permanent loss of GDP.  Even more worrying is that uncertainty about how far this war is going, is making businesses, already suffering from slowing or falling profits, as we have seen, even more unwilling to make new investments.

Global investment growth is already down to just 1% a year, according to JPM.  If investment should go negative globally in the next few quarters, then global real GDP growth, currently around 2.5% a year (depending on how you measure it), would drop towards zero – in other words, a global recession.

There is a third approach, however, proposed by Yale philosopher Thomas Pogge. Pogge argues that the morally relevant metric of progress against poverty is neither absolute numbers nor proportions, but rather the extent of global […]

No. There are a number of misconceptions of how state finances function. In this piece Ann Pettifor adresses one of these: why taxes are not used for spending. Ann Pettifor – Economist, director of Policy […]

Alberto Bradanini – The European Union Leviathan and its Attack on Democracy

Another wake-up call concerning the devastation being caused by the European Union on the people of Europe Alberto Bradanini is a former Italian diplomat. Among many positions, he was Ambassador of Italy to Tehran (2008-2012) […]