When robots constitute a perfect substitute for labour, workers and robots compete directly on the labour market, holding wages down. As a consequence, automation leads to a declining labour income share. 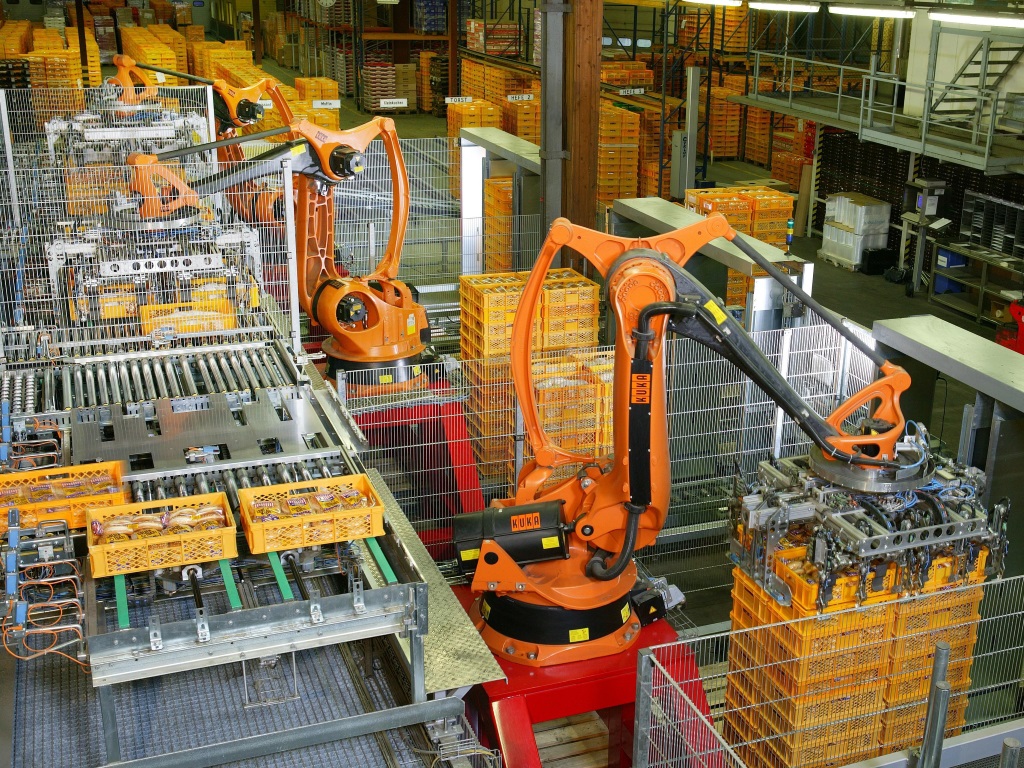 The pandemic has opened up a Pandora’s box about the future of work.  The slump has caused a huge loss of jobs, hours and earnings, particularly for those who are in all sorts of service sectors, like retail, entertainment, leisure, events, food preparation etc and it is driving thousands of small businesses surviving on small margins and with large debt burdens to the wall.

But it is more than that.  The slump will and is providing an opportunity for companies, particularly large ones, to do away with substantial parts of their labour force and replace them with machines, robots, home working connectivity and algorithms.  The result is that there will be further concentration of companies in sectors, as larger companies devour the markets of the smaller.  Of course, this is no new phenomenon but is part and parcel of slumps under capitalism. Friedrich Engels detected this process as long ago as in the 1840s in industrial England: “The former lower strata of the middleclass – the small tradespeople, shopkeepers, the retired, the handicraftsmen and peasants – all these sink gradually into the proletariat, partly because their diminutive capital does not sufﬁce for the scale on which modern industry is carried on, and is swamped in the competition with the large capitalists, partly because their specialized skill is rendered worthless by new methods of production”.

The much talked about automation revolution is likely to take off, at least in some important growth sectors.  Under capitalism, the production for profit system, this will not mean fewer working hours for employees; more interesting work rather than basic toil; or rising incomes.  On the contrary, the automation revolution under capitalism will aim to reduce the workforce, increase hours for those still employed and keep wages from rising – all in order to raise the profitability of the most efficient at the expense of the least efficient.

There are many forecasts of the loss of jobs as robots replace workers.  Management consultants, McKinsey, forecast that automation could displace 53 million positions on the European continent alone by 2030, the equivalent of about 20% of the current workforce.  The biggest reductions in jobs will be retailing, manufacturing and food and accommodation services.  And those hit the most will be those who have the least ‘skills’ and are paid the least.

Again, there is nothing new in the story of labour being replaced by machines.  It is the essence of industrial capitalism.  The so-called ‘industrial revolution’ of the early 19th century saw millions of craftsmen and skilled artisans replaced by machines.  Real wages were stagnant or even fell as craftsmen’s incomes vanished and the gains of the new industries went to their owners. Engels noted this result in his brilliant book, The condition of the working class in England (1844).  The machine-owning industrialists grew “rich on the misery of the mass of wage earners”.  Now the pandemic slump is creating the conditions for the wiping out of jobs across the board as happened in that period after the slump of the third decade of the 1800s.  The third decade of this century could see the same.

In his book Engels noted that mechanisation led to a fall in the labour share of national income to fall, even if some workers gained employment in new industries as old ones died.  This process will be repeated in this post-pandemic decade.  Already, in the US, the wages for prime-aged men with no more than a high-school diploma have declined since 1980 and labour force participation rates among men aged 25 to 55 have fallen in tandem. Part of the reason was a switch to cheaper female labour and shifting of manufacturing industry out of the advanced capitalist economies to the ‘global south’ to use even cheaper labour with modern plants.  Again, Engels noted that trend in 1840s industrialising England: “the more modern industry becomes developed, the more is the labour of men superseded by that of women and children… Differences of age and sex have no longer any distinctive social validity for the working class. All are instruments of labour, more or less expensive to use, according to their age and sex.”

But labour-replacing technological change was also major reason. Estimates show that each multipurpose robot has replaced about 3.3 jobs in the US economy and reduced real wages.  And forecasts for robot expansion in the 2020s predict exponential growth. The number of industrial robots has already increased by factor of three over the course of the last decade, rising from a little over one million operative units in 2010 to a projected 3.15 million units in 2020. Over the same time, robots reportedly became capable of substituting for, or even outperforming, humans for many tasks, such as producing customised parts and medical implants using 3D printing technologies, diagnosing diseases, and assisting decision making, for example, by ‘robot judges’.

The rise of the robots: robots million units

When robots constitute a perfect substitute for labour, workers and robots compete directly on the labour market, holding wages down. As a consequence, automation leads to a declining labour income share. In the US, the labour income share within the productive sectors fell during the 1970s as companies tried to compensate for falling profitability by reducing their workforces, enabled by two huge slumps in 1974-5 and 1908-2.  The labour share stabilised during 1980s and 1990s at a lower level as corporate profitability improved somewhat in the neoliberal period.  Clearly, there were other factors than mechanisation that led to a fall in labour’s share (the destruction of the trade unions, wage freezes etc), but it is estimated that of the 3% fall in the labour share from the 1990s to 2010, about 1% point can be laid at the door of automation.

But as Engels also noted, mechanisation works both ways.  On the one hand, the introduction of new machinery or technology will lead to the loss of jobs for those workers using outdated technology.  On the other hand, the new industries and techniques could create new jobs.  But it is only in sectors of industry that require high skill and/or are subject to union protection that increasing wages and jobs are sustained: “The so-called ﬁne spinners…do receive high wages, thirty to forty shillings a week, because they have a powerful association for keeping wages up, and their craft requires long training; but the coarse spinners who have to compete against self-actors (which are not as yet adapted for ﬁne spinning), and whose association was broken down by the introduction of these machines, receive very low wages” (Engels).  Generally, however, “that wages in general have been reduced by the improvement of machinery is the unanimous testimony of the operatives. The bourgeois assertion that the condition of the working-class has been improved by machinery is most vigorously proclaimed a falsehood in every meeting of working-men in the factory districts.”

Mechanisation, robots and automation will reduce labour time. That should mean fewer working hours as more use values are created by labour in less time. But under capitalism, the extra use-values only deliver more value through the sale of those use-values and that value is only paid out to workers either in fewer hours, higher wages or both through a class struggle between the owners of capital and the labour force.  So, under capitalism, mechanisation does not ‘automatically’ lead to fewer hours and less toil.

In a new book, Work: a history of how we spend our time, James Suzman explains that, contrary to hopes and predictions of such as Adam Smith or John Maynard Keynes, technology does not deliver a “happy life” (Smith) or “abundant leisure” (Keynes). As the recently deceased (and missed) David Graeber showed, mechanisation under capitalism has actually led to more ’bullshit jobs’ that destroy creativity and meaningful work, while increasing toil.

As the pollster Gallup showed in a recent survey of working life in 155 countries published in 2017, only one in 10 western Europeans described themselves as ‘engaged’ by their jobs. In another survey conducted by YouGov in 2015, 37 per cent of working British adults said their jobs were not making any meaningful contribution to the world.

It’s true that average working hours in most advanced capitalist economies have fallen since Engels’ time, but that has not been because of mechanisation, so much as from trade union struggle and political battles over factory legislation and on the reducing working day etc.  Indeed, since the trade unions were decimated in the late 20th century in most countries, there has been little reduction in the average working week (still hovering at about 40 hours) despite the acceleration of robots and automation.

When trade unions in Finland recently proposed a 6 hour day, verbally backed by the Finnish prime minister, the idea was shunted off to a committee because of “resistance from employers, who have an interest in paying (as little as possible) for hours worked, not according to productivity. A six-hour day for eight hours’ pay means a higher hourly wage. It also means a loss of control over workers — not only in terms of a smaller chunk of each day where employers control the activities of employees, but also through the implicit acknowledgment that workers should have more of a say in organizing working life.” Keynes’ dream nearly 100 years ago of a 15-hour week is still just that – a dream.

The pandemic slump looks like being a new catalyst for a change in working conditions.  ‘Working from home’ is the new cry. But that will only apply to a minority, mostly those in better paid office-based work.

And there is no surety that ‘working from home’ will improve job satisfaction or make people ‘happier’ as Adam Smith hoped.  Already employers are developing new methods of monitoring staff in their homes and indeed ensuring that they work even longer hours as they no longer commute.  And for the vast majority, going out to work in jobs that offer no creativity, pay badly and are increasingly insecure will remain the norm.  More toil not less work.

Heiner Flassbeck – Italy: A Choice in Emilia Romagna – or How the EU is Constantly Dismantling Itself

Salvini will carry on, enormously strengthened, and sooner or later he will reach his goal. Heiner Flassbeck is an economist, as well as publisher and editor of  “flassbeck economics international” Originally posted in German at […]

Drawing on a new book on the events of 2020-21, William Davies, Sahil Jai Dutta, Nick Taylor, and Martina Tazzioli offer a critical account of COVID-19 as a political-economic rupture, exposing underlying power struggles and social injustices. […]