German and EU hypocrisy 2.0 to secure fossil fuels they are siding with a militarily aggressive dictator.

Narek Sukiasyan is a PhD candidate in political science, project co-ordinator at the Friedrich Ebert Foundation Armenia and lecturer in regional policy at Yerevan State University. 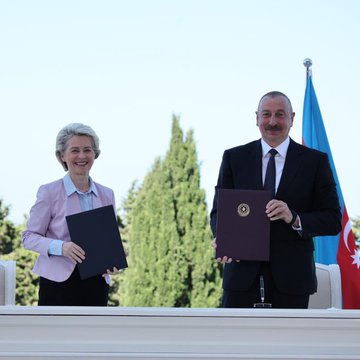 At midnight on Tuesday Azerbaijan launched the largest attack on the Republic of Armenia (unrelated to the line of contact of Nagorno Karabakh) in the entire history of the conflict between these two countries. Few Armenian cities and more than a dozen villages came under heavy artillery fire and UAVs, causing, as of midday, 49 deaths, heavy injuries, and tens of destroyed houses and infrastructure. Meanwhile, Azerbaijani special forces attacked military positions on the ground and occupied new posts inside Armenia granting them better oversight if not total control over Armenia’s strategic communications connecting to the southern part of the country – Karabakh and Iran. 3 civilians were heavily injured, an ambulance has been targeted and schools in bordering regions have been shut down.

Thus far international reactions have been limited. Armenia has triggered security guarantees from Russia as well as the CSTO. The Russian Foreign Ministry announced a reached truce to be implemented by 9 am, and yet the Azerbaijani offensive continues with infantry incursions and artillery shelling. The CSTO failed to respond adequately, and its intervention will be limited to sending a fact-finding mission and establishing of a monitoring working group. France will take the issue to the UN Security Council. US State Secretary Anthony Blinken has urged Ilham Aliyev in a phone call to cease hostilities, while the Indian MFA ‘call[ed] upon the aggressor side to immediately cease hostilities’.

Just two weeks ago, the leaders of the countries met in Brussels to discuss the normalisation of relations mediated by the President of the EU Council Charles Michele. Though agreed to speed up negotiations on a peace agreement, the Azerbaijani demands appear deep inside Armenia’s red lines – complete withdrawal of demands for the security of Armenians in Karabakh (let alone status), disarmament of Armenian local forces in Karabakh and provision of sovereign corridors to its exclave Nakhichevan through Armenia’s territory (in fact a direct land connection with Turkey). This offensive aims to blackmail Armenia to accept Baku’s terms, as the tactic of coercive bargaining proved successful in the past, forcing Yerevan to choose between vital concessions or large-scale war.

An offensive of this scale became possible due to a number of external leverages. First, Baku enjoys Turkey’s unequivocal alliance, who is encouraging its regional dominance through military means and through supporting Azerbaijan’s actions during this offensive. Ilham Aliyev is also backed by Brussel who is facing a fossil fuel shortage which resulted in a dependency on Azerbaijan’s supplies. According to the President of the EU Commission, Aliyev is ‘a reliable and trustworthy partner’, regardless of his country’s behaviour or what distinguishes him from other dictators that Europe claims to resist. Lastly, Russia’s failure on the Kharkiv front frees Baku from concerns over Russian involvement, since Moscow struggles with its own supplies, personnel, and planning. Internally, Aliyev might also be motivated by the need to deflect public attention in the face of growing inflation, anti-democratic reforms, and the backdrop of the waning effect of the euphoria of the 2020 victory — rallying around the flag has worked magic for the regime in the past.

How the West can help Armenia

With Armenia’s army still recovering from the blows of the 2020 war, international pressure seems to be the only leverage that could restrain Ilham Aliyev from grabbing chunks of Armenia every few months and diminishing Armenia’s national security pillars by coercing it into endless concessions.

Armenian authorities, since the end of the 2020 war and their pre-election campaign, have announced a peace era agenda, which for many read as defeatist and was criticised for its readiness to concede to Turkish and Azerbaijani demands.

Today, addressing the Parliament, Prime Minister Pashinyan admitted that this policy has not yielded results. Previously when addressing the nation on the anniversary of the country’s independence referendum, the PM said there is no progress in the processes of normalisation with Turkey and Azerbaijan ‘because they demand too much from us, or they think that we are demanding too much from them’. Unable to deflect those demands politically due to a lack of international support or the ability to withstand militarily, Armenia can only plan in the short term to prevent or delay the war.

The trajectory of processes in previous months and this unprecedented attack on Armenia’s territorial integrity shows that the window of opportunity which could address at least some of the security issues in the region and make a step closer to peace is closing. Since the driving force of the security processes between Armenia and Azerbaijan (and by extension Turkey) has been coercive bargaining or straightforward blackmailing, that policy has proven extremely rewarding for Baku and bared 0 costs in form of sanctions, warnings, legal actions, or even condemnations, one can confidently expect it to continue.

Some Azerbaijani media is trying to push a narrative for Western audiences that Azerbaijan is opening up another front against Russia, to gain their support or silence criticism. One should not forget though, that Ilham Aliyev was in Moscow just the day before 24 February to sign a strategic partnership with Vladimir Putin. While Europe might be tempted with an alternative dictatorship with a very questionable energy supplies, through its lack of action, Brussels is siding with the global rise of authoritarianism that belies a ‘rules-based world order’.

Practically, Brussels can restrain Baku by exercising diplomatic consequences for unleashing an unprovoked war by freezing the negotiations on the EU-Azerbaijan strategic partnership, banning military or dual-purpose goods and technologies export to Azerbaijan and Turkey, freezing Aliyev’s dynasty’s European assets, suspending the membership of Azerbaijan in the Eastern Partnership and linking energy cooperation to its relations with Armenia and human rights record. But, as of yet, none of these consequences have followed.

It will be seen if the ruling elite in the US is capable of responding to the reality in their nation. Otherwise this was a poorly executed first try. The second will be better organised. […]

Jan Behringer, Martin Gonzalez Granda, Till van Treeck – Getting Out of the Rat Race: Is an “Age of Leisure and Abundance” Possible?

Keynes promised shorter working hours and greater prosperity by now. As remote as it sounds, that vision is still possible.   Jan Behringer is a unit head at the Macroeconomic Policy Institute in Düsseldorf, Martin Gonzalez […]