On 1 December Jordi Sànchez and Jordi Turull went on hunger strike to protest against the Spanish Constitutional Court blocking their access to European justice. Chris Bambery visited Jordi Cuixart in prison this week.
For further information see “How Spain uses its Constitutional Court to prevent Europe from protecting the rights of Catalonia’s political prisoners”  and “Solidarity with the Catalan political prisoners!” 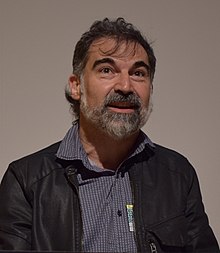 As he entered the visiting room at Lledon prison my first thought was that Jordi Cuixart looked a bit smaller and a bit older than the pictures I had seen of him addressing crowds last autumn in the build up to the Catalan independence referendum.

But as he pointed out he has been held in prison by the Spanish state awaiting trial for one year, one month and 17 days.

The second thing that struck me was that he was smiling, and for an hour during our visit that smile never left his face. The smile is there despite the fact he is facing trial on charges of rebellion and sedition, charges long gone from the statute books elsewhere in Western Europe, and that the Spanish Constitutional Court, with its politically appointed judges, are likely to send him down for 17 years.

Jordi has settled into prison life because he knows his imprisonment, his trial and his sentence gives him an opportunity to cast a light on the democratic deficit within Spain. But he is also looking beyond his own fate: “I want to be released, but that is not the priority. That is to solve the political issue.”

In other words Jordi Cuixart is playing a long game where the ultimate goal is reaching a peaceful solution to the relationship between Catalonia and Spain. Peaceful is important because like all of the movement for Catalan self-determination he is committed to non-violence:

“We are in jail for defending democratic values. We never used violence so there can be no rebellion or sedition. The prosecution say I used the slogan No Passaran, they have no idea of its significance or what it represents in the history of the fight against Franco.”

Jordi has to focus on the trial of himself and the eight other prisoners. You can tell he is up for turning the spotlight of Europe and the world on Spain and its limited democracy. But he is looking beyond that to creating and independent Catalan Republic:

“We are working on building consensus for the next step. 83 per cent of the Catalan people support the prisoners. Many did not or don’t support independence.”

As our visit nears its end we talk about his family. His partner, Txell Bonnett, has been a tenacious champion for his freedom. Despite having an infant son, she has travelled the world explaining Spanish repression in Catalonia.

Their son was a baby when he was placed under preventative detention, first outside Madrid, and since the summer north of Barcelona. He only has physical contact with his family twice a month, other visits are behind a screen.

A huge smile breaks out as he recalls that his son went to sleep in his arms. This was the first time that had happened.

The Spanish state should be afraid of Jordi Cuixart’s humanity, his courage, his determination, and his winning smile.

The euro is not at stake, but the policies that Brussels, with the complicity of national governments, imposed by making the eurozone the area with the lowest growth and the highest unemployment in the developed […]

We shall encounter the same problem with climate change. The rich countries will horde all the new technologies, leaving poor countries to continue their fossil fuel course. Branko Milanović is an economist specialised in development […]