Next week, countries will gather in Katowice, Poland, for the latest round of UN climate negotiations, known as COP24. Their plan is to try to agree on how to implement the 2015 Paris Agreement. However, the Polish Government has invited coal and gas companies to sponsor the talks, giving these dirty energy corporations a platform to greenwash and lobby for false solutions.

It will be the third time that Poland, a country heavily reliant on coal, will host the UN climate talks. This year it’s  the 24th Conference of the Parties under the UN Framework Convention on Climate Change – COP24 – that will be taking place in Katowice. The last time the Polish Government presided over the talks, the conference was also brimming with sponsors from the coal and gas industries. If this COP is a repeat of the one Poland hosted in 2013 (COP19), this bodes ill for the climate.

So extreme was the corporate capture of COP19, over 800 members of civil society walked out of the talks on the penultimate day, chanting “Polluters Talk, We Walk”. Some of the biggest climate culprits had their logos plastered across the conference venue, advertising their climate credentials with little reflection of the reality of their business models. Culprits included steel giant ArcelorMittal, which made billions of profits on the EU carbon market while causing havoc in communities around the world; BMW, which had been lobbying hard against CO2 emissions reductions for cars; Polish oil company Lotos, which had been pushing for fracking, and other big polluters such as Emirates, Opel, and PGE – the largest, state-owned Polish power company and biggest developer of coal power plants in the EU. 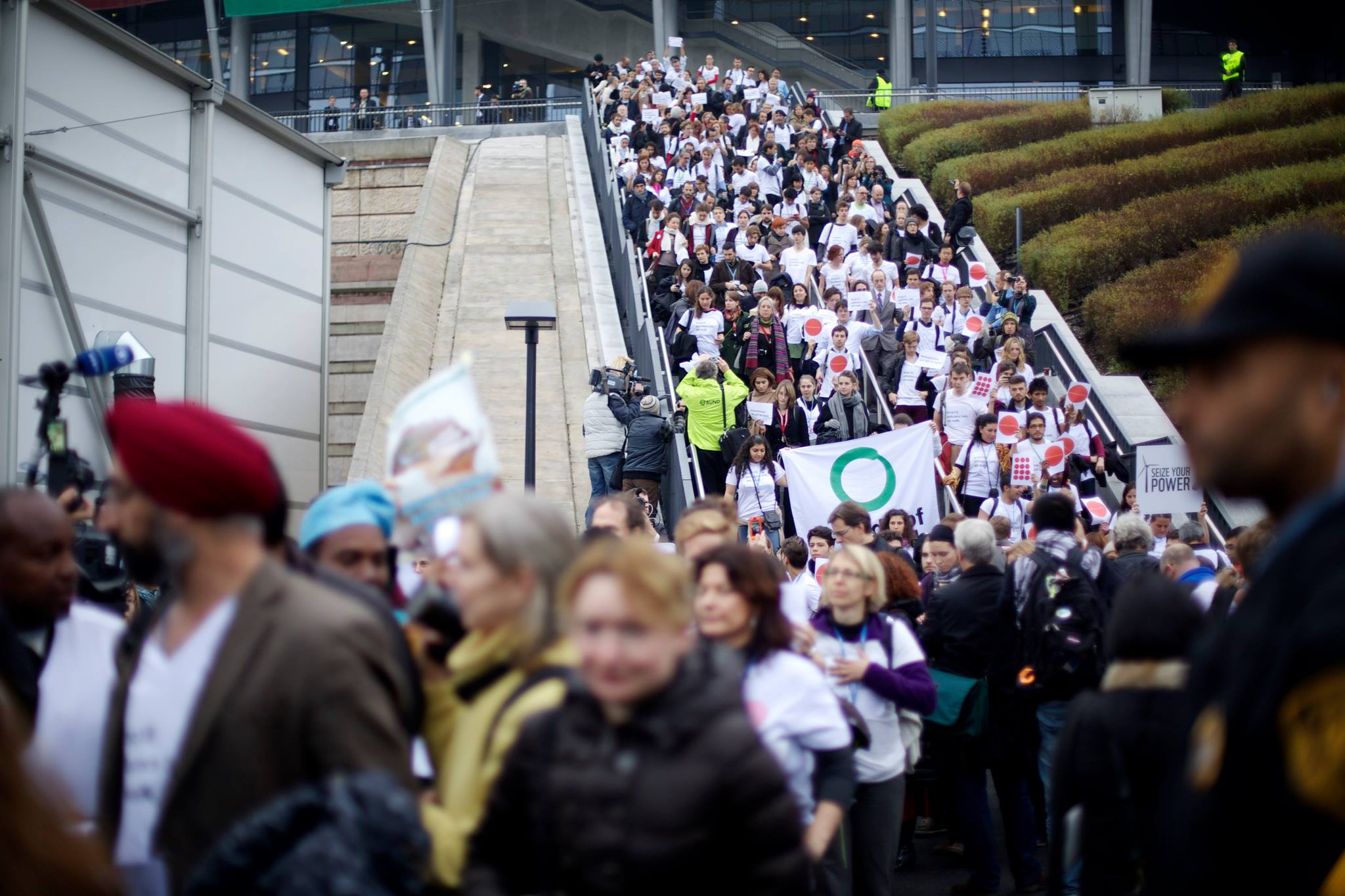 But the event that caused most outrage was the International Coal and Climate Summit, celebrated as an official event in the middle of the talks, which had been organised by trade association and lobby group the World Coal Association along with the Polish Ministry of Economy, and was addressed by UNFCCC executive secretary Christiana Figueres. Despite coal’s status as the dirtiest fossil fuel, leaving it no place in any scenario for a safe climate, Poland’s government co-signed the industry’s plea to the UN to embrace coal as a solution.

COP19 also saw negotiations with business in a pre-COP, co-hosted by the Polish employers group Lewiatan (the national branch of Brussels-based corporate lobby association and notorious climate laggards BusinessEurope) and held some weeks before the official climate talks. The meeting brought together ministers from key countries and representatives of big polluting corporations such as chemicals giant BASF, concrete and cement producer Cemex, and Polish power company PGE. NGOs were banned from attending the event. The debacle was summed up perfectly by the COP19 President, Polish Minister for the Environment Martin Korolek: “For the first time in 19 years, since the climate talks have been held, representatives of global business will be part of it.”

Just as in 2013, fossil fuels look set to take centre stage at COP24. This year’s talks take place in Katowice, a staunch coal-mining region. A government-backed trade union conference this summer made clear its position that the coal industry should be supported and coal treated like all other “energy carriers”, adding that countries should be free to burn their own domestic energy sources (ie coal).

In its public relations efforts, the Polish Government is pushing the story of a successful transition away from coal, in particularly the town of Katowice itself. But Poland still gets 81 per cent of its electricity from coal. The first official sponsor to that was announced for this year’s edition of the UN climate negotiations also happens to be a coal company. And while Poland appears to be taking a less confrontational approach – with no International Coal and Climate Summit scheduled so far – the push for coal is still very evident. Anticipating another coal-coopted COP, Greenpeace have just climbed the cooling tower of the Bełchatów coal plant to demand a move away from coal and a just energy transition.

As with COP19, the media attention may be focused on coal, but there is a general pro-business focus at COP24. This year, the Polish presidency organised a pre-COP in Krakow on 22-23 October with one day earmarked just for business. However, unlike COP19 (and possibly in part because of the 2013 walk-out), a few NGO representatives were apparently allowed to join this day.

Few snippets of that ‘business day’ have been reported on the UNFCCC and COP24 websites, and have neither lessened concerns that the meeting was just another case of privileged access to decision-makers for business, nor that the UNFCCC may endorse weak action by big polluters. The Deputy Executive Secretary of UN Climate Change, Ovais Sarmad, told the corporations at the meeting: “You have all highlighted that economic growth and tackling climate change are compatible. In fact, one leads to the other. Therefore, it is a very encouraging moment. We need to have a just transition to low-carbon.” COP24 President Michal Kurtyka warned against making “requirements unreasonable or too far-reaching” for business – despite the existence of strong scientific evidence that a far-reaching transformation of our energy systems and economies is inevitable to prevent catastrophic global warming. Sarmad and Kurtyka’s words are a slap in the face.

The October 2018 IPCC report makes clear that an increase in global temperatures of 1.5C will have even more dramatic consequences than previously feared, and we may see these as early as 2030. Bold climate policies in the next 12 years are crucial to avoid the worst impacts of food and water scarcity, climate-related poverty, forest fires, eradication of species, and rising sea levels. Tackling climate change is simply not compatible with the pursuit of continued economic growth and timid regulations that prioritise corporate profits.

This year the Polish presidency kept the list of sponsors secret until the last minute. Only this week, the Polish Minister for the Environment, Henryk Kowalczyk, announced the first six sponsors, including no less than three coal corporations (JSW, Tauron, and PGE)! So far, all sponsors are Polish state-owned companies and beyond the coal corporations also include gas company PGnig, insurance company PZU, and PKO Bank.

With the summit in Katowice costing three times the amount of COP19 – close to €60 million – there is no doubt that the government is looking for help to settle the bill. This does not change the fact that Poland’s invitation for sponsorship from these particular companies is scandalous:

The core business of the other two sponsors may not be the extraction or use of fossil fuels, but they are still very connected with the oil and gas industry:

The Polish government inviting this oil and gas club to sponsor COP24 will give these industries airspace and, most likely, privileged access to the talks – at a time when the stakes could not be higher!

If we want to have any chance of keeping the average global temperature rise below 1.5C, as laid out in the Paris Agreement, we need to leave coal, gas and oil in the ground. This is hardly possible when those involved in the process for agreeing climate action are the same polluters which caused the climate crisis in the first place. To kick those who are profting from nearing climate chaos out of the negotiating sphere, we need a firewall between polluters and policy-makers. This is what the World Health Organisation already implemented with regards for the tobacco industry in the UN Framework Convention on Tobacco Control in an attempt to protect public health policy-making from the vested interests of the tobacco industry.

While the Poland-hosted COP24 seems to be going in exactly the wrong direction, the People’s Demands for COP24 are calling for real solutions: keeping fossil fuels in the ground and ending the corporate capture of the climate talks. Whether it is NGOs closely following the talks or grassroots movements increasing the pressure on their governments at home, civil society is working hard to stop the Polish government and its dirty energy sponsors from wrecking the UN talks – and our climate.

Evidence shows pharmaceutical companies won’t stop price-gouging and risking American lives for financial gain in this time of crises – unless we force them. Lynn Parramore is Senior Research Analyst at the Institute for New […]