Sales of diesel cars in Germany jumped towards the end of 2018. Does this indicate a revival? Perhaps its says more about the late response of  Volkswagen to a global crisis.

Cross-posted from the ICCT 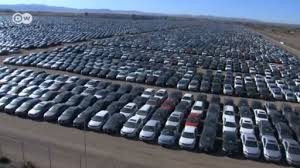 One of the most-read blog posts on the ICCT website is one that I wrote back in 2012. Despite its age, it attracts a surprisingly high number of readers. We are not exactly sure why. My colleague Anup Bandivadekar speculates that the title (“The dead hand of the past“) has an influence. On the other hand, maybe the content of my 2012 blog post is indeed still relevant and exciting.

In essence, I described how in the old New European Driving Cycle (NEDC) laboratory test procedure for determining the emissions of a vehicle, the car weight used to be simulated using so-called “inertia classes” and how manufacturers were gaming this outdated practice to gain an advantage. The new laboratory test procedure, the Worldwide Harmonized Light Duty Test Procedure (WLTP), finally puts an end to this anachronism and mandates the use of modern computer-based testing equipment to accurately reflect the actual weight of a vehicle.

It is surprising though how this dead hand of the past, as I called the NEDC back in 2012, still influences us in 2019. Specifically, the transition from NEDC to WLTP has a direct effect not only on vehicle CO2 emissions, but also the market share of diesel vehicles in Europe and even the overall economic climate in Germany due to a decrease in vehicle sales.

The influence of the NEDC-WLTP transition on vehicle CO2 emissions is worth a separate blog post. Originally, we had estimated that a technically sound conversion factor would be around 1.10, meaning CO2 values in WLTP should have been about 10% higher, and also more realistic, than in NEDC. In reality, the CO2 values seem to be about 15-25% higher, depending on vehicle type and vehicle manufacturer. We will keep collecting the incoming data throughout the next months to analyze if we are witnessing another case of gaming the system or if there is a valid technical explanation for the surprisingly large delta between NEDC and WLTP CO2 figures.

The figure below summarizes the diesel passenger car share over the last years for the five biggest vehicle markets in Europe. As explained in a previous blog post, the new car diesel share in France began to decline before Dieselgate broke in late-2015, mostly due to a reduction of subsidies. In Germany, Spain, the UK, and with some delay Italy, market shares began dropping not immediately after Dieselgate, but from mid-2016 onwards when it became evident that many cities might take action against emissions from diesel, including banning some diesel cars. Since then, consumers have turned their back on diesel technology in large numbers, and the average new car diesel market share has dropped continuously. In Germany, the share dropped from close to 50% in late-2016 to close to 30% in late-2018. Until recently, it seemed like diesel market shares would keep dropping, as tax subsidies for diesel are being phased out in many markets and (re-)sale prices of diesel cars keep decreasing in light of imminent urban-area driving bans for diesel cars. In France, Italy, Spain and the UK this is indeed what we are seeing: diesel cars continue to become less and less popular—in Spain and the UK the diesel share fell below 30%. But in Germany, the opposite is happening, the market share of diesel cars seems to be stabilizing and even increasing since late-2018. So, is this a revival of diesel?

Taking a closer look at the new car market in Germany (see figure below), it becomes obvious that the increase in diesel share is driven mostly by the Volkswagen Group (i.e. Audi, Seat, Skoda, Porsche, VW). While the diesel market share for Volkswagen shot up from about 35% in fall 2018 to nearly 45% in January 2019, for other manufacturers the share of diesel cars is steadily declining. The Volkswagen Group accounts for about 35% of all new car sales in Germany, which explains why any sales trend for Volkswagen has much more of an influence here than in other markets. For individual brands in the Volkswagen Group the variations in diesel share are even more pronounced. In the case of Audi, diesel accounted for about 65% of German sales in late-2016, going down to about 50% in the first half of 2018, and then suddenly dropping to nearly 20% in late-2018 before bouncing back to 40% in January 2019. The last figure below provides another perspective, showing absolute sales of diesel cars in Germany instead of percentage shares. First of all, this figure impressively demonstrates how much Volkswagen dominates the German market, and in particular the diesel market, with the Volkswagen Group brands selling nearly as many diesel cars per month as all of the other manufacturers together. Second, it is evident that Volkswagen group diesel car sales dropped dramatically in fall 2018 to almost zero, while the rest of manufacturers kept selling diesel cars at more or less normal levels, before Volkswagen diesel sales returned to their previous levels in late 2018 and early 2019. What is it then that makes the Volkswagen Group sales pattern in 2018/19 look so different compared to the other manufacturers? Only Volkswagen knows for sure, but we have indications that it is indeed the dead hand of the past: the transition from NEDC to WLTP. From September 2018, it became mandatory for new passenger cars to get type approved under WLTP, meaning manufacturers could not sell new vehicles that were still type approved according to the old NEDC. While most manufacturers were well-prepared for this transition date, Volkswagen was not. The company could not get its new vehicles smoothly through the certification procedure and had to park about 250,000 brand-new cars until the necessary paperwork got complete. (A large number of these vehicles were parked at Berlin’s infamous unfinished new airport, that also struggles to pass the certification procedure for its grand opening, originally foreseen for 2012).

These delays in delivering new vehicles to consumers affected both diesel and gasoline cars. However, while diesel car sales bounced back relatively quickly, by end-2018, the company struggled with getting their gasoline cars through type approval certification for a couple more months, which then explains why the relative share of diesel car sales increased so strongly in late-2018 and early-2019. As media sources report, the underlying reason here was the fact that Volkswagen originally had expected to meet the new requirements for gasoline particulate emissions without a gasoline particulate filter (GPF). By the time the company realized that – under real-world driving conditions – this was unrealistic, other manufacturers had already purchased almost all the GPFs available from parts’ suppliers at that time.

In the near future, it is possible that a new generation of Euro 6d-(TEMP) compliant vehicles will spur interest, at least among some customer groups. At the same time, once Volkswagen finishes delivering the remaining parked vehicles from its end of 2018 certification-stream-clutter, the diesel share of the company, and therefore the entire German diesel share, is likely to return to sub-30% levels. The longer-term perspective of diesel technology also does not look good, as it requires expensive exhaust aftertreatment technology to reduce emissions under real-world conditions. At the same time, production costs of electric vehicles keep declining due to economies of scale. Not surprisingly, many car brands are phasing out, or have already phased out, diesel technology in Germany, such as Dacia, Hyundai, Kia, Mazda, Mini, Mitsubishi, Nissan, Opel, Porsche, Renault, Smart and Toyota (all with a diesel share of 15% or lower by mid-2019). A real revival of diesel, even in Germany, seems unlikely to me at this point.

How is all this linked to the status of the Germany economy? Well, that brings us back to the point that the Volkswagen Group, with its 35% market share, has a tremendous influence on the German new car market. And on the German economy overall. When Volkswagen’s new car sales went down close to zero in fall 2018, the implications hit not only the company itself but hampered the GDP of the entire country; for the first time in three years, the economic output of Germany shrank. In that perspective, the introduction of the WLTP did not only have an effect on vehicle CO2 emissions and diesel market shares, but also on the economy of an entire country. This, I definitely did not foresee when writing about the dead hand of the past, back in 2012.

Patrick Cockburn – Russia-Ukraine is an Information War, So Government Intelligence Needs More Scrutiny Than Ever

It is amazing that people still believe the rubbish coming from so-called intelligence agencies. On the other hand, organisations like Wiki-Leaks are considered dubious. Patrick Cockburn is the author of War in the Age of Trump […]

This is the first in a series of posts on the future of work since the pandemic slump. Michael Roberts is an Economist in the City of London and a prolific blogger Cross-posted from Michael’s Blog […]