The US election in on coming Tuesday 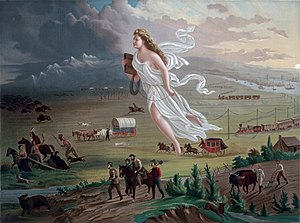 The Black Lives Matter movement in America has crystallized some of the key issues facing humanity concerning the kind of world we wish to inhabit. The facts of slavery in America are, in many ways, uniquely vile, and the racism and hatred that has galvanised the current movement passes through the echo chamber of history and is poorly understood by most white Americans and Europeans. I include myself in that assessment. To borrow from Arlie Hochschild (Strangers in their own Land) and in a different context, as a white person you need to climb over an empathy wall to understand it. Once you start reading history though, it is not actually so hard. It is just that the idea of America, which is repeatedly and endlessly white washed over everything, is spectacularly and totally false. A ‘veil’ to borrow from W.E.B Du Bois.

The 1872 painting American Progress by John Gast shows the new white settlers being led across the frontier by a floating woman in flowing white robes. She carries a school book and is stringing telegraph wire. As the light shines forth across the plains, indigenous people and buffalo scatter before the light like so many rats and cockroaches. The great coffee table book that is Democracy in American, the one that everybody dips into for a pithy quote, contains two essays that are in many ways more instructive than the main body of the text. In Two Weeks in the Wilderness and upon seeing a drunken ‘Indian’ who could be dying in the street, De Tocqueville notes how his American companions ‘acknowledged that the Indian would probably die but you could read this half-expressed thought on their lips: “What’s the life of an Indian worth?” That was the essential feeling of everybody’. De Tocqueville goes on to note that, ‘at the heart of this very civilized, prudish, pedantically moral and virtuous society, lay a completely insensitive attitude, a kind of cold and relentless selfishness when it came to the races of America’. That attitude for many white Americans, especially the ones in white pointy hats and red baseball caps, has hardly changed.

Examining the many hundreds of pictures of indigenous people in Edward Curtis’s somewhat artless The North American Indian, the gaze of the viewer is forced into a kind of inhuman, inhumane and anthropological ‘species interest’. They have been exterminated and are now being memorialised through the selective eyes of a white person. The taxonomic pathos of the photographs is unbearable. It is the sad, photographic equivalent of a lepidopterist’s pinning board. White America didn’t care about the ‘Injuns’ then, and it doesn’t care about them now. In respect to Covid, look at what has happened to the Navajo Nation. The ‘Indians’ were invisible to the Americans of the disappearing frontier. So, in Ralph Ellison’s seminal Invisible Man, are most African Americans. So, in Europe, are people in boats — ‘migrants’. They just wash up on the beaches with the flotsam of the tide. They have become an almost ‘natural’ phenomena. For those who want to insist on an artificial separation between American and European fascism, a quick viewing of those images should serve as a necessary corrective. Should he win, Trump’s America will be full of rancour, hatred and alarm. Walmart have already reduced access to their buckets of bullets and guns, as if expecting some kind of major civil unrest. If he wins. Or he if loses. Is such thinking really beyond the realm of possibility? I don’t imagine so. Before he died, Philip Roth said Trump spoke ‘jerkish’. The great American writer captured something there. And he’s spread that ‘jerkish’ across large parts of America who now also speak and think in it. Trump’s rally in Tulsa, the Art Deco city of race massacre, semaphored his real values to his followers. The Grand Old party is not so grand now. Decidedly tatty, in fact. Enabling and instigating. Enabling and instigating only itself though. Since Trump is the distraction through which McConnell pushes his horrendous agenda. If the Trump Presidency is seen as some kind of stress test for so called democratic institutions, then they have failed miserably.

To abuse Primo Levi, Trump’s ‘truths’ (Make/Keep America Great?) exalt Trump supporters by their splendour. They are convenient because they can be acquired gratis and without too much effort. For Levi, of course, these are exactly the types of ‘truths’ that should be rejected. An uncomplicated, ahistorical idea of America that finds a home on the shuttleboard courts of Florida and hobbles around in canary coloured golf carts. None of them are properly earned. Despite the ritual praise to freedom and American individualism, a Trump crowd is a sculpted thing: increasingly cultish, pearl clutching about socialism, while tootling along and booing in all the right places. Should Trump win, we must all find the strength to resist the type of intolerance, servitude and abuse that this extreme, nativist conception of America would continue to unleash.

I would rank Janos Kornai amongst the five most innovative economists who have lived during my own lifetime Steve Keen is a Distinguished Research Fellow, Institute for Strategy, Resilience & Security, UCL Cross-posted from Steve’s […]

Renegade Inc – Michael Hudson: He died for our debts, not our sins

As we turn towards our faiths this Christmas and Hanukkah in an attempt to make sense of the year that was, economist Professor Michael Hudson says we have been interpreting the bible incorrectly. And he […]