It is not just that “liberal democrats” are anti-democratic, but they are making themselves ridiculous in their campaign to disguise their anti-democratic fervour. 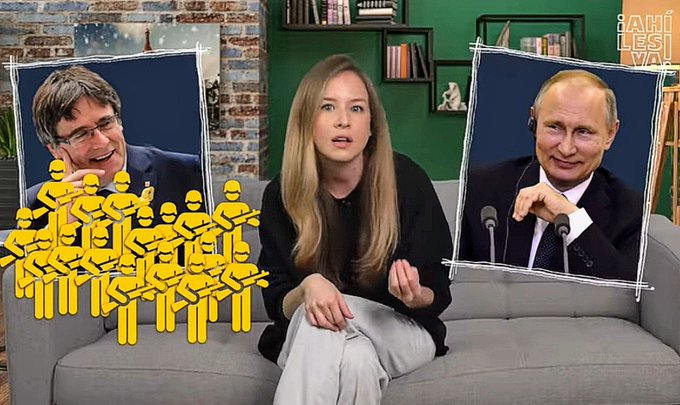 Large-scale police operation “Volkhov”, launched against the Catalan independence movement last October 28, has no doubt had unexpected results for those who planned it. Indeed, the operation has been seen to be particularly controversial for two main reasons. Firstly, because it has put a preposterous spotlight on Putin’s Russia as a possible ally of Catalan independence in 2017. But also because of the name unashamedly chosen by the Guardia Civil to label this operation: “Operation Volkhov”. To some it may seem a random, meaningless choice. But to those in the know, it cannot be seen as anything other than an insult to democracy.

Volkhov happens to be the name of a battle in the World World II in which the Spanish Blue Division fascists helped the Nazis to invade Russia. By participating in this offensive, Franco wanted to show his gratitude for the aid he received from Germany in the Spanish Civil War. At the Battle of Volkhov, Spanish soldiers “heroically” crossed a river and occupied some heights thus helping to get the Nazis a position of advantage over the Russians.

Today’s Civil Guard command, by choosing this name, are undoubtedly fulfilling two objectives. Firstly, that of honouring the memory of a fascist Division, which in itself is shocking enough. But also that of associating a fascist victory with a macro-operation against the Catalan independence movement. Could the underlying nationalist message be any clearer? Perhaps the most worrying thing about the whole episode, though, is the fact that Spain’s Government – the self-proclaimed “most progressive Government in history” – does not seem in the least concerned that one of its armed forces boasts of a Fascist past in choosing the name of its operations. It has been enough for Interior Minister Marlaska to admit an “error” here. However, neither is the operation’s name going to be changed nor has anyone at the EU shown any worry over Spain’s repeated tendency to overlook the recreation of fascist symbology. Indeed, the operation in itself – involving the arbitrary arrest of 21 entrepreneurs and activists – has unsurprisingly raised no eyebrows in Brussels, where convicting organisers of referendums and civil rights protests to a decade in prison is seen as good sport.

The second striking feature about this fresh lash of repression – accompanied by great fanfare in the unionist media – are the accusations made against some of those arrested of alleged negotiations with Russia in association with president Puigdemont’s 2017 independence bid. Incredible as it may seem, a Barcelona court is currently investigating whether Russia offered to help Catalonia become independent by means of contacts with some of those now detained. Conservative judge Joaquin Aguirre, leading the investigation from a Barcelona court, seems to have found “evidence” that Russia was to put 10.000 soldiers at the disposal of the Catalans to ensure independence.

It is with the official Russian answer to this far-fetched accusation that the case has burst into the Spanish media. On October 28, the Russian Embassy in Madrid issued a hilarious tweet warning that the Spanish media had mistakenly spoken of 10,000 troops when really 1,000,000 were to be sent. It went on to announce that the troops were to be flown out in “Mosca” and “Chato” planes, two historic Russian aircraft that had played a part in the Spanish Civil War. 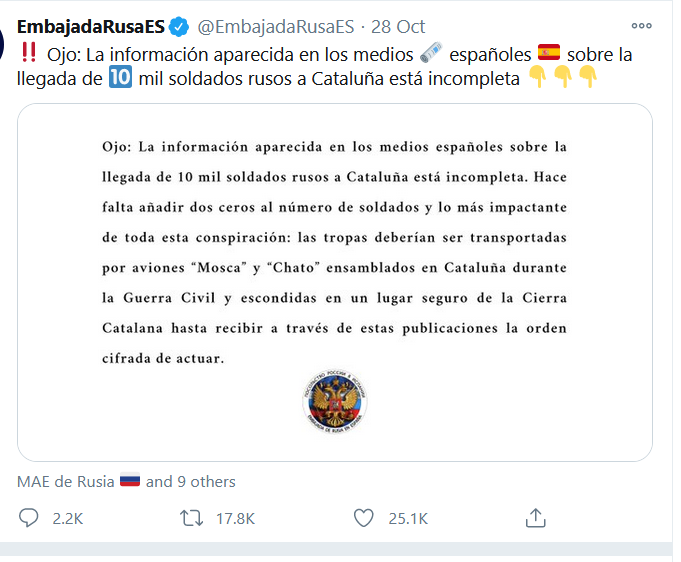 This mocking jibe – apparently aimed at the Spanish judiciary and media, but also at Sánchez’s government – showed a surprising lack of formality in an official statement, to the extent that it was first seen as apocryphal by many. But there it remains, five days down the line, on the Embassy’s official twitter account.

Certainly, the alleged Russian participation in the independence conspiracy is nothing new to this conflict. But no one had yet provided any evidence of the Kremlin’s real interest in helping Catalonia or destabilizing the European Union with this move. One early reference to this “case” may be found in statements made by President Puigdemont, in 2018, after being released from custody in Schleswig–Holstein after Spain had demanded his extradition. He said at a press conference in Berlin that plenty of fake news had been published in an attempt to establish a link between Russia and the Catalan independence bid. Puigdemont responded to press reports that indicated that the government of Vladimir Putin had supported the independence of Catalonia by way of the social networks. He said that internet bots were to be held responsible and that Catalonia had no interest in any form of Russian aid.

However, the fact that the Civil Guard and judge Aguirre insist on giving credibility to rumours about a possible intervention by the Kremlin in the Catalan issue is not overlooked by Brussels, despite the apparent absurdity of the case. The basis of the accusation made now are alleged conversations recorded on the mobile phone of former Catalan politician Víctor Tarradellas, a relatively unknown figure. They link him to an alleged Russian group willing to finance Catalan independence. The Civil Guard report also refers to a premeditated “disinformation” campaign, by way of Russian media such as Russia Today or Sputnik, aimed at internationally discrediting Spain. This campaign, says the Civil Guard report, has the collaboration of activists such as Julian Assange or Edward Snowden.

The international ridicule of Operation Volkhov

Now, three years after the Referendum and one year after the conviction of Puigdemont’s government, judge Aguirre seems to have found interest in old telephone recordings which speak of “10,000 Russian troops” being made available to help Catalonia become independent. And although it may be argued that Russia could indeed have had geopolitical interests in Catalonia, it would be foolhardy to see anything more to this present case than Madrid’s hare-brained strategy to portray president Puigdemont as “Putin’s man in Catalonia” for a second Brexit. Seemingly, the “evidence” for this would serve to carry out Madrid’s fervent obsession to have Puigdemont extradited to Madrid, a step for which the EU Parliament’s permission is needed. Nevertheless, not only is the “evidence” for this absolutely unfounded but there is also ample proof that Puigdemont has always rejected Russian aid, the possibility of a Catalan “Brexit” and the use of force in the whole independence Process.

In conclusion, whatever objectives its organisers may have had in launching operation Volkhov, the overall effect cannot be judged successful. Spain has once again been the laughing stock of Europe as it has been in almost all international rulings regarding Catalan affairs in the past three years. Indeed, observers are left wondering if this is the best Spain can do to continue reducing the Catalan independence movement. To this one must add the absurdity involved in the fact that an official accusation against the invasion of an EU country – by no fewer than 10,000 Russian soldiers – should pop up three years later in a courtroom procedure in which those accused are let off without even paying bail. If there really had been grounds for reporting such a huge military threat, how come this was not reported before the Security Council of the United Nations when detected? Or are more perverse issues at stake here, such as the neoliberal system´s need to convict and rid itself of idealists and political opponents such as Carles Puigdemont and Julian Assange?

Written from a US perspective, but just as relevant for the EU. Open Markets uses research and journalism to expose the dangers of monopolization, identifies changes in policy and law to address them, and educates […]

There is no environmental, climate or economic reason to include nuclear and fossil gas in the EU investment taxonomy Barbara Mariani is policy manager for climate at the European Environmental Bureau Cross-posted from META Photo: […]