How Germans continue to misremember the history of the Weimar Republic 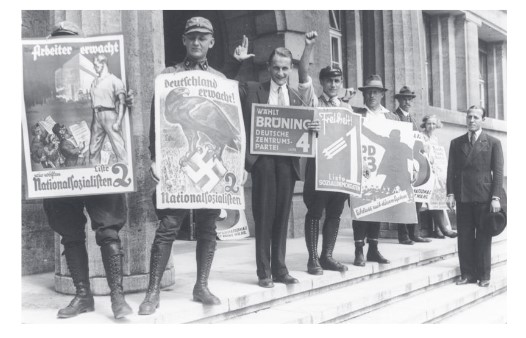 An economic history paper recently published in the Journal of Economic History is a must-read. Under the title “Austerity and the Rise of the Nazi Party”, the authors Galofre-Vila, Meissner, McKee and Stuckler study the link between fiscal consolidation measures and the electoral success of the Nazis in the early 1930. In 1928, the Nazis had 2% of the votes; by mid-1932 they received 38% of the votes in national elections. The paper provides empirical evidence according to which people in areas that were more affected by austerity (cuts in government spending and/or tax hikes) were significantly more likely to vote for the Nazis – while controlling for other potential explanatory factors such as unemployment. The evidence is based on voting data from thousands of districts and about one hundred cities for four elections over the time period 1930 to 1933.

From 1930 onwards, Reich Chancellor Brüning used emergency decrees to increase taxes and drastically cut government spending, which riddled the social safety net. Fiscal austerity worsened the situation for low-income households, and the Nazi Party became very effective at channelling the austerity-induced suffering of large parts of the German population and mass discontent. The authors of “Fiscal austerity and the rise of the Nazi party” provide evidence for this channel by showing that harsher fiscal consolidation in terms of health spending was associated with higher mortality.

This paper is not only important for understanding economic history, but should also inform current policy debates, especially in Germany. The reason is that distortions of the history of Germany’s Weimar Republic are currently used by some prominent voices in the debate that claim a direct link between the hyperinflation in 1923 and the rise of the Nazis. This alleged direct link is then used to warn of hyperinflation in the aftermath of the COVID-19 crisis, linked to the policy recommendation that monetary and fiscal policy should be tightened.

The well-known economist Hans-Werner Sinn, in particular, has repeatedly attributed Hitler’s rise to power to the hyperinflation ten years earlier. In an interview with the Neue Zürcher Zeitung (NZZ) in early December 2020, he directly linked the hyperinflation after World War I in the Weimar Republic, which contributed to impoverishment of the German middle class, to the rise of Hitler: “Ten years later they elected Adolf Hitler as Reich Chancellor.” Obviously, Sinn is not alone; one finds similar lines of argument in other conservative and inflation hawkish circles. Here’s Amity Shlaes in the context of the US debate: “if you’re concerned about Nazis, the next important move is drastic anti-inflation policy”.

But Hans-Werner Sinn is the most prominent German economist pushing the hyperinflation-Nazi-line of warnings. In his “Christmas lecture”, Sinn did it once more: he warned of hyperinflation, drew a direct line to the Nazis and failed to mention that the rise of the Nazi party was preceded by deflation and fiscal austerity. In his talk Sinn emphasises that money, like paper, was no longer worth anything in 1923, and shows a girl who had made a dress out of worthless banknotes. Given the way Sinn spins things rhetorically, listeners are tempted to fear hyperinflation. Of course, hyperinflation won’t come right away – but “what if the coachman can’t find the reins” once it gets going? Sinn uses his distorted interpretation of the Weimar history to draw strong policy conclusions for today: that policymakers should introduce “tighter budget constraints” and stop “living off the printing press”.

Sinn is feeding a common misinterpretation of economic history. Mass poverty at the time when the Nazis surged to power in the early 1930s did not result from hyperinflation, which had indeed ended ten years earlier. The Nazis thrived in an environment of deflation (i.e. falling consumer prices). The rise in poverty was primarily a consequence of mass unemployment caused by the deep recession in the early 1930s, but fiscal austerity also played a critical role.

A representative survey by Haffert, Redeker and Rommel shows that only one in 25 Germans today still knows that the crisis at that time was characterised by deflation. Almost half of the respondents conflate the mass unemployment and poverty of the early 1930s with the hyperinflation ten years earlier. Incidentally, this misconception is much more common among well-educated and politically interested Germans. In other words: those who are following the ECB’s monetary policy closely are, therefore, much more likely to draw the wrong lessons from German history, and from being misled by comments such as those made by Hans-Werner Sinn.

The effects that rampant inflation had on the Weimar Republic are deeply engrained in the German collective memory. Hans-Werner Sinn’s statements are a prominent exhibit for this kind of thinking. Given this reading of history, Sinn is more concerned about any form of expansionary monetary policy, even in a potentially deflationary environment.

Hyperinflation was indeed a traumatic event for large parts of the German population, and there is a point in arguing that it contributed to destabilising the Weimar Republic and making many voters feel disillusioned about the young German democracy. But whatever one may make of the indirect impacts of hyperinflation on Germany’s political economy, there is certainly not a straight line running from the hyperinflation to the rise of the Nazis, as Hans-Werner Sinn and others continue to suggest. A lot happened between the currency reform in 1923, when hyperinflation ended, and the rise of the Nazis.

Everyone interested in this period should certainly read Tobias Straumann’s seminal “1931”, a fast-paced book on how the debt crisis, mass poverty and fiscal austerity supported the rise of the Nazis in the early 1930s. The books gets one thinking about how well-meaning people across the political spectrum in Germany ended up doing things that undermined democracy and international cooperation. Obviously, the analysis in the book also suggests that mistakes were not only made on the side of German policymakers, and that one must be very careful in designing international arrangements (especially concerning the conditions of harsh reparation payments).

But what the Straumann book certainly does is to kill the idea that there is anything like a direct line running from the hyperinflation in 1923 to the rise of the Nazis. Indeed, the mass effect pushing towards the Nazis happened in a deflationary environment with unpopular fiscal austerity measures. As the paper “Fiscal austerity and the rise of the Nazi party” shows, electoral success of the Nazis is empirically linked to the harshness of fiscal consolidation in various areas.

The more interesting question is arguably to what extent the trauma of hyperinflation continued to affect policymakers in the early 1930s (a question which is not directly discussed in Straumann’s “1931”). In order words: to that extent did the hyperinflation experience make policy-makers such as Brüning more reluctant to use expansionary policies to fight mass unemployment, so that they instead introduced further deflationary cuts. Obviously, this potential link between the hyperinflation trauma, austerity and the rise of the Nazis is not what’s on the minds of Hans-Werner Sinn and others when they claim a direct link between hyperinflation and the rise of the Nazis. Otherwise, someone like Sinn would need to be much more careful about calling for “tighter budget constraints” today.

And even if one were to agree that hyperinflation “prepared the breeding ground for the Nazis”, as many think, comparisons such as those of Hans-Werner Sinn would remain deeply problematic: why should the ECB’s monetary policy today lead to hyperinflation similar to the early 1920s? Direct government financing by the German central bank back then was different from ECB monetary policy today. The economic and political circumstances are very different. The ECB is not under the direct political control of governments. The ECB buying bonds from investors primarily increases the central bank reserves held by commercial banks, but does not trigger (hyper)inflation as economies are running well below their productive capacities. Given recent deflationary pressures in Europe, it is even more amazing how the history of the Weimar Republic is misused to call for tightening policy now.

Why interpretations of history are so important

Calls for a rapid shift to fiscal consolidation to prevent a political turn to the right after Corona are a dangerous distortion, given that the empirical evidence shows that effects of austerity policies were an essential factor in the early 1930s in the Nazi’s electoral success.

Misinterpretations of history can be momentous if they lead economic policy down the wrong track. That’s why careful research such as this new paper linking votes for the Nazis to fiscal consolidation while controlling for other factors is so important.

Patrick Cockburn – Trump Could be Re-Elected in the 2024, Yet Democrats are Still Obsessing Over the Steele Dossier

This is what happens when a political class becomes cut off from reality, thriving in an environment of institutional corporate corruption Patrick Cockburn is the author of War in the Age of Trump (Verso) Cross-posted from […]

The goal of the Progressive Economy Forum is “transforming the economic narrative in Britain”. The desolate wasteland concerning economics in Britain created by corporate media (and not just in Britain) needs a new narrative based […]