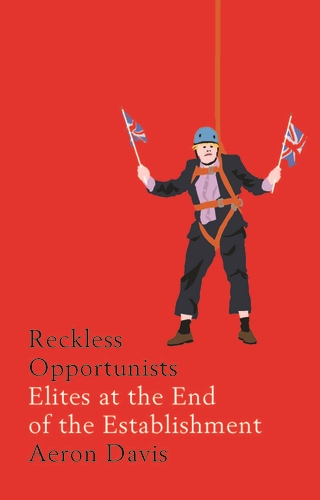 Oxford, Cambridge and the old school tie used to be a passport to the pinnacles of what was known as the Establishment. Things have changed, but not much, and not necessarily for the better. Now our leaders rely more on spin-doctors and the media than they do on business networks or parliamentary approbation. It has got lonelier, more brutish and shorter-term at the top. The more traditional values of social responsibility and altruism are in short supply.

In this new, short and readable analysis of the Establishment, Aeron Davis, Professor of Political Communication at the University of London, finds very little residual good in the top layer who, by and large, continue to govern Britain: among them are politicians, corporate executives, civil servants, bankers, journalists and “intermediary professionals” (lawyers, accountants, and lobbyists). Whereas in the good old days the majority of these people seemed motivated by a sense of responsibility, even self-sacrifice, for the public good, now their chief drivers appear to be “personal enrichment, individualism, enlightened self-interest, and a reverence for the ‘wealth creators’”. They tell lies to others and even to themselves about their goals and achievements. What else would one expect in this era of fake news?

Somehow the checks and balances which used to keep such people honest have broken down. Mr Davis lays a large part of the blame on the changing role of the media. The elite don’t choose to communicate through their boards or Parliament anymore; they prefer to spoon-feed their latest piece of strategy to the media, either by means of their spin-doctors, or in a one-to-one interview with a “tame” journalist. The deliberate trap set for the journalist is that he gets too close to his subject to remain objective. It is a double-edged sword: if the reporter is too distant from his quarry he foregoes the chance of close observation.

Mr Davis sees himself as an outsider – one who never lets himself get too close to his subject. Yet some of the best observations in the book are anthropological. In more than 350 interviews spread over a couple of decades, the author recorded much unguarded comment, though a lot of it is mixed with delusions of grandeur and a kind of licensed narcissism. For instance, Stephen Hester, former chief executive of state-rescued bank RBS, just after losing his job, characterises himself as different from his high-flying colleagues who even when relaxing appeared always to be “on duty”. “For me,” says Hester, “I had a very strong on/off switch.” And Sir Martin Sorrell, in the meantime former chief executive of advertising conglomerate WPP, congratulates himself on being perpetually on the move: “I go to certain conferences each year, the World Economic Forum, Allen & Company in the Sun Valley, Google’s Zeitgeist, WPP Stream, Burning Man…Going to the Singapore Summit next weekend.”

The impression of “being busy” particularly dashing from meeting to meeting, has replaced the leader’s more useful function as a risk-taker and innovator. Leaders of today don’t lead, says Mr Davis, they mostly follow the herd for fear of ending up as the outlier who got it wrong. That is true of politicians, corporate leaders and even government mandarins.

This book is something of a rant against the people who have floated to the top and rather unsportingly insist on staying there. But in their defence Mr Davis says he has hardly ever met a leader who does not have some redeeming good intentions. “Many have made big personal sacrifices to serve some imagined higher purpose,” he says. But they have largely abandoned the model of the leader who is there for the long term: “Psychologically and socially, as well as physically, they are detached nomads”.

Mr Davis makes a bold attempt to offer some remedies. But they are unconvincing: not because they are inappropriate, but because there are very few levers around to bring them about. Here’s the list:

Don’t give up on combating inequality

Reform the intermediary professions such as lobbyists and accountants

Leadership, concludes Mr Davis, could buck the nasty trend detected in this book and become “connected, modestly paid, nice, civilised and long.” But that requires the kind of reforms that probably won’t happen in the next 10 years: there are too many interests vested in the status quo. Nonetheless, political economists are surely allowed to dream.

Book review by Mathew D. Rose According to Bill Mitchell the book’s original title was “Reclaiming the Nation State”. The progressive publisher wanted the word nation removed. The term “Nation State”, claimed the publisher, was […]