Margaret Thatcher is undoubtedly one of the most divisive characters in British political history. But whatever you think of her, she’s a woman whose economic policies have had repercussions that are felt today.

She will always be known as a politician who loved the tenuous idea of linking property ownership to democracy, who valued economic over social progress, and who thought that a big bang liberation of the City of London would deliver untold riches for everyone…
But, in reality, after forty years of Thatcherism the UK now presides over austerity, a private debt explosion, financialization, privatization, deregulation, inequality and extortionate monopolies.

Host Ross Ashcroft is joined by economists and authors Grace Blakeley and James Meadway to discuss if today we are living in Thatcher’s museum. 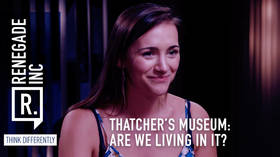 Steve Keen explains how economist have still do not grasp what caused the Great Financial Crisis.

This is a short (for me!) video discussing why one entity’s surplus is another’s deficit in a monetary economy, and why governments running a surplus are making the economy weaker rather than stronger.

Steve Keen – A First Principles approach to Energy, Environment, and Money in Macroeconomics

This talk at the European Central Bank covers the failure of economic theorists of all persuasions, not only Neoclassical, to properly incorporate energy into their models of production, and the failure of Neoclassical economists to […]