“Fascism merges private capitalism and the state. Political power then enforces capitalism’s basic rules: the economic dominance of the major shareholders and their top directors and managers.” Do not panic, Wolff is writing about the USA and not the EU: 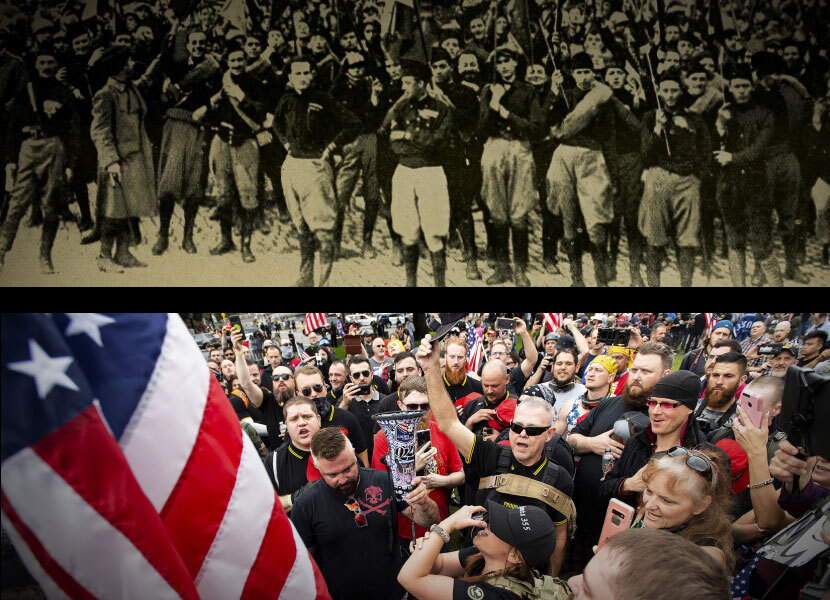 Viewing the GOP convention seemed a little like binge-watching the last several years’ parade of none-too-subtle signs of incipient fascism. We saw extreme nationalism, scapegoating immigrants and foreigners in general, white supremacy, “strong (narcissistic)-man” government, aggressive foreign policies, and hysterical red-baiting. Those signs reflect how capitalism’s deepening crisis undermines both the centre-left (Democrat) and centre-right (GOP) and shifts politics further right and further left. Trump represents the anti-centre right, Bernie Sanders the anti-centre left. Most capitalists want neither; the centre worked very well for them over the last 75 years. As that political centre implodes, U.S. capitalists favor the right over the left. They see the difference between fascism and socialism very clearly. They are not fooled by the crumbling old centre’s self-serving efforts to equate socialism and fascism.

Fascism can indeed “happen here,” but in unique fashion. Fascism, like all other systems, has varying forms. As 20th-century fascisms took shape in Italy, Germany, Japan, and Spain—to take some major examples—the same basic system interacted differently with each country’s particular history and conditions. The fascism where U.S. capitalism is now headed will display unique features as well.

The fascism taking shape here is not primarily the crude political theatre that today’s wannabe fascists offer. The Trump regime’s courting of white supremacists and other extreme nationalists, its virulent scapegoating of immigrants, Latinx, and African Americans, and its encouragement of police repression are too often counterproductive. Those symbols are similar enough to many of 20th-century fascism’s horrors that they are too easily recognized as dangerous. Today, the United States moves more quietly and more effectively toward fascism via its fast-evolving credit system. It’s time to expose borrowing as a path to fascism.

Today’s crisis-ridden capitalist economy is more dependent on credit than at any time in the system’s history. More than ever, credit sustains the purchasing power of consumers and of government programs. Capitalists depend on that purchasing power. Corporations now routinely carry more direct debt than at any time in the nation’s history. Zombie corporations—those whose profits no longer suffice to service their direct debts—now figure sizably in U.S. capitalism.

Once it was mostly private entities—rich families, banks, insurance companies, and pension funds—that were the chief lenders to corporations. They bought and held the corporate bonds and IOUs. Now those private lenders increasingly sell their corporate bonds to the Federal Reserve. That happens when the corporate loans get packaged into asset-backed securities sold to the Federal Reserve. More recently, the Fed has undertaken the market purchase of exchange-traded funds (ETFs) composed of corporate bonds and of corporate bonds direct from their private issuers. It has also made “credit facilities” directly available to corporations, tax-exempt entities, and municipalities. As the lender of last (and fast-growing) resort, the state becomes ever more the social basis of credit. The Federal Reserve is thus gathering the means to directly control the allocation of credit in a credit-dependent capitalism deeply threatened by its inherent cyclical instability, a major viral pandemic, accumulated domestic social problems, and growing international competition and isolation.

Key deals and intimate relationships between major non-financial corporations and their banks once drew the special attention of careerist politicians, students of capitalism, and also capitalism’s critics. “Finance capitalism” became an important new concept. As credit proliferated into all aspects of capitalism and grew ever more central to its functioning, another new term emerged, “financialization.” Once mostly private, that is no longer the case.

Perhaps we should call this latest phase: “state financialisation.” The state’s central bank has become ever more important in controlling the conditions and pathways of credit in capitalism. That has been increasingly evident as capitalism lurched from the 2000 dot-com crisis to the 2008 subprime mortgage crisis and since. Credit provision by the Federal Reserve is now crucial to U.S. capitalism’s passage through the COVID-19 megacrisis and beyond. It is crucial to capitalism’s very survival.

The Federal Reserve now dispenses credit in historically unprecedented dimensions. As they keep their system going, capitalists, the Federal Reserve, and the rest of the government are feeling their way to a U.S.-style fascism. Step by step, they recognize their mutual dependency and sense the possibilities of credit as the cement—and perhaps the only cement—to hold an alliance among them together. Yes, they worry about their newly created mountain of money and how it might veer away from inflating the stock market to inflating and disrupting other markets. But that concern has been eclipsed by the urgency of saving a badly stumbling capitalism today. Capitalists who once bemoaned soaring government deficits and exploding national debts are mostly silent. They know that capitalism’s survival requires massive government, corporate, and household debts and their monetization by the Federal Reserve. The system is teaching its elites about the need for transition now from capitalism to fascism. Only for many of those involved, that transition is not yet quite conscious or visible.

Fascism is what happens in capitalism when employers feel that (1) their system’s accumulated problems exceed its capacity to solve them and (2) strong (often dictatorial) state intervention is needed for the capitalist system to survive. Fascism can also be capitalism’s response when the victims of capitalism’s inequalities (economic, political, and cultural) and instabilities (business cycles) will no longer tolerate them. If and when capitalism’s critics—especially socialists—build a sufficient mass consciousness and mobilize mass organizations that threaten capitalism with major reforms or with revolution, capitalists can seek an alliance with a strong political counterforce to construct a fascism. Such a strong counterforce can be a politician or a political party that captures the imaginations of masses of capitalism’s victims but blames not capitalism but rather immigrants or ethnic or religious minorities. If such politicians or parties attack and oppose socialism and offer capitalists a mass base they need but lack, capitalists will support them. Fascism—a merger of private capitalists and a state that reinforces their system—will have arrived once a fascist party acquires state power. Where socialists advocate system change, fascists advocate nationalism understood as a merger of private capitalism and the state apparatus to exalt some national ideal.

In contrast, socialism is what happens to capitalism when employees feel that capitalism’s accumulated problems exceed the employers’ willingness or the system’s capacity to solve them. Socialists are those victims and critics of capitalism who see it as the problem and system change as the only real solution. By system change, socialists have typically meant combinations of socialized (not private) ownership of means of production, centrally planned (non-market) distributions of resources and products, and democratic worker-coop-type (non-hierarchical) organizations of enterprises. Socialists have long been interested in acquiring state power as a means to accomplish system change. Exactly how much and how far system change should extend has been fiercely contested among differing kinds of socialists, and those issues are still hotly debated. Socialists from Marx on to the present have likewise often associated with anarchists around a goal many shared: what Lenin called “the withering away of the state.” Socialists have usually advocated internationalism—“workers of the world unite against capitalism”—as against fascist’s nationalism. These are some key differences separating fascism from socialism.

Fascism merges private capitalism and the state. Political power then enforces capitalism’s basic rules: the economic dominance of the major shareholders and their top directors and managers. In fascism, that dominance extends from economic to also political and cultural realms of social life. It goes well beyond the norm in non-fascist societies based on capitalist economies. For example, labour unions are suppressed or converted into state agencies. All independent labour activity is proscribed. For another example, public education is restructured to serve and feed directly into employment. Monetary policies, exchange rates, and trade balances are managed to achieve nationalist objectives. Cultural institutions are reconfigured and reorganized to celebrate fascism. In the early histories of some fascist parties, socialist criticisms of capitalism were borrowed and repeated to attract working-class adherents. Once those parties made their deals and alliances with capitalists, those early socialist criticisms were silenced and their authors expelled or worse.

In fascism, major shareholders and the boards of directors they elect make all the key private enterprise decisions (what to produce, how, and with which technology and how to use net revenues or profits) as in private capitalism. However, top state officials wield major influences on directors’ decisions or may join them to take seats on the boards. The fascist state typically silences capitalism’s opponents usually on the grounds that their activities constitute treasonous disloyalty. It likewise destroys the political parties of socialists, communists, and other critics of capitalism. For their part, the employers in fascism celebrate and fund the fascist party and the state it runs.

U.S. capitalism’s passage from a private to a state system of credit creation is now viewed as necessary by both of its constituent partners. Private capitalists, on the one hand, and the top political circles in both major parties, on the other, are thus merging into a particular kind of fascism. State financialisation facilitates that merger. That some of the partners disagree with Trump and his traditional manipulations of fascist symbols does not change the transition to fascism under way and accepted by the consenting partners.

Victoria Falls viewed from Zambia. A case brought by Zambian farmers in UK courts could have international implications. FCG / shutterstock Sam Varvastian, Cardiff University A ruling by the UK Supreme Court could have huge […]

From exploration / production through to consumption coal is subsidised to the tune of US $47 billion annually by G20 nations, yet they claim to be wanting to cut greenhouse gas emissions. What’s going on? […]

In 1970 Shell caused a huge oil spill in Nigeria. After finally being sentenced to pay damages to the affected community by the highest Nigerian court, Shell is now starting investor-state arbitration proceedings, to drag […]