Unemployment is heading for record numbers, Coronavirus deaths keep climbing, and the stock markets are heading for new records. Something is not right. But this is the discourse we are hearing in mainstream media: Things are rapidly going back to the way they were. Just connect the dots and any non-economist or non-central-banker will discover another story.

The Bank of England has published three critical charts this morning that explain what it thinks might happen as we get over Covid 19.

This is what they say has been going on across the globe: 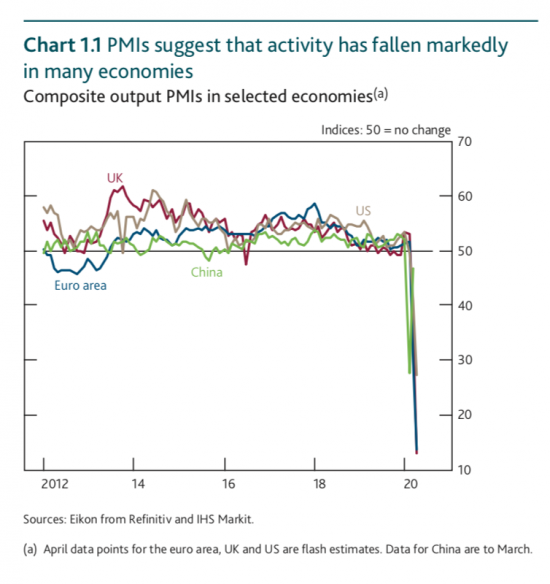 This is what they say is happening right now: 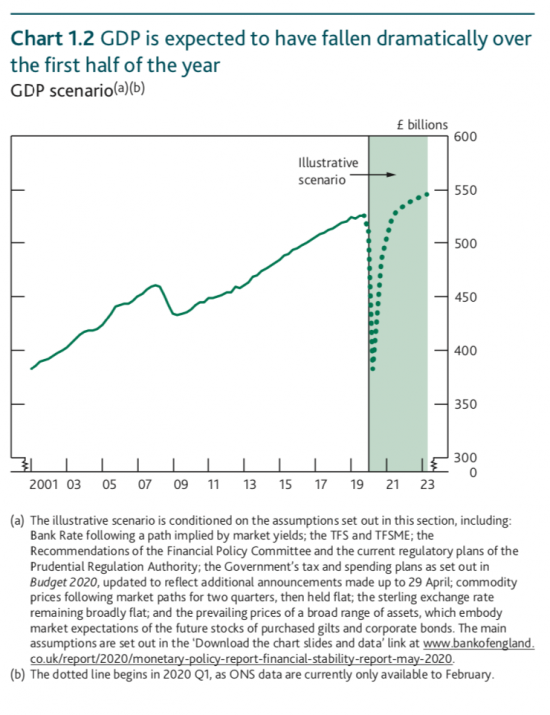 And this is their forecast based on what they call their ‘scenario modelling’: 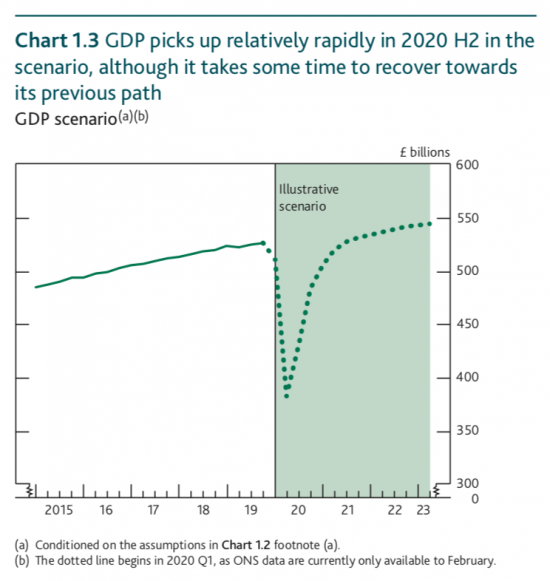 Let’s summarise that. First they say we fell off a cliff, along with everyone else.

Then they say that the consequence was a massive (unprecedented) fall in GDP: it’s been suggested that it’s bigger than anything since 1706, and data was not so good back then.

But third, we’re going to be back on track by the end of 2021 as if nothing had happened. Voila!

But that struck me as implausible, so I sought out their assumptions (which they do not make it that easy to find: why their smallest PDF of the day had to be hidden in a Zip file is hard to work out unless they wanted as few people as possible to get to it). These are the main assumptions behind that bounce back: 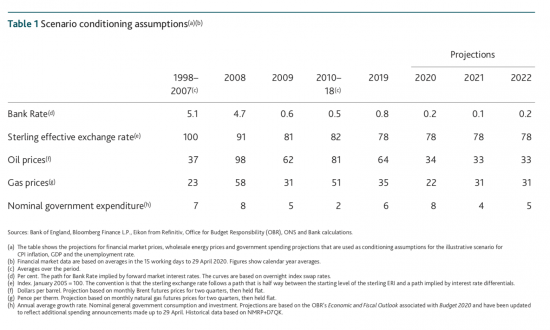 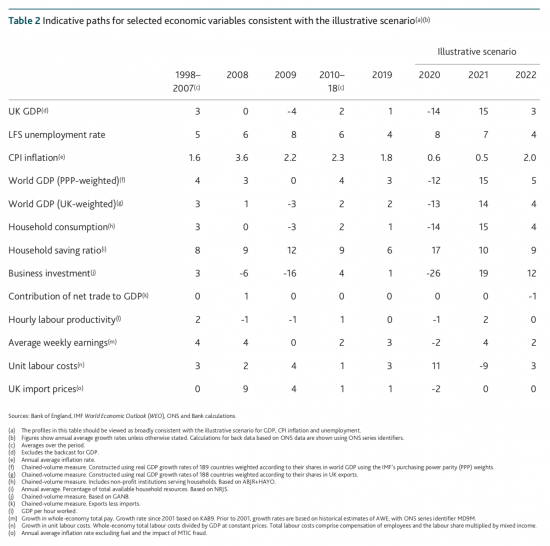 Frankly, these are ludicrous. I am afraid that I always presumed Andrew Bailey was hired to be a willing fool: now we know that is true.

Let me highlight just some of the conditions for the bounce-back that are not going to happen.

First, it is claimed that the exchange rate is not going to be impacted by hard Brexit, which is the only Brexit left on the table. But that is impossible, and not yet priced by markets, I would suggest.

Third, it is claimed that unemployment will bounce back quickly. If anyone thinks that’s true, they’re whistling in the wind. Whole sectors of the economy are already wiped out.

Fourth, it is suggested that government spending is going to remain high even though we are bouncing back, which makes little sense and most definitely not what the government will want to do in that case.

Fifth, it is suggested that GDP will virtually recover in 2021 (and yes I know 15% increase after 14% fall is not complete recovery, but 3% in 2022, which is way above average, is the remainder of the recovery). I really do not see that happening.

And sixth, that is because you do not get that growth with 17%, 10%, and then 9% household savings ratios in successive years, which is what is assumed, meaning that exceptional levels of non-spending are to continue, which means growth must be crushed as a consequence, even though the model says otherwise.

Whilst, seventh, business is not going to do all-time record rates of investment as is claimed when it is going to be deeply vulnerable following this crisis and already burdened with debt: that is a claim from fantasy land.

And eighth, productivity is not going to be maintained, as is suggested, unless (and this is what I think the Bank must have been told) all social distancing ends: we know that otherwise that is just not possible.

And ninth, where is the pressure on wage rates to grow by an exceptional amount going to come from in the next couple of years? It just is not there. We have mass unemployment.

I could go on but I do not need to do so: this scenario plan is completely ludicrous and shows three things.

First, that we do not have an independent Bank of England. This is it playing to the government’s tune.

Second, to put this forward as a plan indicates a level of either incompetence or outright willingness to misrepresent the truth at the Bank of England.

And third, we should not trust a word they say as a result.

I hate to say those three things, but what else is one meant to conclude?

Residents of tourism hotspots are fighting back. Shutterstock   Claudio Milano, Ostelea – School of Tourism and Hospitality; Joseph M. Cheer, Monash University, and Marina Novelli, University of Brighton The summer holidays are in full […]

Ashoka Mody: The EU is in trouble and Ursula Von der Leyen is the wrong person to rescue it

Danny Dorling is Halford Mackinder Professor of Geography, University of Oxford Cross-posted from Danny Dorling´s blog In hindsight we should have seen it coming. But none of us did, or at least no one […]