While many of us are shocked by the rapidly increasing  consequences of climate breakdown, it is critical that we organise to counter the economic interests that are responsible for this disaster.

Rupert Read teaches Philosophy at the University of East Anglia, UK. His new book, “Why Climate Breakdown Matters”, is out now.

Rupert will be holding a talk entitled “Ready for the whole truth?” on Wednesday,19 October, at 8pm CET at Helle Panke, Kopenhagener Str. 9, 10437. The talk will also be live on Zoom Both with a simultaneous German translation. For Zoom please register at https://helle-panke.de/de/topic/3.termine.html?id=3373 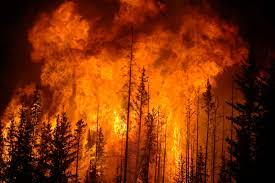 The climate disasters of today are of a profoundly unnatural character. They are the product of pumping the atmosphere full of carbon dioxide, methane, and a litany of other greenhouse gases. They can be well likened to an athlete on drugs rather than running on natural inputs alone.

The wildfires, droughts and flash flooding we’ve seen in the past few years are only a taste of things to come.

Even if our economic system were to decarbonise overnight, the time lags between the production of emissions and their effects on the global climate means that we would still experience more frequent and severe disasters than we are seeing today. That much is locked in. The only partial respite achievable will be if we are successful in adapting our infrastructure and agriculture to be more resilient to an increasingly hostile ecology.

When confronted with the sobering reality of climate breakdown it is tempting to give in to one of two impulses. On the one side, there is the allure of wishful thinking and naïve or ‘stubborn’ optimism. It calls for us to imagine best-case scenarios. Perhaps, contrary to current trends, those climate models that predict less bad impacts will eventually be vindicated. Or perhaps technological innovation will deliver us a panacea that reverses most of the harm of climate breakdown.

On the other side, there is the temptation to embrace doomerism and abandon all hope that we will, or are even capable of, meaningfully turning to address the climate crisis. Perhaps political and economic forces are too firmly entrenched to be moved at all by popular will and protest. Or perhaps human psychology is too stubbornly hardwired to focus on the immediate future at the expense of the long-term thinking required to meet the challenges of the climate crisis.

These two perspectives could not be more diametrically opposed in their treatment of the seriousness of climate breakdown. Nevertheless, they are often rooted in the same profound grief that we feel at what is being done to our planet. Doomers try to deal with their grief by deciding that nothing can be done, thus letting themselves off the hook; they deny their own agency, to deal with the pain of failure, thus fr and perhaps in the future, to stem the deadly tide of eco-decline. Whereas optimists try to deal with their grief by suppressing it, and insisting to themselves and each other that somehow all will still be well.

So: This grief can lull us into a distorted view of reality, where either everything is broadly fine or completely irredeemable. Either path leads to disavowal of our own agency to meaningfully act, on the basis of truth, in midst of climate breakdown.

The uncomfortable truth lies somewhere in between these two positions: While it is certainly too late to avoid disasters, it is not yet too late to avoid the very worst-case scenarios that climate breakdown threatens. It is not too late to make things less bad. Facing up to climate reality means accepting that things will get worse and working to build a more resilient society.

If our grief sometimes gives us a distorted perspective on climate breakdown, then the title of this article seems inapt. How could climate grief be the making of us when it seems to be pushing us to disavow our own agency?

To understand this, we need to first understand where grief springs from. Love is at the root of all aversive emotions. We feel eco-anxiety because we love life. We feel fear for the fate of those who we love (including ourselves!). We feel rage at the state of things because of our passion for those weaker or more powerless than ourselves are unnecessarily being put in jeopardy. And we feel heartbreak and grief for what is ‘lost’ and what more will be lost.

Denial is the not altogether unreasonable resistance to the devastating loss I’ve described. It is the motivated rebellion against it. After all, it is not entirely believable what we have lost, and what we are in the process of still losing. It is simply too awful to be believed.

Yet there is another more authentic form of rebellion than denial. And that is motivated rebellion to stand up for people and planet by protecting what is still protectable and mourning what is lost. That ‘rebellion’ may take many forms: from throwing one’s money at the crisis, to insisting on making the climate crisis present in one’s workplace, to quitting one’s job or breaking the law. We need those diverse forms. We need everyone who is waking up to step up fully into their – your – power.

The intimate connection between grief and love reveals just how the process of grief can catalyse us into a state of action. For without love for the planet and its inhabitants our grief could not tempt us into either the naïve optimism or doomerist perspectives that cloud our vision of what remains possible! So these positions are both potential jumping-off points for action, once we see more deeply into our own grief, and recognise how badly we need for it to mobilise us. For love, which grief is based on, ultimately needs to expressed in behaviour, movement, action.

The upshot of all this is that it reveals that the gap between soft climate denial and forceful climate action is often less than that between indifference and action. This may in itself be a cause for some non-naïve, active hopefulness. After all, if grief is often at the root of both denial and action, then shifting people from the former to the latter is surely an easier task than moving someone from indifference to action.

Why then does grief provoke such radically different responses in people? Well, part of the reason stems from the extent to which grief has become individualised rather than shared.

Our society obstructs the collective mourning of what has been ‘lost’ in ecology and climate. This makes it harder to understand that the unbelievable nature of the crisis is in fact a deeply shameful truth.

By individuating grief in the way our society tends to do we encourage the fantasies of naive optimism, doomerism and outright denial. There is a reason communities come together and grieve when a person passes away. Collective mourning helps us better understand and process the loss. Yet, we do not do the same enough with the rending of climate and nature. This needs to change if we are to going to catalyse those in the early stages of grief into activists helping to create a better world.

These are dire times. The climate is spinning out of control and our ecosystems are collapsing under the strain of increasingly unnatural disasters. This is not a time for denying our emotions or embracing fantasies of powerlessness. Instead, we need to feel our emotions, recognise the power we still have, and change the world for the better.

That begins with coming together with others to share your eco-grief. Do it wherever you can find mutual support: with friends or colleagues, with a therapist, with a support group, with activists, in any kind of world-changing organisation. But do it.

And you’ll find, as my teacher Joanna Macy has long maintained, that grief is a mighty latent power. It’s the power of love, of truth, of righteous action.

We have only so far seen the beginning of what it makes possible. There is a natural path from allowing one’s/our ecological grief to acting upon it. This path is going to be followed by more and more of us, as this decade unfolds in al its horror and nobility.

Thanks to Atus Mariqueo-Russell for invaluable editorial assistance on this article.

Lina Gálvez – The price of “freedom” in Catalonia

In our continuing coverage of Catalan Independence Lina Galvez has a different perspective on the issue, especially who the winners and losers of  Catalan independence will be. Lina Gálvez is Professor of Economic History and […]

Patrick Cockburn – The Decline in Power of the Oil States

There are tectonic shifts taking place in world politics and the global economy hidden by the Covid pandemic. Patrick Cockburn is a journalist and author of  The Rise of Islamic State: ISIS and the New […]

Globalisation has been in decline longer than we think – and an end is not in sight. Michael Roberts is an Economist in the City of London and a prolific blogger Cross-posted fromMichael’s Blog Photo: tommy.lan […]