In neo-liberalism everything loses its inherent value and becomes a vehicle to profit-maximisation. 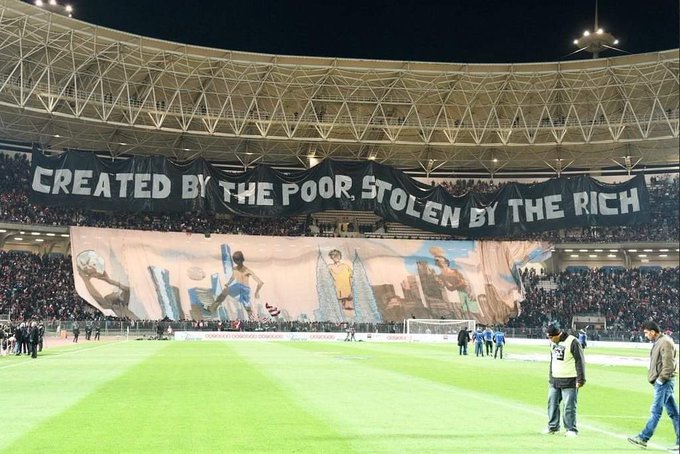 This is the morning when the arrogance of elites appears to stand out.

Most obviously this is apparent in the overnight announcement that 12 of Europe’s largest football clubs have decided to break away from the concept of competition and to instead set up a Super League in which they are guaranteed to have continuing membership whatever their success in domestic football competitions might be.

Six of these clubs are from England. The result is that in effect, competition in the UK’s Football League is rendered meaningless almost overnight: however good another club is in our domestic competition (and those , like me, who take an interest in football will always remember Leicester’s recent championship , whilst I cling to Ipswich’s long ago glory days) they will know that they will have almost no chance of progressing to this supposed elite of competition.

It is notable that this breakaway movement appears to be largely US-inspired, with billions of dollars of backing from JPMorgan. The motivation would appear to be the replication of the elite status of some American sporting clubs in their supposed competitions where relegation, and so failure, has been made an impossibility, resulting in the possibility of perpetual super-normal profits for those clubs who at the point that a League is created are considered exceptional, and so worthy of this guaranteed income stream.

Think about this in terms of economics, and what becomes apparent is that this represents a straightforward intention to lock in monopoly profits for the benefit of these clubs, at cost to the rest of the Football League, football fans, society at large and the whole idea of competition which should underpin sport.

Competition is also, of course, meant to underpin markets, and in the very real sense football has retained at least some elements that looked like a marketplace. Just ask an Ipswich Town supporter and they will tell you all about the consequences of underachievement.

So, what is being played out in the very obvious battle over this issue to come is something much more significant than a straightforward fight over who may, or may not, play in the most exclusive football competition in Europe. It is, instead, a simple fight over the right to the income stream that this competition generates to which these clubs want exclusive access. It is about, therefore, whether they believe in markets and competition, or whether they wish to simply exist to exploit.

That the clubs have chosen exploitation is hardly surprising. Their fans did, long ago in most cases, lose any effective say in the management of these clubs, many of which have been the plaything of the ultra-wealthy for some time. The alienation between supporters and shareholders has, therefore, already become almost complete. That the supporters who turn out to watch the clubs have also ceased to be the major customer has hardly gone unnoticed, and the trend has only been reinforced by coronavirus restrictions, which have not greatly fettered the ability of these clubs to survive. These clubs now live in a world or property rights, mainly sold through television and online, all of which exists to extract maximum revenue, irrespective of consequence.

This is what corruption of markets looks like. It is curious to notice that in Germany, where football supporters continue to dominate the ownership of football, no club has signed up to join this new league. I very strongly suspect that if supporters continued to control football in the UK this would also be the case. But, they don’t, and it is a convenient fiction beloved of economics professors, regulators and politicians that this model of shareholder supremacy still exists when the reality is that nothing like it dominates most of business as we know it, where competition is to the greatest possible degree eliminated from the business risk scenario by those who dominate markets, and exploitation is the norm.

This is why challenging this reform will impose a significant risk for the UK government, if they choose to do it, as Boris Johnson appears to have indicated they might. To take on football would imply that they will take on other forms of abusive structure within markets, which are of course the very thing which much of Tory party politics exists to promote.

Access, influence, contempt for competition, and a desire to cream an income stream off customers and even shareholders, who are treated with contempt, are the prevailing characteristics of the supposed market that elites favour. Cameron’s debacles are evidence of that, as is all the cronyism of the Covid era.

This is precisely why I am not expecting any meaningful reaction: the arguments will be that the market must decide when it will be known, without a doubt, that the market has ceased to function, and that all the structures that have been put in place to pretend to regulate it are merely there to serve the perpetual advantage of the elite who abuse the idea to which they pay lip service.

As a result this move is particularly interesting. It will tell us in which direction the UK is really moving. In France and Germany it would seem as if there is reluctance to support the abuse inherent in this proposal. It is hard to imagine our current government opposing such abuse. It does, however, provide a perfect opportunity to highlight just exactly what is happening within our economy as a consequence.

This is an opportunity that should not go to waste. People don’t like being abused, and the abuse of people is exactly what this proposal is about. We need to shout about it.

Jason Hickel – Apartheid in the World Bank and the IMF

These institutions were designed with colonial principles in mind, and they remain largely colonial in character to this day. Jason Hickel is an academic at the University of London and a Fellow of the Royal […]

Richard Murphy – What are the questions that the G7 finance ministers tax deal gives rise to?

Richard Murphy, who is one of the true experts in this field, takes a closer look at the G7 “tax deal”. Richard Murphy is an economic justice campaigner. Professor of Accounting, Sheffield University Management School. […]

There is probably no economic fallacy that is so difficult to correct than that of  Swabian hausfrau economics (you can only spend what you have -although Swabians are fanatical homeowners, most of which are financed […]