That any sort of agreement has been reached is surely a success, but it all seems to be adulterated with fudge.

Rishi Sunak issued this Tweet not long ago: the video in it can be played:

? At the @G7 in London today, my finance counterparts and I have come to a historic agreement on global tax reform requiring the largest multinational tech giants to pay their fair share of tax in the UK.

?The thread below explains exactly what this means. #G7UK pic.twitter.com/HdcK1HuM91

He followed up with these tweets: 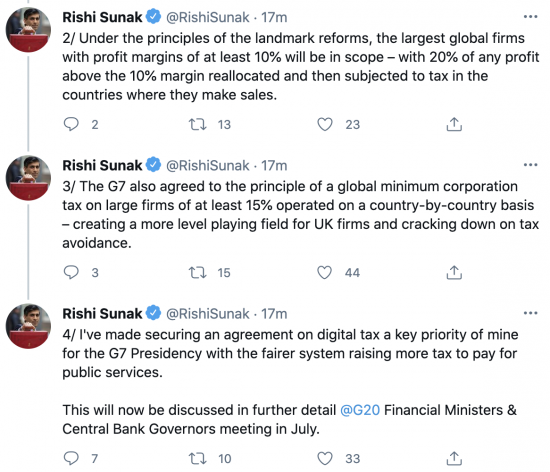 What does this mean?

First, Amazon is not subject to the first part of the deal: its margins are way below 10%. So don’t think this is a solution for all tax problems from multinational corporations, because it is not.

Second, there are other companies in scope who might be surprised. For example, Astra Zeneca had a ten per cent margin in 2020, not 2019, so there are real issues here. Defining just what the margin is within a company, and whether one year alone is going to be enough to trigger the charge is going to be a big negotiating point. I can see costs previously dumped in the statement of comprehensive income or movements in equity suddenly creeping back into the income statement to avoid this change if we are not careful.

Third, just what tax paid is will also be an issue. For example, in 2021 Tesco plc had a current tax paid figure in its income statement of £178 million, but credits elsewhere in the accounts of £188 million, meaning it actually had a current tax credit of £10 million. So what is tax paid in that case? This is going to be a thorny issue. And let’s also be clear, this must also relate to current d=tax and deferred tax cannot be taken into account.

Fourth, the accounting for tax is now a really, really big issue as a result on which much more needs to be done, and the OECD does not have a good record on this issue.

Fifth, who wins here? This depends in part on where sales are defined to be. If sales are said to be in final destinations and not the places from which shipping takes place (and that is likely) then developing counties lose out badly here, which is not what I would want.

Sixth, you can be sure that all the UK tax havens plus Ireland, Cyprus, Luxembourg, Malta, and the Netherlands will all now be lobbying furiously to get this changed. They lose, and in some cases quite badly. I will not be crying for them: that was the aim. The USA, France, Germany, Itlay and Span win. Where is the UK? Hard to tell, not least because of our intimate relationship with our tax havens and the fact that this deal so badly undermines the way they support the offering from the City of London. And as I note, how the deal works for smaller, let alone, developing countries is hard to say.

Seventh, tech companies will undoubtedly take a hit, but not by as much as I hoped, and the US may well gain most from them.

And let’s go for the overall summary as the eighth point. This is historic. Nothing like this has been done before. I am actually slightly amused to even note that in Rishi Sunak’s comments he uses much of the language I have used for years about what tax compliance is, which I have defined as:

Tax compliance is seeking to pay the right amount of tax (but no more) in the right place at the right time where right means that the economic substance of the transactions undertaken coincides with the place and form in which they are reported for taxation purposes.

So, this is a big step forward in creating cross border taxing rights.  But the devil is very much going to be in the detail and the need to get the interaction between accounting and tax right here is going to be very critical and very, very few people look at that. Without that issue being addressed this could be gamed into being almost irrelevant, and so there is a lot of robust negotiating to go.

Dear Reader (or Potential Reader), We’re all trying to make sense of the past two years and what that means for our future. More than ever before we’re learning to recognise that, rich or poor, […]

Jonathan Cook – Avatar makes us long to be Na’vi, while dooming us to remain murderous humans

Had we looked inwards rather than so aggressively outwards, we might live in a Pandora, not the last stages of the Anthropocene. Jonathan Cook is the the author of three books on the Israeli-Palestinian conflict, […]