No one seems to understand that Brexit was not about a conflict of systems, but a conflict of elites. As we see with COVID responses of the UK and the EU, there are still no real differences in the systems. The same is true for climate change responses.

It’s always tempting to kick an opponent when he’s down; particularly when the opponent is Boris Johnson. But it would not be right to assume that the Dominic Cummings “unsubstantiated allegations” are true before the evidence is presented and the case for the accused is heard. So I will reserve my judgement and tease out the pleasure of the spectacle.

The purpose of this article then is to pose the question of whether Europe has fared any better than the apparently chaotic performance of the UK when it comes to pandemic management?

The following chart would suggest not to any significant extent and suggests that they have more in common than many thought. 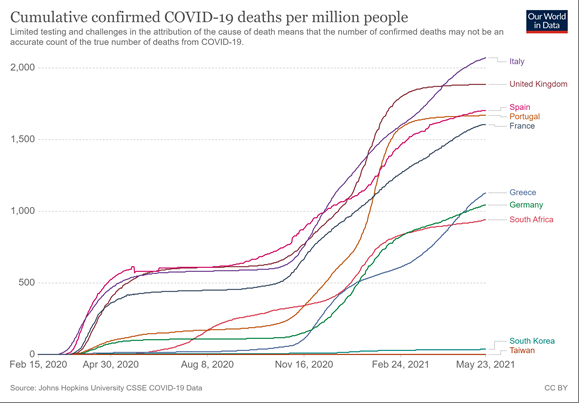 Just as Johnson got it into his head that the British people would put liberty above life in not halting flights from infected parts of the world, in not identifying and putting into effective quarantine infected people, and not contacting and isolating close contacts ; so the European Union got it into its head that “free movement” was more important than life itself; and that despite pandemic management being an obvious candidate for a group of nations to manage together it seems that it never got around to doing very much about it, despite serial warnings from the WHO .

Thus, in both Britain and the EU, countries appear to have been badly prepared, lacked crucial capacity in their healthcare and social care systems, had failed to have sufficiently robust plans to prevent infected people entering the country, had no effective systems to test, trace, isolate, and support infected people; that a policy of denial and dithering dictated at the very time when the WHO were expecting nations to swing their contingency plans into immediate action; and then in a panic cleared untested ill people from hospitals into care homes without adequate PPE (in the UK at least) either for its staff or for its residents (with the inevitable consequences). Although the impact across Europe in localities and countries varied it was only true up to a point as the chart above reveals. Those countries in East Asia and in New Zealand and Australia who did better had learnt the lessons from SARS, had better prepared in line with WHO guidelines and knew what to do.

Why did both the UK and the EU fail?

In the UK it is easy to point to its leadership; its attitude to spending money on healthcare capacity and social care compared to cutting taxes; an exceptionalism that sees the WHO as for developing countries alone; and a state apparatus which finds it difficult to respond quickly when needed, to admit its mistakes, to be open and transparent with its citizens, and which frets about balancing its books as the boat is sinking.

But is the EU any better equipped?

Despite pledges to harmonize, the transfers of resources to enable harmonization remains elusive.

Instead economic performance varies greatly and the EU as a whole is set to lag substantially both China and the US. 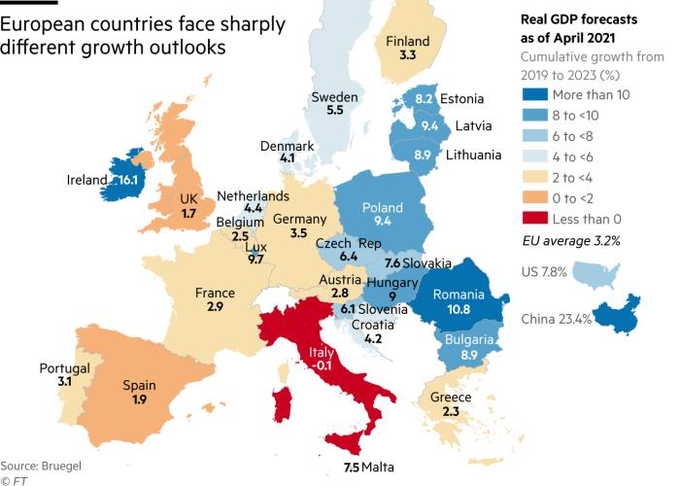 Transfers are not possible because of the attitudes of the winners in the EU internal market. Whatever investment is provided is small in relation to the need and in comparison with investment in China and the US.

Despite the obvious benefits of a larger bloc of nations for defence, security, and public health these have been neglected in favour of promoting the penetration of its internal market by lightly regulated multinationals, promoting the withering of the state and the privatisation of its state run enterprises, weakening the bargaining position of its workers in the jobs market, and the EU has failed to co-ordinate effective action between its members to rapidly develop public infrastructure e.g. high speed broadband, or to counter climate change. It thus lags in economic performance and in its ability to counter future threats. Its machinery of government is too small and underfunded and defers to national states. It thus remains trapped as a juvenile state of being big on ambition but short on capability. The policy of supporting an “inevitable drift” to integration and to seize opportunities as they arise to fill strategic gaps and thus to “fall forward” into further integration is both supine, raises suspicions, and ends in being counterproductive.

It was almost as caught short as Johnson on its COVID response and well behind the UK in the race for vaccines.

It appears therefore that surprisingly, despite all appearances to the contrary within the Cummings revelations, the EU is not surpassing the UK in its pandemic management. If Johnson (and Trump before him) has set a low bar then the EU has failed to do much better. Neither is it taking the lead in developments or protecting its citizens from big threats. It is not harmonizing but exacerbating differences between countries, provoking national reactions and political uncertainty (with knock on economic consequences).

If the COVID pandemic is not a wakeup call I don’t know what is.

NICK DEARDEN: The WTO matters more than ever – here’s what you need to know about its summit

Is a neoliberal dream being reborn in Latin America? It’s not got off to the best of starts… Nick Dearden is director of Global Justice Now. Cross-posted from openDemocracyUK     ‘Latin America returns to the […]

An outstanding interview with insights into the current economic and political situation in Italy Sergio Cesaratto teaches European monetary and fiscal policies at the University of Siena. He is author of Heterodox Challenges in Economics […]

Richard D. Wolff – The Consequences of Inequality Can Be Fatal

The effects of Covid are much greater for the poor and even the middle class than the rich. This is not a biological phenomena, but an economic one. Richard D. Wolff is professor of economics […]