The movement for a new constitution is changing Chile, the country where military rulers embarked on an early and violent experiment in market reforms. 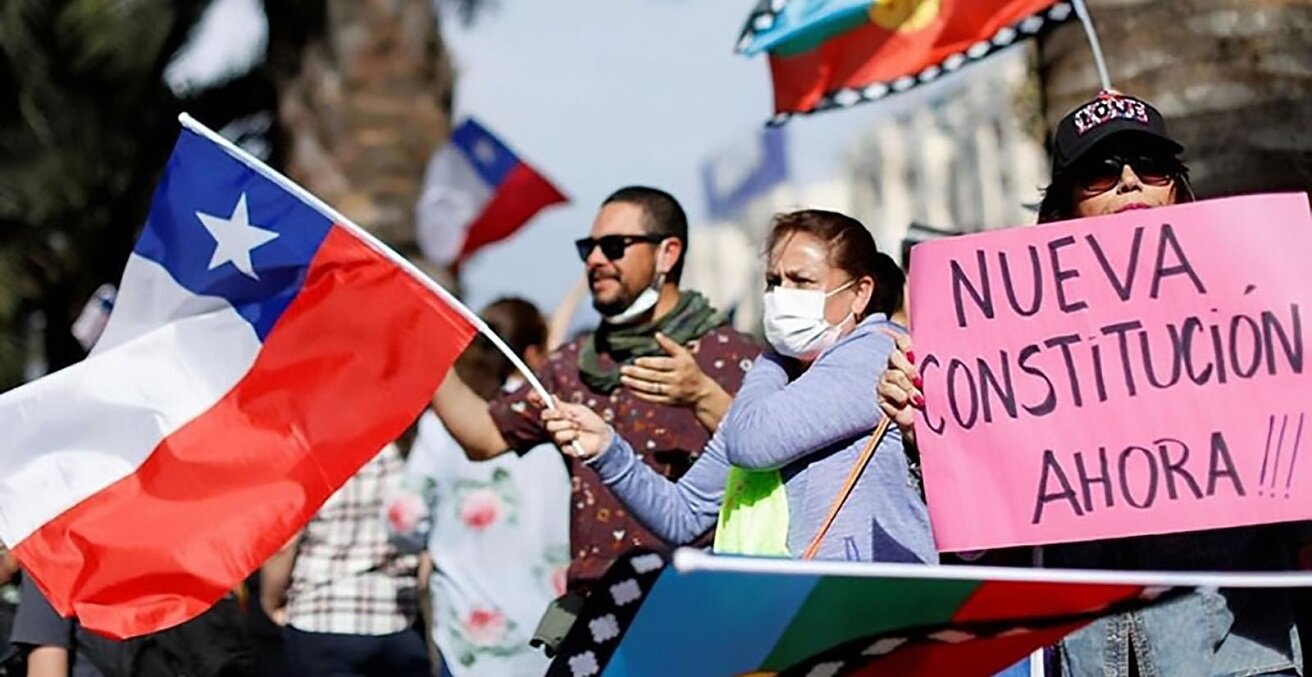 Over a year and a half ago, in mid-October 2019, Chile experienced a wave of massive protests calling for structural changes and these self-organised marches reached a level of coordination and magnitude unprecedented for decades in the country. The social upheaval, which started against the increase in public transport fares, installed one of the deepest political crises of the last period, giving way to demands for the fall of the current constitution, elaborated during the dictatorship of Augusto Pinochet in 1980 , validated by the redemocratization governments.

In response to these revolts, the Chilean national congress called a plebiscite, institutionalizing the constituent process that had already begun in the streets with popular organization. Despite the numerous criticisms of the agreement of November 15, 2019 (“Acordo por la Paz” [Agreement for Peace]) between parliamentarians to establish a popular consultation, citizens enthusiastically attended the polls. And the results of the referendum finally ended up reflecting not only the plural social effervescence of the “estallido social” (social explosion) of 2019, but also decades of demands for profound transformations.

Still facing the complexities of the pandemic, the Chilean people went to the polls on October 25 in 2020, and with the highest voter turnout in the past 8 years, chose to end the Pinochetista constitution. With a resounding result of 78.27%, the option to derogate from the neoliberal constitutional text was achieved, and with 78.99% it was decided that the drafting body would be composed of members fully elected to conform to the constituent convention. The 2019 cry of indignation was legitimized with a significant and undisputed presence at the polls (50.9%), when a country with a history of low electoral participation managed to change the country’s politics deeply .

After the triumph of “Apruebo” [Approve] and “Convención Constitucional” [Constitutional Convention] in the plebiscite, and as a result of the increase in the numbers of Covid19 contagions, the government of Sebastián Piñera postponed municipal, regional and 155 assembly elections from 10, 11 and 15 April 1to 16 May. Amidst an unequal dispute with the candidacies raised by the economic elite and the invisibility of the proposals and campaigns of the left, the people answered the call to choose their representatives. And once again, the citizenry voted to be consistent with the outcry of the 2019 social uprising, and also to bury the parties that form part of the “political duopoly” (traditional right and center-left), those that ruled for 30 years of democratic transition.

A light of hope

In response to the clamor in the streets and to protect the constitutional process, Chile took a sharp turn to the left. The message to the political parties that formed part of the democratic transition was clear, and both the official right and the center left suffered a historic defeat. However, more than a punishment to the traditional political elite, it is important to highlight that the excellent results of the last election are due to the articulation of popular struggles and social organization. With the 2019 revolt, the country saw a growth in politicization and social organization in neighborhoods, among organized football fans, cyclist collectives, popular assemblies raised in occupations for decent housing, “olla comunes” – instances of community participation raised by women. There were more and more feminist collectives exploding in every corner of the country, in addition to the interest in discussing the constituent process.

Without a doubt, this was the cry that was heard at the polls on 15 and 16 May, when an electoral process unique in Chile’s history marked the new victory of leftist forces in the election of Constitutional Convention, municipalities and regional governments, the latter being carried out by direct vote for the first time in the country. A surprising result that reduces the right to the place of a minority in the constituent process, even though it is over-represented with its 37 elected representatives (23.9%), however, without reaching the two thirds quorum established by the “Agreement for Peace”, criterion that could obstruct the deep transformations of the Constitutional Convention. Fortunately it wasn’t like that.

The big surprises in the election of the constituent assemblies were the “Lista del Pueblo” (The List of the People), a pact that formed mostly candidacies of social fighters and won 16.1% of the seats; and also the independent candidacies, which total 41 assembly members distributed in different lists. To close the great result of the left forces, the “Lista Apruebo Dignidad” (List of Approve Dignity), a pact of the Chilean Communist Party and Broad Front – a radical left coalition that emerges in 2017, formed by leaders of the 2011 student movement – was the great winner among party coalitions with 18%, of the constituent seats.

The Chilean constituent process was marked by the principle of parity, a demand raised by women, and which also elected 17 representatives of native peoples with reserved seats. Such mechanisms of equity and historical reparation mobilized feminists and Mapuche indigenous peoples after the Agreement for Peace to influence their participation in the construction of the new Constitution. Regarding the municipal election, there was a renewal led by the left and a significant rise of women to positions in city halls and as councilors. One highlight was the election of Irací Hassler from the Communist Party, a 31-year-old feminist who defeated Felipe Alessandri from the National Renewal (the party of rightist President Sebastian Piñera) and will be the new mayor of the commune of Santiago, the capital and largest city of Chile.

The List Approve Dignity was also successful in the Region of Valparaíso, electing as governor Rodrigo Mundaca, a long standing social fighter in defense of water as a universal right in Chile, in addition to guaranteeing victories in the city halls of the cities of San Antonio, Valparaíso, Quilpué and Villa Alemana, almost all led by feminist women. A resounding success that will undoubtedly mark the trend for the presidential race that takes place in November 2021.

The struggles that built today

The “estallido social” (social explosion) that had already taken place in the first months of 2020, added to the context of the health crisis, unquestionably highlighted the main failures that Chilean society had already been denouncing for years. The Chilean working class, it should be remembered, was not until that moment on a sleepwalking and lethargic pilgrimage inside a false propaganda of democratic stability and the overcoming of poverty. During the last 15 years in the country, the struggles in defense of the environment, the feminist movement and the student movement (in 2006 with the “Revolución Pingüina” [Penguin’s Revolution] and 2011 with the “Revolución Estudiantil” [Student Revolution]) have given the guidelines to reconfigure the collective political sense, placing the crisis of the neoliberal model at the center of the public debate.

Beyond the student movement, We must emphasize the strength of the Chilean feminist movement, which was also the protagonist of this awakening. The uprisings of 2019 and the opening of a constituent process – which will write the first joint constitution in the world – cannot be explained without the organizing and convening capacity of feminists. Not now, not at other times. Feminists played such a fundamental role in the entire process of social resistance in Chile, not only in the current constituent process, or when they massively led people again to question institutional violence in 2018. It is important to remember that Chilean feminists also have a history of powerful resistance against the Pinochet dictatorship.

A feminist historical legacy that adds strength and recognition, not only in academic spaces, but appropriating everyday discussions, establishes the need for a political dispute to achieve a structural change in social relations. Without a doubt, the feminist struggles in Chile today, as well as the student movement, are part of a continuum of unified struggles. Struggles that question how commercial education serves to maintain the sexual and reproductive division of work and care, which point to the feminization of poverty that the Chilean neoliberal system reproduces in its privatized pension system, which denounces the fierce precariousness of life through defense of profit in all areas.

In this way, the entire process that has taken place in Chile since October 2019 was more than anything a political opportunity to challenge, that is; to challenge the neoliberal model and demand the construction of a new country, with a feminist, anti-colonial perspective , anti-predatory and economically extractive, anti-racist, and also claiming a plurinational state. Nevertheless, one of the central challenges is to convert this force expressed in the ballot boxes into an organizational force that does not loosen the constituent process, taking up the “cabildos” (instance of direct representation of the communities) and linking them with the elected representatives. Above all, it remains clear that it is necessary to continue fighting so that our efforts do not end up again redesigning another neoliberal social agreement, this time renewed and legitimized by the ballot box.

Stephanie Searle – Will Someone Please Tell Me if Biofuels are Good or Bad for the Environment?

Biofuels are confusing because they’re complicated, and they’re complicated mainly because of indirect effects. Stephanie Searle is Program Lead at the International Council on Clean Transportation (ICCT) Cross-posted  from the ICCT Website   Few environmental […]

The cases of Carole Cadwalladr and Paul Mason reveal how readily celebrated media figures are recruited to the intelligence services’ covert information war against other journalists. The case of Paul Mason (see second half of […]

ICCT – How to think about vehicle bans: An update after two major European judicial decisions

This article may be somewhat overly optimistic. There has been no real change up to now. Even in the United States Volkswagen could buy driving rights for its diesel powered cars. By Drew Kodjak, Executive […]