With European Union elections on the weekend and all the talk of the noble achievement’s of the EU, if one looks around the Union one finds the opposite, brutal police repression in France against the Yellow Vests, a mafia state in Malta, thousands drowning in the Mediterranean Sea, climate destruction out of control –  and political prisoners in Spain in front of a kangaroo court. Is this the EU everyone is supposed to be so enthralled with? 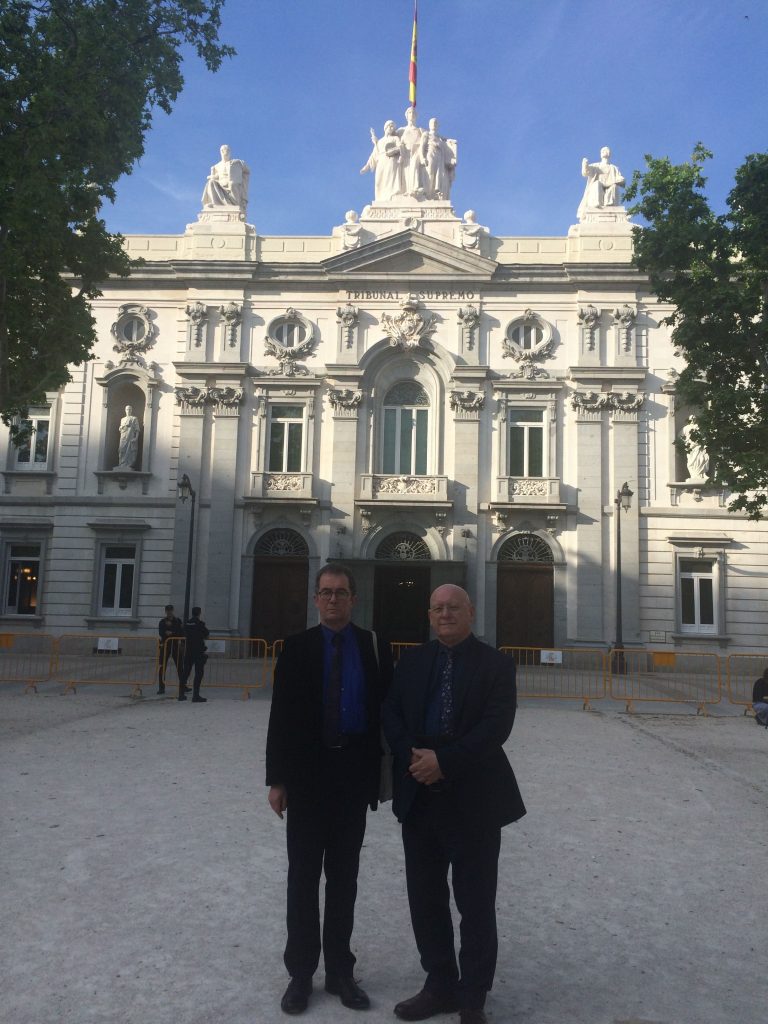 On the ceiling of the Spanish Supreme Court Room there is a mural showing Justice delivering her punishment on odious looking villains- a murder, a rapist, a thief and a woman committing infanticide. On Thursday I took my seat to observe the trial alongside Hywel Williams MP, chair of the Westminster All Party Parliamentary Group on Catalonia. Under that mural sat the accused, but they were not child killers or rapists, they were 12 Catalan political and civic leaders on trial for their part in organising the 2017 Catalan independence referendum. Two have been held in custody since that autumn awaiting a trial and a verdict.

Behind the formal correctness of the court and the politeness with which we were received lay something almost surreal. This is a political trial in a state which claims to have no political prisoners. A political problem, the relation between Spain and Catalonia, is being decided in a criminal court by judges including political appointees.

Sitting on the prosecution benches are two legal representatives of the fascist Vox Party. On Thursday they said little but their presence is sinister. At the close of day as they left three bodyguards waited for them.

As we entered the court the defendants were already there. We exchanged waves, thumbs up and victory signs with old friends: Carme Forcadell, former Speaker of the Catalan Parliament, Jordi Cuixart, President of Omnium, the mass cultural organisation, and former Catalan foreign affairs minister, Raul Romeva.

Carme is as elegant as ever but looks drawn and fragile, that last is not true she is of stout Catalan peasant stock with all its rich history of resistance. As ever Jordi is smiling, that’s his symbol of resistance. He sits informally to the ire of court staff. Romeva is dressed as sharply as always and looks fit. He has just been elected to the Spanish Senate.

Today’s witnesses are mostly experts being quizzed as to the workings of the referendum. The prosecution cannot seem to grasp that there was no cost attached to using publicly owned buildings like schools as polling stations.

Talking to defence lawyers they are concerned that when Spanish Police gave evidence claiming they were going peacefully about their duty on referendum day and were attacked by violent protesters they were not allowed to show film of those same officers smashing their way into polling stations and batoning voters.

When the defence does show those films they cannot comment as to how they contradict police evidence.

Another thing strikes us. Today’s witnesses are Catalan and for many Spanish is a second language. They cannot give evidence in Catalan and there is no simultaneous translation available. Hywel points out in Welsh courts you can choose to give evidence in Welsh or English with simultaneous translation at hand. Same cases, including murder ones, are heard entirely in Welsh is appropriate.

The 12 accused are on trial because they championed the democratic wish of the majority of Catalan citizens – not all supporters of independence- to decide their own future democratically. Something Spain refuses them.

Carme Forcadell represents the sovereignty of the Catalan Parliament over which Spain has ridden rough shod.

In the afternoon during a lull in proceedings we have a snatched conversation with Oriol Junqueras, former Catalan Deputy President, now elected as a Spanish MP and who on Sunday expects to be elected a MEP. As with the others he welcomes the growing international support they are receiving.

At the close we leave the prisoners. We walk out into the evening sun to plan our evening. They will be driven back to prisons outside Madrid, arriving half an hour before visits end. They are woken at the crack of dawn to be brought back to court.

This means the only time they can discuss with their defence team is in the lunch break.

I found it hard to bite back tears as I left them. They expect to be found guilty and receive sentences of 12 to 25 years. They expect the European Court to squash those verdicts but that will take several years. By then Carme will be 70. Jordi and his partner are having a new baby. She or he will be growing up and their son has had not been with his dad at home since he was a baby.

This trial is an affront to democracy.

Juan Laborda – The Coronavirus and the End of Neo-Liberalism

The Covid-19 is simply going to accelerate the process of global change in China’s favour Juan Laborda teaches Financial Economics at the University of Carlos III and Money and Banking, Syracuse University (Madrid) Originally published […]

Patrick Kaczmarczyk writes that when German policy is viewed from a more long-term perspective, there has been little in the way of meaningful rebalancing. He states that without necessary adjustments being carried out to the […]